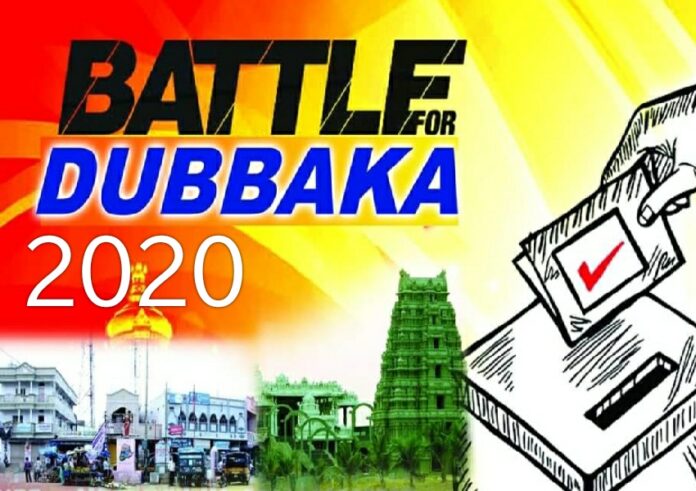 The by-election to Dubbak constituency has become an issue of prestige as well as a key to the fate of many leaders. For the Congress party, the by-election is of greater significance than the Karimnagar Lok Sabha by-election years ago, which was to fill in K. Chandrashekar Rao’s Lok Sabha seat in the-then undivided Andhra Pradesh.

The political strategies of the Opposition seems to be going haywire. The Congress and BJP had taken up the byelection to Dubbak as a matter of great importance. The race is more to grab the number two position so that they can improve their numbers in the GHMC elections and to claim that the people were getting disenchanted with the ruling party.

The TRS on the other hand is looking it from two angles. One, it wants to increase the majority to prove that the people were happy with the government because of the welfare schemes it had introduced in the last six years and retain its supremacy in the GHMC elections. If the TRS improves its majority in Dubbak it can go hammer and tongs against the Opposition saying that the people had rejected the saffron party and the Congress party.

The BJP which claims that they are set to come to power in the next general elections wants to ease out the Congress party. Hence, it has become do or die situation for the two opposition parties. Dubbak will also be a litmus test for the new AICC in-charge of state affairs Manickam Tagore and his strategic skills. He succeeded in making all leaders campaign in the election but the outcome is to be seen.

ALSO READ:  How 'Covid-19 Sanitation Duty Workers' Get Burns, Rashes And Allergy Without Any Safety Gear Provision In Andhra Pradesh?

Similarly, it will also be a test for the State BJP president Bandi Sanjay who was brought in with great expectations that he will be able to take on the TRS government and help the party emerge as a formidable force by the time the next general elections were held. But so far the BJP has not been able to make much of a mark at the ground level.

The Congress party is fighting to not only try to inflict an unlikely victory against the ruling TRS party but must at the very least ensure it gets more votes than the BJP. In order to ensure they at least come a fighting second, Telangana Congress state in-charge Manickam Tagore has appointed state-level leaders as booth in-charges.

The importance of the by-election to Congress became undeniably clear when MPs like Komatireddy took charge of Daulatabad mandal and Revant Reddy of Mirdoddi mandal. Komatireddy declared publicly that he would get at least 100 votes more from his mandal than the TRS. Mr Revant Reddy is striving hard to ensure his party gains an upper hand over the pink party in Mirdoddi. Similarly, former deputy CM Damodar Rajanarsinh, is trying to ensure a Congress victory in Thoguta mandal.

TPCC chief Uttam Kumar Reddy is leading the overall camping across the constituency and aggressively attacking both the TRS and BJP in his addresses, which have been getting good response from the people.

Political lobbies in Telangana speculate that this election could also become a matter of importance for Telangana Congress state in-charge Manickam Tagore. This is the first electoral tussle for the party after he took charge and people wonder if beginner’s luck would be working for him. A victory could spur the party further.

Tagore’s political approach has led to many good changes for the party. With the support of Uttam Kumar Reddy, Tagore has brought great cohesiveness to the Telangana Congress. Both of them are personally monitoring and reviewing every development in Dubbak.

Some political watchers observe that Dubbak by-election might be the flagging off of the Congress party’s official launch of the 2023 assembly election campaign.

Despite serious efforts, scuttlebutt in the party corridors are saying that the party is not too optimistic of a positive result. The ruling TRS party’s aggressive campaign, with its unmatched money power and tacit to blatant support from officials, besides an active campaign by the BJP, is giving the Congress party a tough time.

The Opposition parties plans to highlight the devastation the city had witnessed and how several colonies have been under water about ten days as the government failed to come to their rescue in time. They also want to harp on the issue of lack of proper drainage system and how the TRS government failed to do anything to improve infrastructural facilities despite having absolute majority in GHMC.

Sensing this, the TRS had on one hand entrusted the responsibility of getting bigger margin to T Harish Rao but also is trying its best to see that the situation arisen due to rains and flood does not cast any shadow on its prospects in GHMC. Its true that people in the affected colonies are unhappy that their sufferings were getting prolonged but the ruling party had in a swift move is sending its ministers and officers from door to door to hand over a cheque of Rs 10,000 towards immediate repairs for the damages caused by flooding.

This has come as a welcome measure and many in the affected areas are submitting applications seeking the monetary benefit. This comes as a soothing balm for the affected people. It is also likely to announce a mega plan to make the city flood proof in next three years. The Minister for MAUD himself has been wading through the flood waters in many colonies and trying to reach out to the people.

The opposition parties which could have utilised this crisis as an opportunity to win over the people have lost a chance. Some of the leaders only went round some areas and lashed at the government for its failure to provide proper drainage system but none of them pressed their cadre into action.

They could have taken up distribution of essentials like water and milk or food in the affected colonies and assured them of taking measures to see that the drainage system would be made ready to face the requirements for next 50 years. While focussing on Dubbak they seem to have missed a golden chance once again. #KhabarLive #hydnews