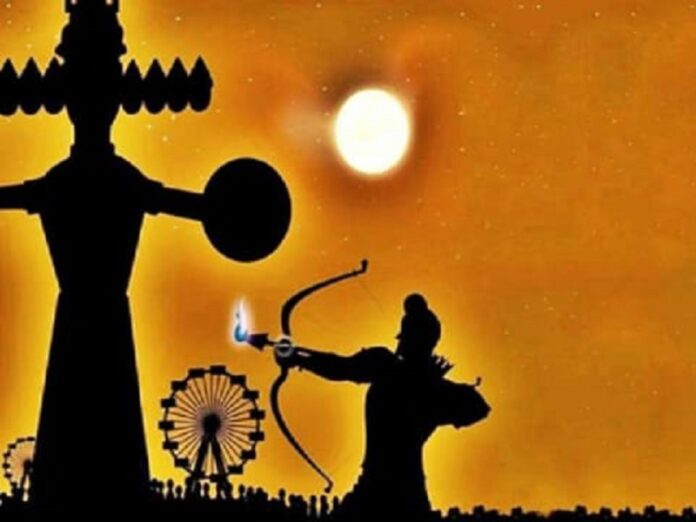 61 / 100
Powered by Rank Math SEO
As the festival Dussehra looming ahead, it is a time of introspection for all Indians. With celebrations this year being encouraged to be low key and can all to use the time, weigh all that is going on around us and seriously think of changing mind-sets, ideologies and thought processes.
The factual Ravana today lives and breathes amongst us till such time we are able to define, understand and follow a well laid out justice system and accountability. Only then can we bid adieu and set fire to the Ravana ‘effigy’ as a symbolic representation, getting rid of the evil around us.
Isn’t it tragic and ironical that in these 9 holy days of Navratri which symbolises the different aspects of the divine feminine principle, or Shakti, revering a form of the ‘Divine Mother’ – I watched a man kick his sister at the airport to get her attention… I saw men ogling at young girls as they walked past on their way to work… I noticed the inherent look of disdain on a man’s face when speaking to an intelligent woman who was unwilling to accept his vitriol. The ugliness is right in front of our eyes, we need to fight it and put a stop otherwise the festering filthy mind-sets will only increase the violence.
Let us also face the stark fact that human lives don’t matter anymore… They are just vote banks – plain and simple. Loss of lives, no matter how viciously and barbarically are lost is accepted with a shrug of the shoulders. It appears that a human life has no worth. It is cheap and meaningless to others. A commoner’s life is worthless in India as there is no concept of laws and safety measures being in place at any given point. The security of human lives is always ignored. It is taken for granted and it is reduced to the lowest stature. It only matters when the politician needs his vote for power.
In reality, law makers and civil administration everywhere will continue to brazenly shrug off all responsibility and display sheer callousness and apathy…as they always do. Even though professional negligence and irresponsible behaviour are akin to committing a crime which means that the guilty should be punished but in order for that to happen, there have to be systems and strictures in place to nail the guilty. Unfortunately, there is no defined structure and hence who do you blame?
We all know that enquiries hold no meaning and yield no results. No one will probably be held guilty for all the atrocities occurred but something has to be done to hold perpetrators accountable…to pin them down when they let down their own people through gross negligence. The anguish and helplessness of all the victim’s families is reverberating through the country. Unfortunately, their cries fall on deaf ears.
We never learn lessons from the past. The Hathras tragedy and all the other despicable crimes earlier should never have happened in the first place. Watch the news and you will notice that every news channel has found a scapegoat – it differs with each channel. They come with their theories after having conducted their own investigations to reach such conclusions.
One thing for sure is that, for the country to move forward, it cannot afford to isolate itself and be stuck in the parochial mind-set. It needs to look outward, compete, and participate in the modern world that displays ethnicity and multiculturalism. As the door of global opportunity is widely opened for us, we are still grappling with the basic problem of violence against women. This is one of the most important issues which we need to address urgently be it at the state or national level. The constitution protects every Indian’s right – no matter what religion or background.
We must move away from the politics of ‘parochialism’ which will not help us progress as a nation. Our leaders are famous for spewing venom and politics is based on religious discord. They leave no stone unturned to create hatred against the minorities. Primitive kind of politics puts at danger the rise of a modern India. It is sad that the government didn’t take him much time in deciding to embrace the sectarian politics of hate, fear and intimidation.
Can anyone bring back the dead? Sadly, such horrific tragedies are not expected to change anything in India’s attitude towards women safety. Therein lies the real tragedy, don’t you think?
We stand at an important inflexion point in the life of our nation. #KhabarLive #hydnews
ALSO READ:  Leading Healthcare Solutions Provider 'Aquity Solutions' Launched 'Medical Scribing Service' In India