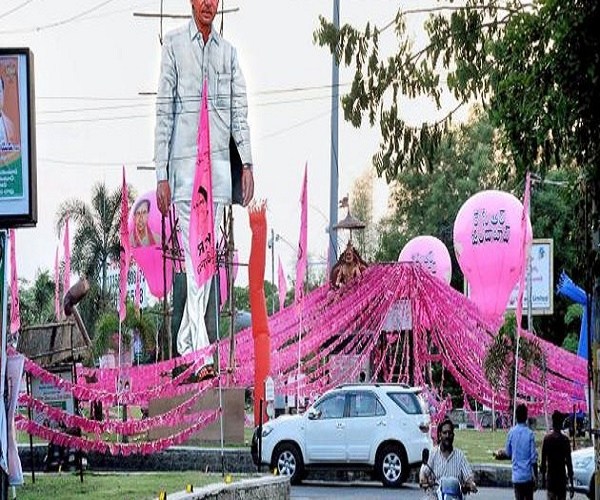 Democracy, practised mindlessly, can be hazardous. One only has to look at the giant hoardings that tom-tom the government’s achievements or scorn its failures, that sprout in every nook and corner of India during elections. The problem: These are mostly made of polyvinyl chloride (PVC) plastic, a major health and environmental risk.

With the mother of all elections slated in a few weeks’ time, the problem will only worsen.

For the 2019 general election, India’s election commission (EC) has suggested that all political parties avoid PVC in their campaign material, considering “the long-term deleterious impact of materials such as plastics, polythene, etc. on the life-giving and life-sustaining environment.”

The EC’s suggestion, though, isn’t part of the model code of conduct, which alone would have made it binding on political parties.

That being the case, PVC hoardings have already lined up outside the New Delhi headquarters of India’s ruling Bharatiya Janata Party (BJP), its rival Indian National Congress, and the Aam Aadmi Party (AAP), in power in Delhi.

Hence, the season provides the perfect backdrop to understand the gravity of the situation.

Toxic, carcinogenic
In India, 90% of outdoor advertisements are printed on PVC and up to 216,000 tonnes of flex banners are printed on the polymer annually, according to the credit rating agency ICRA, a Moody’s company.

Between April 2017 and March 2018, the BJP alone spent Rs147.10 crore ($21 million) on outdoor publicity, according to information released under India’s Right to Information (RTI) Act in 2018. This includes billboards and campaign advertisements painted on walls and vehicles.

The printing spikes during election time. “(In the) two or three months (of the election process), the plastic consumed is as much as in two or three non-election years,” according to Sanjay Upadhyay, a supreme court lawyer and a managing partner of the Delhi-based Enviro Legal Defence Firm (ELDF), which specialises in environment law cases.

To compound the problem, less than 1% of the PVC is recycled, says Upadhyay. Most of the inflammable material ends up in landfills. The degrading PVC then releases toxic chemicals into the earth.

Being a known carcinogen, state governments across India have been keen to cut down on its use, besides that of other such material. The central government, too, has set a 2022 target for a ban on single-use plastics, 13.4 million tonnes of which are manufactured every year in the country, according to the Delhi-based The Energy and Resources Institute (TERI).

In his letter, Mishra recommended alternatives like cloth and recycled paper for campaign advertisements. Cotton cloth takes only between five and six months to decompose, compared with the roughly 50 years for PVC.

“The commission reiterates that all political parties should take adequate steps and measures not to use single-use plastic as campaign materials (posters, banners, etc.) during the elections in the interest of human health and environment,” its letter dated Feb. 26 said.

Around the same time, ELDF’s Upadhyay and his team approached the National Green Tribunal (NGT)—India’s dedicated court of sorts for environmental cases—seeking a ban on single-use plastics in campaign hoardings. On March 04, the NGT advised the EC, the central government, and the central pollution control board (CPCB) to meet and consider such a ban.

But can mere advises get political parties to act?

“Unless they are binding in nature, it doesn’t help anyone…My hope was that if this (a ban) becomes part of the model code of conduct, that’s a definite way of limiting it (plastics),” says Upadhyay. Citizens could then have reported violations using the recently-launched cVIGIL app.

The Congress, AAP, and BJP did not respond to requests for comments for this story. The EC and CPCB didn’t either.

Not all is lost
Meanwhile, on March 12, the Kerala high court directed political parties to avoid PVC-based campaign material in the southern state.

“Though eco-friendly products are more costly in comparison to vinyl flex boards, we will use them for our campaign if necessary,” S Suresh, district president of the BJP in state capital Thiruvananthapuram. The Congress, too, is falling in line. “The direction of the election commission has an advisory nature which is not a strict rule. We will try our best to stick to the protocol,” report says.

In Delhi, Upadhyay is waiting to see if the NGT order asking the EC, the centre, and CPCB to meet will be followed. “I was disappointed with the order. It was almost an advisory,” he says. “We may go back to the court asking for the same (meeting) if it doesn’t happen soon, in the next couple of days.” #KhabarLive