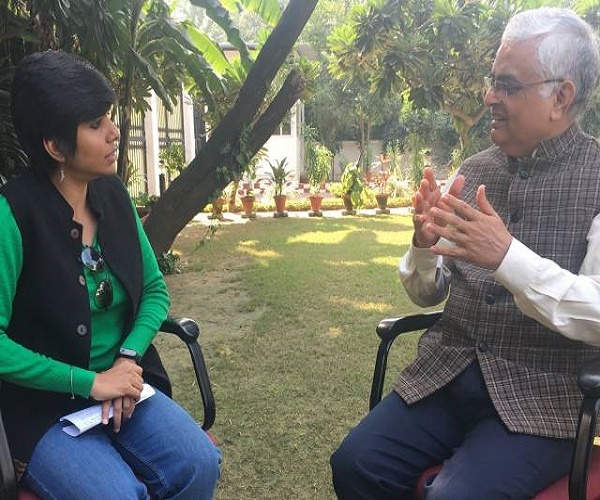 Electoral Bonds will make the whole system quite opaque and this may be quite dangerous. The electoral bond system will create vulnerabilities in campaign finances (donations), making the democratic system vulnerable to manipulation.

In an exclusive interview to #KhabarLive, former Chief Election Commissioner OP Rawat talks about electoral bonds being used as a tool for political funding, their impact, and the challenges that he faced during his tenure as CEC. Excerpts:

The Election Commission wrote to the government about its concerns over electoral bonds. Do you think electoral bonds scheme is a threat to democracy?

The electoral bond system will create vulnerabilities in campaign finances (donations), making the democratic system vulnerable to manipulation. (It can be done) In a manner that money, from unknown sources that have dubious credentials, routed through KYC, individuals or corporate identities, can find its way into the electoral arena and vitiate the electoral process. That risk may remain. Even foreign money can trickle in. And if one starts enquiring, then there is no anonymity. Electoral Bonds will make the whole system quite opaque and this may be quite dangerous.

So, revealing the source of political funding is very important?

It is very important for the democratic system.

Was the Election Commission consulted before electoral bonds were introduced?

Do you think EC should have been consulted?

It is not laid down, so as law or a legal system, it is not there (not mandatory). But since it concerns political funding, in a democratic setup, things that are done after consulting all the stakeholders are generally more acceptable.

The Controversy of Hidden Numbers on Bonds
#KhabarLive did a report on electoral bonds that showed that there is a hidden alphanumeric number, which can be seen only under ultraviolet rays. What do you have to say on that?

Do you think there’s a higher possibility of black money being used for political funding?

Actually, it is (like) getting into a black box, which is not known to anyone. Until some sort of research is done, saying anything on it will be wrong. But whenever there is opacity, you make the system vulnerable because one doesn’t know what is coming in, from where, and what is the character of the money. The second thing is, if you are saying that the KYC is there and you can inquire (about the identity of donors), then the entire purpose is defeated.

ALSO READ:  How 'Free And Fair Elections' Will Be Conducted In Telangana For Legislative Assembly?

Can EVMs be hacked?

EVMs can’t be hacked. All EVMs are standalone, (they’re) not compatible with WiFi or Internet. They can’t even be connected with electricity mains as they have batteries. Everything is isolated from the outside world, nothing can be done to the machines. The only thing is that if the machine gets out of our administrative security regime, then anything may happen, and that can happen to anyone.

Paid news has been controlled to a large extent. What we have found is that the moment notices are issued, a candidate immediately admits that ‘yes, the money was paid by some of our workers, so please add this to our account.’

Has the EC noticed a spike in incidents of paid news recently?

It has, because there is a total change in the ownership of the media, and political parties and candidates have started buying these assets. They (parties) have started buying Media channels and newspapers. One day, in a newspaper of a state, I didn’t find any news except for eulogies about the owner and the owner’s party.

It was paid news. EC took note of that. We issued notice to the person that the law is simple: If you have paid for news and you admit to it, the expenditure will be added to your account and nothing more than that. But if you deny and it is proven later that it was paid news, then you stand disqualified for three years.

What would be the biggest challenge for the EC in the coming days? And how did you handle it?

The abuse of money or distribution of freebies and liquor was the first challenge. The second (challenge) is fake news, paid news and media issues. The third is social media, where data harvesting and profiling can influence voters’ behaviour in a manner that is not healthy for a democracy. We faced this during my tenure and it will continue to be a challenge not only in India but globally. Everybody is doing something or the other in regulating and checking these threats.

Why is there a delay in counting after polling is over?

Counting cannot happen because there is a system laid down. After polling, EVMs and other materials are deposited and the next day, the general observer, in the presence of political parties, has to conduct a scrutiny, which is video-graphed. The scrutiny includes checking papers, accounts, vote accounts, voters’ accounts… everything. (Counting starts) When he or she is satisfied that everything is perfect and nothing wrong happened at the polling station. If there are any discrepancies in the polling station, the observer recommends re-polling.

So one day for scrutiny and one day for re-polls. In re-polls also, something could go wrong, so one day for that too. That’s why a minimum of three days are required.

But what about Chhattisgarh polls that took place weeks before?

The Chhattisgarh result would have influenced Madhya Pradesh. So all votes have to be counted on the same day. You can’t have one state declaring results and the other one going to polls because it will influence voting there.

Can India go for elections simultaneously in Centre and states?

We went on simultaneous elections in 1952, 62, 67. After 1967, some constituent assemblies went out of sync. Now there is a need to bring them back into sync, and for that, we need to make some amendments in the Constitution, amendments to the Representation of the People’s Act.

The EC was asked about it in 2015 and the commission give suggestions that certain changes are required to be made, and then we can go for simultaneous elections. For this, the logistics will be required, like the number of machines, security personnel, etc.

Currently, the government appoints the chief election commissioner. Do you think it should be changed?

Any system of shortlisting and appointing that is transparent and objective will always be welcomed. There was a petition in the Supreme Court. In fact the Supreme Court had given this matter to a five-judge bench. The court had once observed in this matter that the government has not enacted a law for the selection of the Election Commissioners, which was stipulated in the Constitution.

But it is quite satisfying that whosoever the government has appointed so far, has conducted themselves in a politically-neutral manner and that is very satisfying. Even in the current system, there has been an objective selection of these functionaries. So it depends. Vulnerabilities will be in the other system as well, which is curated through law.

What are the things you couldn’t undertake during your tenure that you feel you should have done before your retirement?

The Commission’s concerns about laws – Representation of the People Act 1951, Conduct of Election Rules 1961, Electoral Registration rules 1960. These had served us very well. But now, times are changing. Social media and the use of money are emerging threats that are becoming bigger by the day. To address these threats, we need to realign laws and rules in a manner that we can check them based on the global best practices.

So we had constituted a group of officers to review these laws and rules, and we submitted the reports. Unfortunately, this year had been full of elections and the commission was busy. So it could not go through the recommendations and suggest amendments to the Law Ministry. That regret will remain with me because it is a dire need for any election. We should have revamped the system. #KhabarLive