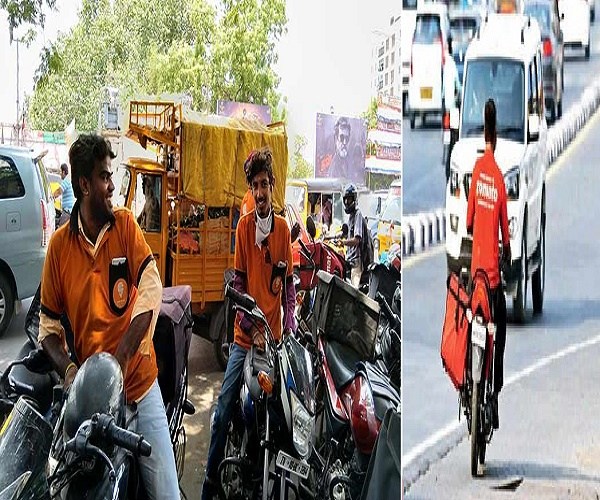 Rash driving, jumping signal, driving on the wrong side of the road, driving without a helmet and tampering the vehicle number plate to avoid being penalised – complaints of traffic violations by the food delivery executives in Hyderabad have been mounting, the Cyberabad Traffic police said. The Cyberabad Traffic Police have observed that many delivery executives have been violating traffic rules, including tampering their vehicle number to avoid being penalised.

Speaking to #KhabarLive, Cyberabad Deputy Commission (Traffic), Vijay Kumar said, “We have been receiving overwhelming complaints on our WhatsApp number and Facebook page about the reckless driving of food delivery boys. Pertaining to this, we had called the food delivery representatives on several occasions to put an end to this menace.

However, they remained unresponsive, stating that they don’t have any association with the food delivery executives and that they should be treated as individuals. But we cannot treat them as individuals anymore. The food companies should be held accountable for their actions.”

The DCP said they would have a second review meeting with food delivery companies, asking them to put a mechanism in place to put the executives on ‘surveillance’ when they hit the road, to carry out adequate verification process of the candidates and counsel them periodically on road safety.

Whose fault is it anyway?

“We don’t have much pressure from companies to deliver food on time. However, in case we get delayed due to traffic or other reasons, the customers call us repeatedly. Due to this, we ride faster or even break traffic rules sometimes,” a food delivery executive told #KhabarLive, on the condition of anonymity.

According to him, between 11 am and 4 pm and 7 pm and 10 pm, they receive a considerable number of orders, which have to be delivered on time.

Mohammed Imran, a delivery executive from Swiggy, on the other hand, blames the delay on the restaurant. “We have to deliver the food in one hour. But mostly the delay is at the restaurant, which at times, takes half an hour. And to compensate the time loss, we rush. We cannot hold the customers at fault for rushing us off our feet; they must be really hungry and hence call us repeatedly,” he said.

Imran also points to the greed for incentives as the reason for the traffic violations by his co-workers. “We get incentives if we deliver more orders. This pushes our fellow workers to disobey the traffic rules,” he told #KhabarLive.

Echoing Imran’ views, another delivery executive, Sheik Younus said, “The intention to make more deliveries and earn more money force the delivery executives to often flout the rules. Once an order is completed, we immediately receive the next order. So they want to finish the orders quickly, to pick up fresh orders.” #KhabarLive