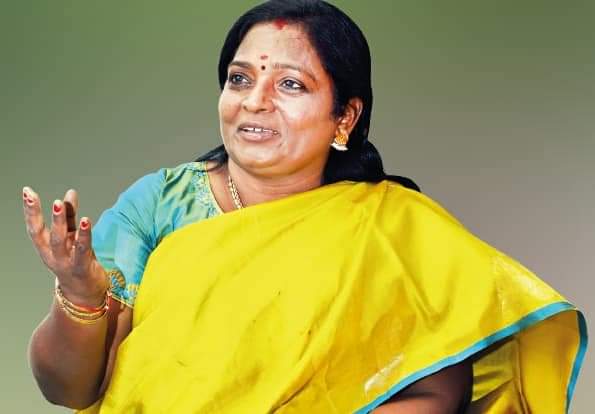 Governor comments on the state government’s handling of Covid-19 situation has make to erupt on ignited a fresh row with the ruling TRS finding fault with her and the opposition parties defending her.

While the defence by the Bharatiya Janata Party (BJP) was expected, what came as a big surprise was the main opposition Congress suddenly supporting the Governor.

BJP leaders launched a counter-attack on the TRS but the Congress went a step ahead and urged the Governor to send a report to President Ram Nath Kovind about the TRS government’s “complete failure” in handling the Covid-19 situation.

“If the government has failed to respond to the Governor’s suggestions, she must use her discretionary powers to send a report to the President,” said state Congress leader Gudur Narayan Reddy.

He also urged the Governor to make public the letters she wrote to the state government giving suggestions on Covid-19 situation as people have a right to know.

The Governor, herself a doctor, is mincing no words in highlighting the failure of the KCR government in the pandemic management. She has been pulling up the government over testing, containing the spread of virus, or providing treatment.

ALSO READ:  What Is The Best Time To Buy Property In Hyderabad?

While the TRS has largely been ignoring the Governor’s comments and her tweets, party legislator Shanampudi Saidi Reddy stirred up a hornet’s nest by stating that she was acting like the BJP President. “Sorry to hear that the Governor of Telangana is acting as BJP president. Our beloved CM is a role model for most of the states,” tweeted Saidi Reddy.

The MLA later deleted his tweet, apparently on the direction of the party leadership.

A section of the party leaders believe that reacting to her remarks would give them more public attention. Party sources say the leadership has asked the leaders to simply ignore her comments.

Saidi Reddy’s outburst against the Governor was sparked by her remarks in a recent interview to a news channel.

Soundararajan, during the interview, expressed dissatisfaction with the Telangana government’s poor rate of testing and its reluctance to engage private hospitals for testing initially.

She even alleged that Chief Minister K. Chandrasekhar Rao did not take her suggestions to handle the crisis in the right spirit, and did not return the courtesy of responding to her. “I had written 6-7 letters to the Chief Minister. My views should have been considered as sensible and not sensational,” she was quoted as saying.

Last month, Chief Secretary Somesh Kumar and then Principal Secretary, Health, Shanti Kumari had reportedly defied the Governor by skipping a meeting with her. She had called them to Raj Bhavan for a meeting to discuss the Covid situation but they preferred to give it a miss, citing preoccupation with some other meeting.

The Governor took to Twitter on many occasions to express her concern over what she called poor testing in the state. Her statements, her sudden visit to Nizam’s Institute of Medical Sciences (NIMS) to interact with Covid patients and her virtual meetings with eminent people including a former Health Secretary, a former Director General of Police, researchers, members of Indian Medical Association and representatives of private hospitals to take stock of Covid situation all have not gone down well with the KCR government.

The state government has an uneasy relationship with the Governor, considering her background as the BJP national Secretary and President of the party’s Tamil Nadu unit.

Political observers say her comments provided ammunition to the opposition parties to step up their attacks on the TRS government.

Last week, the Governor expressed concern over a new study that at least six lakh people in Hyderabad may have been infected by Covid. With her tweet, she tagged a report of the study conducted by the Centre for Cellular and Molecular Biology (CCMB).

She also warned that the state government might find the going difficult in eradicating Covid-19. She pointed out that testing, testing, testing, tracking and treating is the mantra of the World Health Organisation (WHO), and wanted to “re-stress view of WHO unless adequate numbers of testing is done, our efforts to eradicate Covid-19 in Telangana will be difficult.”

Following Saidi Reddy’s outburst, the BJP leaders launched a counter attack on the TRS, accusing it of undermining the office of Governor. They demanded an apology from the MLA and also the Chief Minister.

He alleged that this is not the first time that the government has done this, adding that when she wanted to hold a meeting with the Chief Secretary to take stock of Covid situation, the Chief Minister prevented officials from attending.

He said that the Governor’s statement vindicates what the BJP has been contending since April this year that the government has been “criminally apathetic” towards taking measures for preventing the spread of Covid.

BJP spokesman K. Krishna Sagar Rao termed the MLA’s comments as “irresponsible” and “disrespectful” to the constitutional head of the state.

Asked about the Governor’s comments, Union Minister of State for Home, G. Kishan Reddy said at a news conference on Sunday that she made the observations in her personal capacity and denied that this has anything to do with the Centre or the BJP.

The minister also stated that the Governor, herself being a doctor, was advising the government on how to handle the situation. #KhabarLive #hydnews