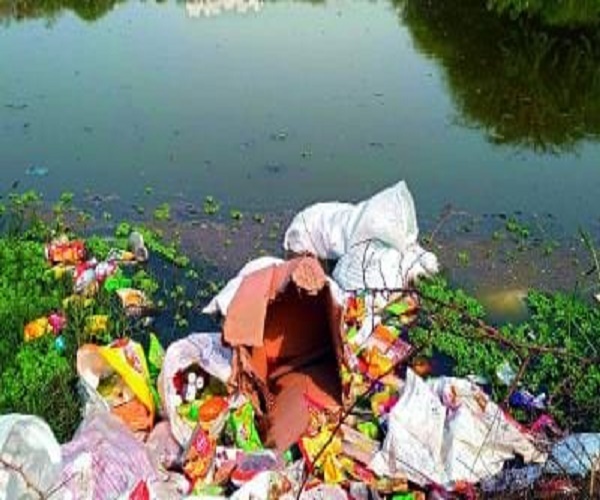 Loads of expired biscuits, chocolates and other products were found dumped at Neknampur lake. The carton in which these products were dumped mentioned the name of Heritage Fresh Hyderabad and was reportedly transported from the supermarket’s Alkapur branch.

Earlier, an ice cream company, Creambell, had dumped its products into the same lake. Eyewitness Ms Madhulika Chowdary said, “The products found dumped now seem like year-end products. We do not know who exactly dumped the things.”

Officers at Heritage Fresh’s Alkapur branch confirmed expired products had been disposed of. But, they said, the load was handed over to the municipality.

Disposing of expired products in an unscientific manner is nothing new. Earlier, truckloads of outdated food were found thrown into the Kapra lake, Sainikpuri and also in community dumping bins. Certain supermarkets follow no specific procedure while discarding outdated goods. In fact, a majority of them just hand those over to the GHMC and the stuff then lands up in a dumping yard.

Some supermarkets do dispose of expired products by tearing off their cover and dumping them in garbage bins. For liquid items, bottles are emptied and then dumped. No supermarket has as yet been fined or raided to check for expired goods despite illegal dumping of outdated products. Environmentalist Ms Sagarika Rao said, “It is illegal to dump protein-based food past expiration in municipal dumpsters (skips) or bins. Protein (meat, eggs, dairy) must be disposed of safely and ethically.

The waste should be divided into returnable and non-returnable section. Non-returnable waste should further be divided into wet and dry waste. Returnable waste, mostly called returns, is sent back to the supplier for credit. The supplier will then either rework the product, resell or dispose it. Reworked products include processed cheese. Wet waste, usually perishable produce, if fit for human consumption, is donated to food banks or charities. If not, it’s disposed of to disposal companies or donated as animal feed.”

Unlike in the US, India doesn’t have stringent enforcement agencies that are strict about illegal disposal of expired goods. #KhabarLive