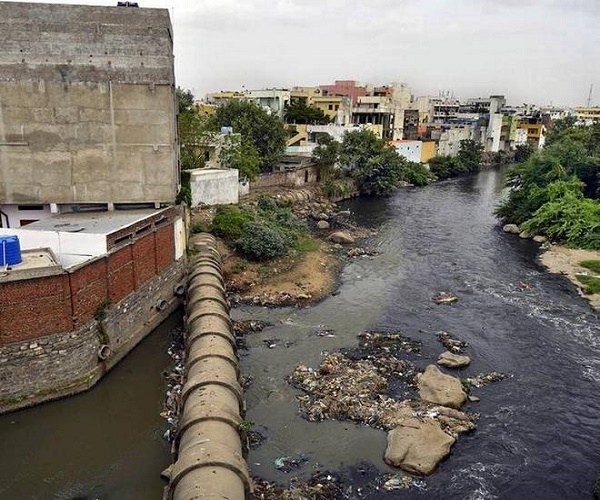 Construction activities go unchecked on river bed, banks. Commuters on the Metro travelling towards Malakpet see a narrow dark water channel with white froth passing under the train on one side and rows of massive concrete columns on the other side. The dark frothing slurry happens to be the historic Musi river as it passes through the city of Hyderabad. “During monsoon rains, the river water rises to this wall. It happens at least once or twice in a year.

Luckily, it hasn’t rained much in the past two years. God knows what will happen if it rains,” says Akbar who washes clothes on one side of the river. As the Metro thunders overhead every few minutes, life goes on in the river bed where there are multiple places of worship. In one part of the river bed is the Greater Hyderabad Municipal Corporation transfer station where garbage from southern parts of the city is collected and is sent onwards for processing.

In June 2017, the Musi River Development Corporation was created as a special purpose vehicle which would oversee and execute the clean-up of the river. On Wednesday, not a single official was available at MRDC’s Tarnaka office for sharing ideas about the progress of the project. “All the officers have gone for a meeting. Earlier the office was in Saifabad. Now they have shifted here. But not much work happens here,” said an attender at the office. It is not that officials are in the dark about the rampant dumping and construction activity on the river bed.

“Illegal construction of structure opposite Victory playground encroaching on government land on Musi river bed and footpath on very busy but narrow Putli Bowli road. Are GHMC, POLICE sleeping or have been bribed off?” one Twitter user posted a few months back with photographs of the construction and tagged almost all the top officials of the State. Nothing much has changed as the construction activity is still going on.

The construction activity is not limited to one part of the river but is going on the length and breadth of the Musi. “I dread to think what will happen when there is a big rain. All these pillars will be in the path of the river. Where the water will flow nobody knows,” says Anuradha Reddy, of Indian National Trust for Art and Cultural Heritage, who blames previous regimes in the State for the destruction of the river.

“Imlibun was a sandy island in the middle of the river with a lot of tamarind trees and a family burial ground. Then they built the bus stand by dumping tonnes of concrete, and the path of the river changed,” says Ms. Reddy. A little later, officials built a 10-feet wide stone channel to work as a storm drain.

Satellite images show the dramatic impact of how the river has shrunk as the island has expanded due to human intervention. The first signs of pillars being built into the river bed are from 2016. The newest satellite image shows a high density of pillars in all directions on the river bed. All these development are at a curve in the river. How a heavy downpour will impact the area and the city remains to be seen. #KhabarLive