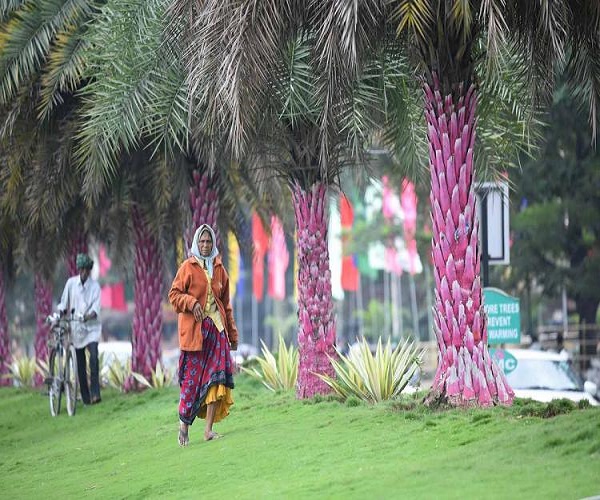 Despite the Telangana government’s strict instructions not to lay off employees, it has sacked over 100 low-grade outsourced employees working in the Horticulture department.

Kashamma is in distress. On a regular day, she would wake up at 4 am, cook meals for her three children, leave home by 6 am and reach the residence of a High Court judge located in Kundanbagh in Hyderabad’s Begumpet by 7.30 am. She maintained the garden at the judge’s residence, a job she held for 10 years.

A single mother, Kashamma says her children ate meals in her absence as she is the breadwinner of the family. Earlier this week, she was asked not to report for duty from May 1, leaving the future of her entire family uncertain.

Kashamma is one of the 120-plus workers outsourced by the Telangana government’s Horticulture Department to work in various government buildings and at the houses of senior officials. They have all been asked not to report for duty from May 1 due to a lack of funds.

The workers who were removed include gardeners, personal security guards, watchmen, and other lower grade workers. These employees got a monthly income of Rs.12,000, of which about Rs 10,250 is what they received in hand.

On April 17, the Department of Horticulture removed 61 gardeners, watchmen and security guards were informed that they were removed from duty from April 15 itself. 99 other outsourced employees of the same category were also told not to report to duty from May 1.

In the letter ordering the termination of these services, the government stated: “It is informed that due to coronavirus disease, the government is facing a financial crisis and has to earmark more budget to prevent the pandemic.”

These are the gardeners who have decorated the parade grounds on every Republic Day, Golconda fort on every Independence Day, and Bapu Ghat on Gandhi Jayanti. Every festival celebrated by the state government (be it Bathukamma, Christmas or Ramzan), when the airport has to be decorated for VVIP visits, or bungalows of judges and ministers have to be decorated decoration of bungalows of judges and ministers, it is these gardeners who are roped in to make their gardens look presentable.

“How do we survive amidst this lockdown period if they suddenly say that we are out of a job? This job is the only source of income for many of us and my co-workers are crying thinking about their future. We won’t even be hired anywhere as domestic help due to the lockdown,” laments Kashamma.

Ironically, these workers have been laid off at a time when the state government has asked companies not to terminate the employment of any employee, whether they are on contract, outsourced, or are regular employees.

On behalf of Telangana Government, Minister @KTRTRS appealed to IT and Industry heads to ensure that no employee – regular, contract or outsourced, lose their job during this crisis. pic.twitter.com/N4E8iDVEpm

G Surender, another gardener who was let go, is a father of four girls. “I made sure that all of them get an education. They are all studying now. How am I supposed to continue their education now? I’m deeply in debt already as my wife had to undergo a kidney removal operation,” he says.

“I feel like everything is futile now. Despite the lockdown, we were told to make it work. As there were no buses, I was cycling 32 km up and down from Shamshabad to do gardening work in the city. They have suddenly asked us not to come to work, taking away our only source of income,” he says. Surender has been a gardener for nine years.

Most of these workers belong to lower castes and don’t have any other source of income.

“I belong to the Madiga community (categorized as Scheduled Castes). It’s not just me. Most people who were working as gardeners or otherwise are also from lower castes and they don’t have any other source of income. We don’t even have land to sell,” Surender adds.

Balu, one of the gardeners at the Nampally Public Gardens said that they appealed to Minister K Taraka Rama Rao through social media as well as to Finance Minister T Harish Rao, but have not received any response yet.

He adds that they are dependent on the department for work, and do not have any more employment opportunities as they have been doing this job for a very long time.

Joint Commissioner, Labour Department, E Ganghadar told #KhabarLive. “However, we cannot do anything by overriding an order which is from another government department,” he said. #KhabarLive