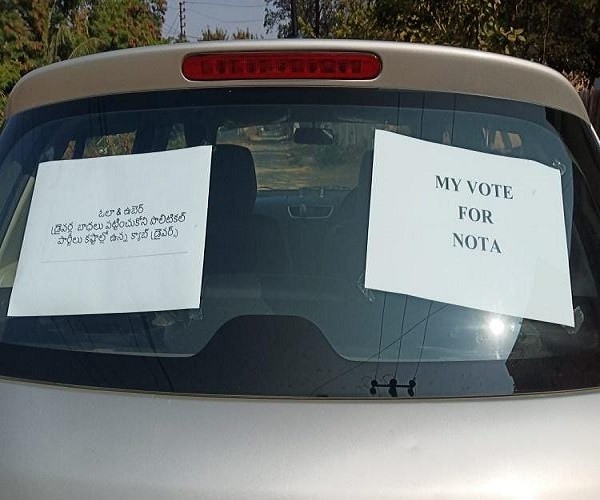 Around 400 cabs in Hyderabad were seen sporting posters with the words ‘‘Vote for NOTA” on their windshields. Ahead of the elections in Telangana, cab drivers employed by online cab-hailing service providers in the city have decided to promote ‘NOTA’ as a voting option, stating that the government has failed to resolve the issues pertaining to the cab-hailing services.

Ola and Uber drivers have claimed that their repeated demands for a regulation of the app-based aggregators have allegedly been ignored by the government. Speaking to #KhabarLive, Shaik Salauddin, president of the Telangana Four Wheeler’s Drivers Association, said that the association’s major demand is to increase the per km fee for drivers from Rs 11-12 per km to Rs 17 per km.

“When Ola and Uber initially came to the city, they harped on giving huge profits to cab drivers. But drivers today rarely are able to make any profit. Two years ago, a government-appointed committee had decided to hike charges for drivers from Rs 11-12 per km to Rs 17 per km, especially for taxis that run to the airport.

But due to lack of proper regulation, the aggregators continue to make huge profits, while we are paid a meagre sum of Rs 11-12 per km. Our pleas are not being heard as neither the government nor any other political party wants to upset cab aggregators in the state. Maybe the political parties do not consider us as a potential vote bank and hence we have decided to vote for NOTA,” Salauddin says.

The cab drivers association had surrounded the assembly with cars in November last year as a mark of protest after the government had failed to resolve their issues. Some of the drivers were even sent to prison for a few days.

Another major demand that the association has put forward is to ensure KYC approval of customers to tackle assault on drivers.

“There have been a lot of incidents where drivers have been taken to remote areas, robbed and assaulted. So just like how the customers have access to our data, we also should be able to provide information about customers especially in the aftermath of such incidents,” Salauddin says.

The association’s other demands include ensuring business guarantee for all drivers, to establish a welfare board for drivers, enforcement of labour laws and to put a cap on the number of new cars that can be attached to aggregator marketplaces.

“Not just a welfare board, we also want the aggregators to take responsibility for the drivers’ safety and security while drivers are working on aggregator marketplaces with fundamental benefits such as PF and ESI being provided,” Salauddin adds.

The cab drivers have decided to intensify their protest as they say that neither the ruling party nor the opposition candidates have yet heeded to their demands. “Cab drivers constitute a population of nearly 1.5 lakh in the city and it is becoming increasingly difficult to sustain our families with such meagre amounts as salaries. We had promised our votes for any party that was ready to address our plight, but as no party has come forward now, we are determined to cast our vote for NOTA this time,” says Salauddin.

Earlier, Mukkawar Sunil, the president of Telangana Cabs Association, had announced that he will contest the elections from the Quthbullapur as an independent candidate and had promised to improve the lives of cab drivers in the state if he wins. He had also stated that he would launch his own app which would give the drivers their promised fare. However, his nomination was later rejected due to some discrepancies in the documents he submitted. #KhabarLive