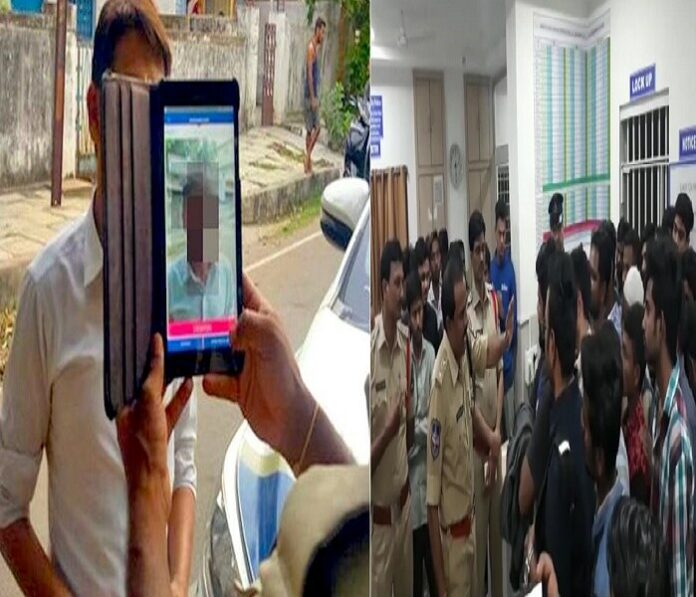 When a muslim youth, resident of Mallepally area in Hyderabad was heading to a bus stop at 5.30 am on October 11, when two policemen, armed with a fingerprint scanner and a tablet stopped him. The 21-year-old college student had never been stopped by the Hyderabad police before and was nervous as the police collected his Aadhaar, driver’s licence and other details along with his fingerprints and photograph.

“Is this something I should be worried about? I even said that I am a student,” the student posted on social media, asking ‘why he was targeted by the Hyderabad city police’.

The youth did ask the police why they were taking his details, “They said it’s just for safety and for catching offenders. I go every morning at that time but this is the first time I’ve encountered something like this,” he said. He has not told his parents yet about the incident. Later speaking to #KhabarLive, the 21-year-old wondered, “Will it be a problem if am applying for a passport? How do I get them to delete my information?”

What is Operation Chabutra? – At 10 pm on October 22, the Hyderabad West Zone police conducted Operation Chabutra, where 210 individuals were picked up from the streets under two police station limits. While the operation went on until 3 am the following day, these individuals were let off in less than 24 hours, to avoid them being produced before the court, as mandated by the law. Some of those apprehended had criminal records but a majority of those caught were bystanders.

The brainchild of a former DCP, Operation Chabutra, which means dais in Urdu, first began sometime in 2015 under the West Zone police limits, with the aim of reigning in teenagers roaming the streets at night. Their phone numbers and personal details would be collected and their parents would be informed. They would be let off after the police ‘counselled’ them.

Since 2015, the operation has been conducted three to four times annually, with no fixed pattern, said police officials, who added that it is carried out “when required”. While Operation Chabutra does take place across zones in Hyderabad, it is more routinely carried in the Old City that has a sizable Muslim population.

Police officials said Operation Chabutra is a means to preemptively stop crimes. Officials told #KhabarLive that the police are allowed to collect details such as a fingerprint and photograph of a citizen under the Prisoners Act 1920. The Act allows for the collection of fingerprints and photographs of convicted persons (those sentenced to upwards of one year’s rigorous imprisonment), non-convicted persons (those arrested in connection with an offence punishable with rigorous imprisonment for a term upwards of one year), and habitual offenders.

However, the Act is only applicable if an arrest has been recorded. If done otherwise, experts say that it would be illegal.

When the West Zone DCP, B Sumathi was asked about the legality of Operation Chabutra and the subsequent data collection, the officer said, “If they don’t agree to their fingerprint being taken, we don’t insist.”

But not everyone agrees with the police version. One Reddit user, who was picked up, said the constables were rude and did not explain to him why they wanted to profile him. “I went in hesitantly and was asked to give my fingerprints. I was adamant that I won’t do so unless they tell me why. They told me that it is a routine checkup to catch offenders. If my fingerprints turn up in their database I would be taken into custody. It was very unnerving though. It felt like I did something wrong. Add to the fact that those constables were rude with their questions,” wrote Reddit user ‘Baalaka’.

When quizzed about these experiences, the West Zone DCP replied,” The police have the right to question what the purpose of moving at that hour (late night) is. Once the police are satisfied they will be let off.”

However, Prashant Reddy, Senior Resident Fellow at Vidhi Centre for Legal Policy, pointed out that the police don’t have the legal powers to collect your fingerprints, nor do they have the right to take people off the streets. “The basic rule is that if you are collecting any kind of data and processing it there has to be a law in place, right now there is no law in place that allows the police to randomly take people off the streets and do all of this. Once they are arrested they can process fingerprints under the Prisoner’s Act 1920, but before recording arrest it is illegal,” said the lawyer, who further added, “If the police are doing something that is not prescribed in the law then it is illegal.”.

The Hyderabad police is of the view that preemptively stopping smaller petty crimes will prevent bigger crimes, the logic is based on the Broken Windows, a criminology theory by social scientists George Kelling and James Q Wilson. The duo argued that if a building window is broken and left unrepaired, the other unbroken windows will also eventually be broken.

The reasoning is that an unrepaired window is a sign of neglect, so no one will question the vandaliser for breaking the other windows, thus perpetuating a sense of breakdown in law and order. The theory was adopted and implemented in the 1980s and through the 1990s in New York. While some studies say it helped bring down the crime rate in the city, other studies suggest it was not the sole reason for drop in crime rate.

ALSO READ:  Why India, A Gaint In 'Vaccine Production' Losing Trust And Confidence?

Based on the theory, the NY police brought in community policing and also controversial methods such as the stop-question-and-frisk program that was eventually scrapped in 2017 by the US Supreme Court. Among the criticisms was that the Broken Windows theory gave rise to allegations that those from the marginalised African American and the Hispanic communities were being targeted more by the police.

From January to June 2019, the Hyderabad police has booked as many as 40,000 petty cases, according to the City Police Commissioner Anjani Kumar. In an interview he stated, “Booking small petty cases and ensuring conviction is a globally accepted step towards reducing the commission of grave and bigger offences. It has been tested everywhere including by the New York police when they applied the ‘Broken Windows’ theory’ in the early part of the century.”

Under Habeeb Nagar and Mangalghat police station limits where Operation Chabutra was conducted, the police has booked 3800 petty cases. Of the 3800 petty cases that were registered from January this year, 42 people had gone to jail.

In 2018, Hyderabad police launched an official app to track e-petty cases. While offences for petty cases only have fines attached to them, police officials said the e-petty case app helps officials build evidence against someone whom they consider a repeat offender.

DCP Sumathi said those involved in drunken brawls, creating a public nuisance such as causing excessive noise, keeping establishments open beyond a prescribed time despite repeated warnings get petty cases booked against them.

But that’s not all. The e-petty case app is integrated with the TSCOP app, which is the Telangana state police’s official real-time policing application.

As a result, she explained, officials are now able to establish a person’s link to someone with a criminal history. The TSCOP app, Sumathi said, gives the police “360 degree” profiling of a person with a criminal record through interconnected databases, even their social media presence is noted.

On the night the West Zone police picked up 210 persons from Habeeb Nagar and Mangalghat police station limits, they also picked up 35 persons designated as history sheeters. Another 23 persons had cases of running scams, property offenders, robbery, dacoity and snatching. The police were not forthcoming about the 152 persons who had no previous criminal records but would now have their profiles stored in the TSCOP app.

According to the Telangana DGP M Mahender Reddy, the TSCOP app provides critical information anytime, anywhere to police officers through their smartphones and tablets, especially if they are on the field. Launched in 2018, the app now supports facial recognition and geotagging of the residence of a person with a criminal record.

“The objective of doing Operation Chabutra is to rein in the rowdy sheeters or history sheeters of the particular police station who are very active,” explained Sumathi who added that those with a record picked up through Operation Chabutra are to explain to those without a criminal record as to how they got influenced into committing serious criminal offences. She added that speaking about their criminal past to the crowd would prevent the criminal from relapsing.

All 210 persons who were caught that night were shown videos prepared by the Telangana Police to instil the fear of committing a crime, “We showed them videos of the Telangana police showing them how the policing has become smart where if they do a small illegal activity or even if they get associated with someone who is not appropriate, their database is built up,” she stated.

Calling the actions of the Telangana police an invasion of a citizen’s privacy and a violation of established criminal procedures, Srinivas Kodali, an independent researcher on Open Data said, “During the Chabutra and Cordon and Search operations, the police are not just coming to your house to collect your biometric, they are barging into the house and doing it late in the night. This is what happens in Kashmir. If what is happening in Kashmir is considered a Human Rights Violation (HRV) how are these actions of the Hyderabad police not a violation?”

Srinivas was referring to Hyderabad police’s Operation Cordon, where an area is cordoned off and searched for weapons and insurgents. This operation like Operation Chabutra is also now being conducted across Telangana with varying frequency.

“These operations target low-income neighbourhoods, as these are the people who least resist. They are putting people under surveillance. Where is the law for it, how do we know they are not using this for political use?” argued Srinivas who pointed to the various instances where opposition leaders in Telangana have accused the TRS government of phone-tapping and using the state police to keep tabs on them.

“As there is no law, there are no safeguards. The police can do as they please. Worldwide, different city governments and authorities are banning the use of facial recognition and other controversial technologies and here in Telangana we are experimenting on marginalised communities illegally even after a grand progressive right to privacy judgement in India,” he alleged.

The Hyderabad City Police Commissioner was unavailable for comment on why the police are collecting data of those without a criminal record. #KhabarLive