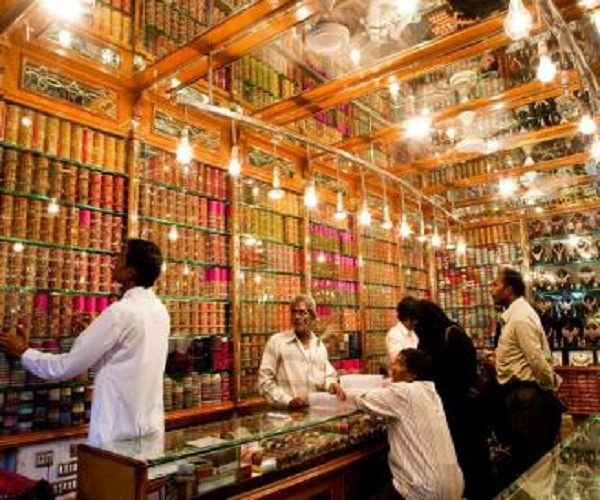 With glimmering lights, and the clink of bangles all around, the bustling city of Hyderabad comes alive in Charminar’s Chudi Bazaar. Here politics, elections makes no difference who ever it is, they mind only the person who works for them or the leader who is in public talk.

According to Mohammed Asif, a bangle stand owner, KCR deserves a second chance because of the various welfare schemes he has initiated for the people.

The Chudi bazaar is considered one of the largest markets in India and sees at least four thousand tourists every day. While shop owners claim that the election season has reduced their business by 50 percent, they have seen better days.

“For every festival, it becomes necessary to come here to buy bangles. Even if someone comes to Hyderabad they get calls from home saying ‘Bhai, buy bangles and come, or don’t come.’” – Jaffer, Shopkeeper

The bustling market has a different face. While it is solely dependent on women for business, and scores of women are out on the streets buying bangles, the entire market does not have any woman shopkeeper. Notably, the shops also do not employ women.

And when questioned about this peculiarity, some say that those who make these bangles are women (behind the screens, in the confines of their homes), but most others turn rather defiant.

“No, no. Women don’t sell bangles. Only men sell bangles. It is a lady’s product. But why will they sell it? Tell me? When I am doing business what is the need for women to do business? Women should stay at home.” – Syed Imran, Shopkeeper

“Men have been selling it for a long time. Everyone has a different opinion. Your thinking is yours. And our thinking ours.” – Mohammad Khadir Ahmed, Bangle Shop Owner

Beyond the glitz of the market and the echos of bangle clinks, is the worried faces of the sellers. From wanting a metro station in Charminar to wanting the barricade in the market area removed, their demands are aplenty.

“My main issue is that they said there will be development in one year. But there has been nothing. In the name of development. Charminar has become more dirty. There are so many tourists but the place is not proper. You can see for yourself how dirty it is.” – Mohammed Zameerduddin

He further adds: “Business has been dull for the last 6-8 months. People are not coming because all four sides of Charminar have been barricaded. The cars don’t come near the shop. Old women and men don’t come here.” #KhabarLive