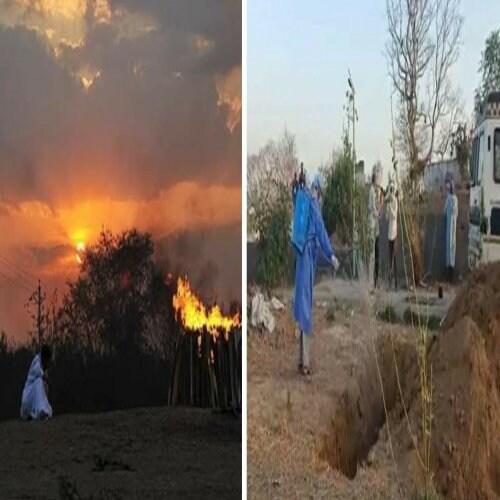 In a sad and shocking case, health workers in Hyderabad performed the funeral of a 74-year-old Khaja Hameeduddin, who became the first person in Telangana to die of the deadly coronavirus.

Soon after his death, blood samples were collected. He was tested positive with COVID-19 and his grieving family has been under quarantine at their resident in Khairiatabad in Hyderabad.

Because of this, no family members was able to attend the funeral of their loved one and the mortal remains was laid to rest in the presence of health workers.

According to a media reports, the man was buried on March 28.

There is empathy, but it’s very complicated – according to the guidelines for the 21-day nationwide lockdown, not more than 20 persons are allowed to gather at a funeral or congregation.

The health workers took necessary protective measures before and after the burial so as to reduced the potential transmission of the virus after the patient’s death.

Looking at the current stats, Telangana Health Minister Etela Rajendra said that 53 positive coronavirus cases were reported in the state.

The highly contagious virus has infected more than 1,000 people and killed 29 across the country.

Similarly, a 50-year-old Lakshmi, a resident of Miryalaguda curses her luck. Lakshmi couldn’t attend the funeral of a close relative, 60-year-old K Somaiah who died due to age-related illness in Thirumalagiri town. This is in the neighbouring Suryapet district, approximately 80 kms from Miryalaguda. Lakshmi’s family members say that she hasn’t been herself since the death.

Lakshmi has been blaming herself for not making it to the funeral. It is also guilt which is burdening Lakshmi. When Somaiah’s sons informed her about the death, Lakshmi had to make an excuse. “I didn’t know what to say… and had to lie that police are not giving permission to move out of the house,” Lakshmi says while breaking down.

“I was the first person they called to inform, but due to the lockdown I couldn’t go. I couldn’t see the face of the man who took good care of me after my father passed away, one last time.” Lakshmi’s father had died 20 years ago.

In Telangana, police are strictly implementing the lockdown, often with high handedness and extra judicial punishments. “Before even telling the reason, they are beating people, so how can we approach the police and convince them about our emergency?” Lakshmi’s daughter asks.

An unprecedented 21-day national lockdown has been imposed across India to combat the spread of the deadly coronavirus, which has claimed 29 lives so far across the country. In many places, leaving one’s home, except for emergencies, is considered a crime.

Similar stories are being reported across the country. Tulasamma, a native of Hoskote in Karnataka died on the same day as Somaiah. However, she was staying with her daughter Pooja in Ramasamudram, Chittoor, and breathed her last there. Due to the lockdown, none of her close relatives from Karnataka could attend her last rites. Only about 50 relatives within Ramasamudram could attend the funeral.

“I really wanted my elder cousin and her husband to be with me and to attend the funeral, but that couldn’t happen,” says Pooja as she tries to contain her emotions. Her cousins stay in Bengaluru. “Due to the fear of coronavirus spreading, police didn’t permit large crowds.”

In Kerala, a 30-year-old woman died last week. Talking about it, her cousin recalls, “It was all so unexpected and sudden that none of us even thought of the possibility that we won’t be seeing her initially. When it sunk in that we won’t be able to see her or each other, the tragedy hit us like a load of bricks.”

“The hardest part was all the stress about the funeral. Getting her body home required so much paperwork, calls and permissions.” Police allowed only 20 members to attend the funeral, and the family had to make the hard decision over whom to invite. “A lot of her closest friends could not make it. Sisters and cousins could not make it to the list. At a time like this when there is an unacceptable death of your loved one — it was a double blow to have to apologize to people for not including them in spite of knowing how dear they were to her.”

The cousin says, “Everyone who travelled to meet her needed to carry a copy of the death certificate. And then after the funeral, the sudden emptiness of the house which is usually taken care of by visiting relatives and friends was not possible too. The family and all of us had to rely on technology to hold each other up and handle everyone. Such a nightmare like this, made us realise that we do not have the luxury to fall sick or die at this juncture in time.”

COVID-19, the disease caused by the coronavirus, has been declared a pandemic by the World Health Organization, and along with India several countries like Russia, South Africa, China, New Zealand, Saudi Arabia, Colombia, United Kingdom, and Australia have imposed a lockdown to slow down the spread of the disease. Due to the lockdown, which includes a ban on international flights, bodies of Non Resident Indians who died also cannot be flown down to India.

Speaking to #KhabarLive, a Gulf-based native of Kerala says, “We have a large Malayalee community here and whenever a death happens, we almost always transport the mortal remains to Kerala and hold the funeral and cremation there. However, with the ban on international flights to India, this too stopped. A family friend had passed away last week and they had already booked their flights to Cochin. However, a day after that, the flight ban was imposed. Following this the body was cremated here.”

The nation-wide lockdown was imposed on March 25 and is to be in place until April 14. On Monday, after speculations of the curfew being extended made rounds, the Cabinet Secretary of India, Rajiv Gauba, said that there was no plan to extend the lockdown. #KhabarLive