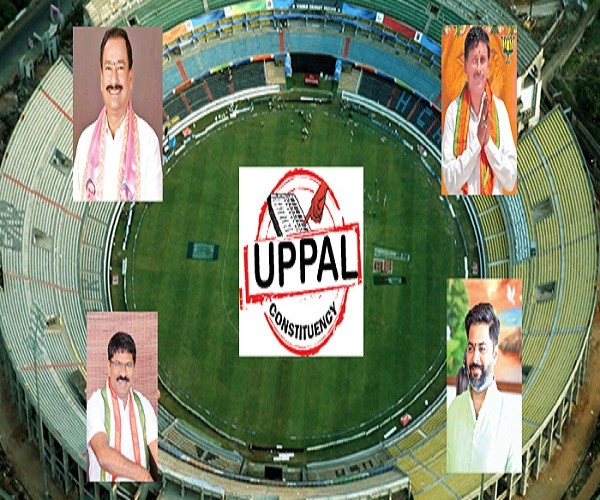 It is a case of so near, yet so far. With the permutations and combinations in the Grand Alliance still in the making, the leaders of the parties within the ‘Mahakutami’ have in their own capacities started to campaign. What is intriguing is that each one is confident of getting a ticket.

There are no permanent friends or foes in politics, so goes the saying. Take for instance the case of Congress Uppal constituency in-charge Bandari Lakshma Reddy, who recently joined TRS with much fanfare, in the presence of the pink party chief KCR at Telangana Bhavan.

Some of the corporators in the constituency, who were considered as backbone to the party at division level, like Shanthi from Nacharam along with her husband Shekar, who served as Greater Hyderabad Congress general secretary switched their loyalty. Incidentally Lakshma Reddy’s father Raji Reddy created a record of becoming first legislator of the nine-year-old constituency. According to party sources, Lakshma Reddy lost hopes of getting party ticket after getting defeated in the hands of TDP-backed BJP candidate NVSS Prabhakar, in 2014 elections.

He also feared stiff competition from youth leader of TDP Tulla Veerender Goud, son of former Home Minister Devender Goud. The sources revealed that to avoid embarrassment in the constituency, the grand-old party immediately appointed Ragidi Lakshmi Reddy as Uppal in-charge, who seems to be busy with various social activities under the banner of a trust named after him. After his appointment, Ragidi started criticising Bandari for his opportunistic politics and making known his ambition of getting the ticket.

According to political analysts, Tulla Veerender Goud who took advantage of the prevailing situation in the Congress, started poll campaign on his own projecting himself as TDP candidate, certain to be backed by the GA. Heavily banking on his father’s legacy, Veerender Goud intensified his door-to-door campaign and started interacting with people in colonies.

So far, his approach has been limited to campaigns where the development took place in TDP rule. At present Veerender Goud is concentrating on Kapra and Nacharam areas. According to Congress sources, sensing trouble from Veerender Goud in getting the ticket, party constituency in-charge Ragidi recently launched his poll campaign in front of Mahatma Gandhi statue at Uppal.

He categorically rejected the rumours about the GA move to allot ticket to Veerender Goud. Ragidi projecting himself as Congress candidate, made very little mention of GA in the poll campaign. He started door-to-door campaign in the colonies and claimed that the party has hold in the constituency.

TRS candidate Bethi Subhash Reddy intensified his poll campaign with early announcement of his candidature by party high-command. According to party sources, he is mainly banking on development programmes and welfare schemes introduced under TRS rule.

But some of the corporators and leaders who fought for Telangana have been opposing his candidature on various grounds. They openly conducted protest rallies and meetings. According to political analysts, the party high-command is adopting a wait-and-watch policy in settling internal issues in the constituency. But, irrespective of opposition for his candidature, Subhash Reddy continued with his campaign with the support from recently joined Bandari Lakshma Reddy.

As far as BJP was concerned, with the early dissolution of the State Assembly, sitting legislator NVSS Prabhakar claims that he contributed more to the development of Uppal compared to his predecessor, secured HUDCO funds in crores and succeeded in getting Uppal Elevated Corridor. Prabhakar exuded confidence in his victory in December elections. According to party sources, the moment high command announces his candidature, he will start his poll campaign. #KhabarLive