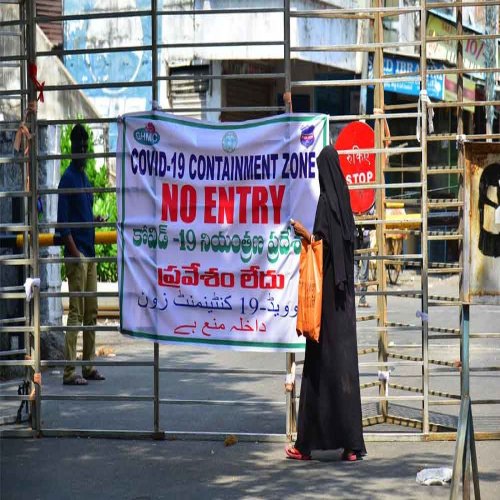 The surge in Covid positive cases is touching the danger level of pandemic in Greater Hyderabad Municipal Corporation limits in Telangana. According to official data Amberpet circle area tops the chart. And no preventive measures are taken to combat the situation.

The Amberpet circle within the Greater Hyderabad Municipal Corporation (GHMC) limits seems to have recorded the highest number of positive cases since March, closely followed by the Goshamahal circle. A brief analysis of the data from March uploaded by the GHMC shows that Amberpet circle has recorded 1,747 cases, the highest within GHMC limits closely followed by the Goshamahal circle with 1,413 cases.

It was on Monday that the GHMC upon orders from the Telangana High Court in June began uploading the patient ID, ward, circle and zone details on their website. The data, as per the court’s orders, is also to be shared with Residential Welfare Associations (RWAs) and on the front page of vernacular dailies.

However, conversations with GHMC officials suggest that the data, being uploaded as per instructions of the Telangana High Court, may not be accurate.

The officer also suggested that the numbers shown on the GHMC website may be overlapping and in some case patients may not have been recorded. “There are many cases that are overlapping and hence got counted twice and in several instances, people were issued double patient IDs. We are also getting details of patients who visit private hospitals late and those details get updated later or may not get updated if we don’t have to get the details,” she said.

The officer also added that in the past several weeks instances have risen where officials were unable to trace COVID-19 positive patients, “There are some 277 persons who we were unable to trace, they give wrong details while getting tested, they will receive the test status saying they are positive but then won’t pick up the calls,” the doctor added. In such instances, the officials will only have the patient ID. The ward, circle and zone details will be falsified.

The GHMC corporator for Amberpet Jagan Pili affiliated with the ruling Telangana Rashtra Samithi (TRS) also told #KhabarLive that the numbers shown on the GHMC website are inflated, “The numbers are not accurate, it shows over 1,700 cases since the start of the pandemic, the real number is 1,450, this is Thursday’s total. The cases are high in this locality because of the police quarters. A lot of police officers and their families tested positive at the Police Lines where the police stay with their families and at the police academy,” said the corporator who added that they have been undertaking sanitization drives. “This is a predominantly slum area and so we have to be careful,” he added. #KhabarLive #hydnews