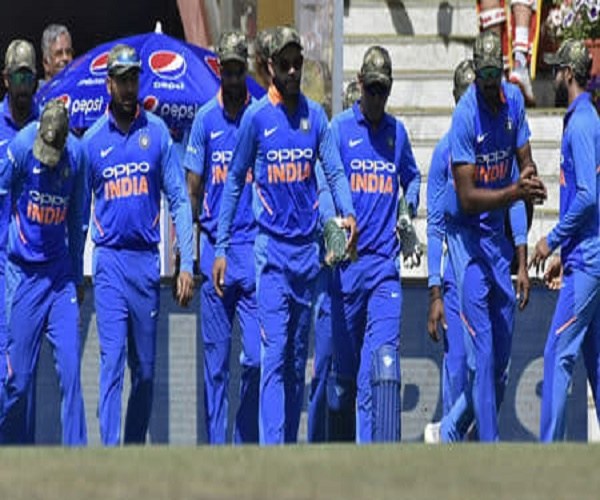 While Virat Kohli proudly announced that the team was wearing the caps to signal support for Indian soldiers, never before has the team worn jingoistic symbols so overtly.

When the Indian cricket team took to the field for its third ODI against Australia in Ranchi on Friday, they wore military caps as a sign of solidarity with the 40 troopers of the Central Reserve Police Force (CRPF) killed in Kashmir’s Pulwama last month. This is dangerous terrain for the national cricket team to tread, whether knowingly or not.

Firstly, it was not necessary to wear camouflage caps to publicise the cricketers’ acts of charity, as the players contributing a day’s salary to the family of the dead soldiers could have just made an announcement to that effect. Charity does not necessitate the display of outward military jingoism, as signified by donning a military cap. Never before has the Indian cricket team worn such jingoism on their heads, notwithstanding the patriotism they wear on their sleeves.

Also, even though the team has contributed to other causes and players like Sachin Tendulkar and others have made private contributions or adopted villages, such acts of charity were not made under the cover of creeping militarism or ultra-nationalism, like it has been done now.

No team in the history of modern cricket has worn military camouflage caps or symbols during an international match to make a statement.

There can be little doubt that the team has been nudged towards this display of jingoism by the prevailing anti-Pakistan sentiment, as well as the heated political scenario due to the approaching elections. No team in the history of modern cricket has worn military camouflage caps or symbols during an international match to make a statement.

Captain Virat Kohli proudly announced after the toss that the team was wearing the caps to signal support for Indian soldiers. The idea to sport the caps came from former captain Mahendra Singh Dhoni, who is an honorary lieutenant colonel with the Indian Army.

Mind you, Kohli is so superstitious about the cap that, like some other players before him, he normally sports the same dirty Test cap that he wore on his debut. But wearing the military cap seems to have come quite easily to him. Also, the team hasn’t so far thought about giving their hard-earned money for education or some such collective causes.

An act like this cannot fail to have a fallout. In an act of nationalistic fervour, the BCCI has decided to try and keep Pakistan out of the World Cup, even without any prodding from the government. In case it fails, and Pakistan wears its own military caps during the World Cup, will the Indian team walk of the tournament? In such a case, can Pakistan be accused of conducting a provocative act, since India showed the way? Also, ICC rules do not permit wearing of caps other than national caps.

ALSO READ:  From Bowl To Ballot: At Telangana’s Food Festivals, The Latest Flavour Is #ElectionPolitics

Nationalism and sport are closely linked for sure—that is why jerseys often sport national colours and medal winners wrap themselves in national flags. Indian nationalism, too, has been closely aligned with sport for a long time. Ronojoy Sen has written in his book Nation At Play: A History Of Sport In India that Motilal Nehru once took a team of wrestlers to Europe.

Teams often observe silence over national tragedies or wear black bands, in keeping with accepted practise. Not so military caps, which symbolise aggression. To cap it all, Sunil Gavaskar was seen distributing the caps to commentators including a thoroughly embarrassed Matthew Hayden who was not obliged to wear it at all.

“There is no evidence in contemporary sources to show any direct linkages between the Congress and the athletes’ decision to not salute Hitler in Berlin. But the fact remains that it was a political act breathtaking in its audacity, in direct opposition to most other contingents at the Games, including the British,” write Boria Majumdar and Nalin Mehta in their monumental Olympics: The India Story.

Ironically enough, Majumdar was among the first to tweet congratulatory messages to the BCCI for making the team wear military caps, showing how even writers and journalists are getting wrapped up in the militaristic fervour taking over political and national debates.

Even discounting for such snippets from history, the military-cap wearing is only symbolic of the larger narrative taking over politics. It would have been ideal for the team to wear a symbol supporting women on Women’s Day. But who is to remember the state of women in India when the atmosphere is rippling with jingoism?

How can the BCCI perform a symbolic act for women when its CEO himself has been accused (and pardoned by BCCI) of sexual abuse? The only gesture it made was to have BCCI administrator Diana Edulji (who opposed the reappointment of the CEO) at the toss.

BCCI has opened up the cricket field for overt political statements at a time when both elections and the World Cup are around the corner. Majumdar himself once quoted a journalist to point to the danger of bringing together “previously separated realms”, while talking about the role of the TV serial Ramayan in creating a “setting for a Hindutva revival” . With this act, the BCCI has brought together the separate realms of militarism and cricket. For this, Indian cricket and sport will pay a heavy price in the near future#KhabarLive .