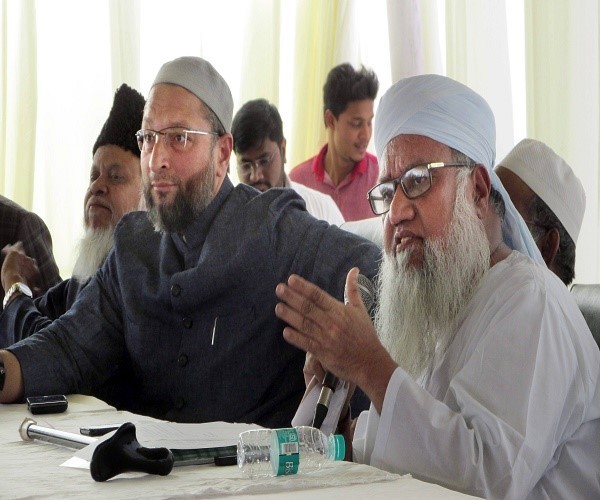 Political opportunism requires a consolidated community, living in perpetual fear. On April 15, the All India Muslim Personal Law Board (AIMPLB) and the Imarat Shariah will hold a ‘Deen Bachao, Desh Bachao’ conference in Patna’s Gandhi Maidan. This is a clarion call to save Islam. Quite misleadingly, a political ‘rally’ is being called a ‘conference’. In Jaipur, Malegaon, Godda, Darbhanga and various other places, such mobilisations have already been done.

Sumanta Banerjee, a Left historian, in a recent interview to Scroll.in said, “When we raise questions about Hindu fundamentalism, we need to do the same regarding Islamic fundamentalism. There are reformist movements among the Muslims, but, sorry to say, the Congress compromised with the mullacracy.”

This move of the clergy, therefore, needs to be resisted strongly – by not just Muslims but also by all those political parties which stand for secularism, as well as by all civil rights groups.

In 1986, having denied maintenance to 70-year-old Shah Bano (1916-92), bodies akin to the AIMPLB never looked back to find out ways of taking care of such deserted, divorced women. Since the board argued that the state cannot interfere, it became absolutely incumbent upon the board to build an endowment, or a similar welfare mechanism, to take care of such women. For three decades between 1986 and 2017, the clergy did not feel any such moral responsibility.

Unlike in the Shah Bano case, this time, in the Shayara Bano case, the AIMPLB was a respondent in the Supreme Court. It took a stand that “it was not for the judiciary to decide matters of religious practices such as talaq-e-biddat, but for the legislature to make any law on the same”.

On August 22, the apex court set aside talaq-e-biddat (instant triple talaq) as unconstitutional, which the board sheepishly welcomed. Since the AIMPLB had taken a stand that such issues had to be resolved through legislation, they should have issued a draft Bill for public debate – which they failed to do.

For nearly four months, between August 22 and December 15, when the Bill was proposed in the Lok Sabha, the board did not organise any awareness campaigns or mass mobilisation. When the Bill criminalising talaq-e-biddat was proposed, these forces suddenly became hyperactive. Even now, a highly uninformed, in fact misleading, emotive mobilisation is underway.

Rather than publicising the lacunae of intents and implications – whatever they see in it – in the proposed Bill, and rather than coming out unambiguously against the un-Quranic talaq-e-biddat, they are defending and safeguarding it shamelessly.

The proposed Bill provides for “matters such as subsistence allowance from the husband for the livelihood and daily supporting needs of the wife… and of the dependent children”. The board, while rejecting this Bill, is not proposing how to address these pertinent issues.

Here it needs to be added that under the old provision about ‘vagrants’ in the 1898 code, courts had time and again held Muslims to be liable for their pauper wives/ex-wives who were abandoned or divorced for the simple reason that the provision in question was one of criminal and not civil law.

This was reiterated in the 1974 Code of Criminal Procedure as well. The Muslim leadership may have been justified in 1986 had they led a protest against disparaging, sweeping remarks (in the judgement) about the obscurantist Muslim law without questioning the relief given to Shah Bano and other similarly situated women, which basically reiterated the position that held the field at least since 1898.

Quite importantly, talaq-e-biddat is prohibited in many Muslim-majority countries as well, and most of the Muslim sects disapprove of it. Yet, this regressive practice is sought to be perpetuated by the clergy. This is certainly a serious assault against the cause of secularism. Something they inflicted in 1986 as well, with a cry of Islam being in danger, and the secular parties were complicit in it.

A closer look at the political history of the Indian republic clearly suggests that every political formation and its leadership need frightened Muslims.

The political formations, pursuing politics in the name of secularism, secured Muslim votes en bloc by frightening them with communal violence. Providing protection from such violence was demonstrated to be a special favour to the religious minorities. This went almost without any judicial trial against the rioters, politicians and the partisan police officers.

In the post-Congress era, the single caste/dynasty-based regional formations did the same. Muslims were not allowed to concern themselves beyond protection from communal violence. To sustain and perpetuate this politics, the Muslim leadership counselled its constituency to remain concerned solely to the religio-cultural and emotive issues, through which, regressive patriarchy also perpetuated.

In the name of plural-secularism, the kind of politics that was pursued, over a period of time, revealed to many that it was basically a favour to Muslim conservatism and communalism – a politics of minorityism, rather than of secularism per se. This is how, significant sections of Hindus have been made to loathe the very idea of Indian secularism. This partly explains why and how the BJP and its affiliates have now become a hegemonic political force.

Backed with state power, the Hindutva rabble rousers now openly lynch Muslims, and then mocking at every rule of law, they video it, circulate it, and even then the lower judiciary, in certain cases, lets off the perpetrators. This demonstrative lynching and other victimisation is also a kind of statement, throwing a challenge to the political formations thriving on Muslim votes, by saying, “Look! This is what we are doing to your consistently loyal voters, and if you have the political guts then come out to act and save your support base”.

Silence and inaction, not even tokenism of statements, are the responses of most of such political parties and leaders, these days. Gone are the days of politics of minorityism, as Muslims are now being projected to be an electoral liability. The party talking of Muslims stands to lose Hindu votes.

In such a dismal scenario, when even these ‘secular’ political formations are looking the other way (could be termed as, wilful failure of the secular parties), and of the state machineries, there arises (Asaduddin) Owaisi kind of politics, trying to spread beyond a pocket of Hyderabad, to parts of Uttar Pradesh, Bihar, Maharashtra, etc. With his training in law from the West, the All India Majlis-e-Ittehadul Muslimeen leader articulates the grievances of minorities, cleverly couched in constitutional language. This is at a time when the hegemonic political force, armed with state power, disdains all such provisions of the Constitution as an undue favour to the minorities (what they call appeasement), and as victimisation of the majority.

But the Owaisi brand of politics, too, ironically, thrives on fearful minorities. How does he articulate his politics? That Muslim issues cannot be addressed by any such party, howsoever pretending to be secular, implying that a ‘Muslim’ party alone can take care of Muslim concerns. Since Owaisi kind of politics also needs a scared minority, he, too would align with all the regressive forces and tendencies within the community, just as the Congress and the post-Congress regional forces did, and Owaisi did it a few weeks ago by hijacking the AIMPLB. He, therefore, refuses to raise the issue of gender and caste-based justices.

Pushing politics beyond the logic of mere protection, and thereby raising the issues of gender and various layers of social justice, will require more complex skills of management and mobilisation. This will also require broad-basing and democratisation of the political party he runs as his personal fiefdom. Why should Owaisi then shun the convenience of opaque deals with a handful of representatives and demagogues! Recall the recent expose of such a deal by Salman Nadvi, a cleric on the executive of the MPLB.

Thus, mere hospitality to the MPLB has fetched Owaisi too many supporters across the country to the extent that thousands and lakhs of Muslim women are out on streets demanding the perpetuation of their own subjugation. On the command of the clergy, now supported by Owaisi, the un-Quranic, instant triple divorce (talaq-e-biddat), is being demanded by them to be safeguarded in the name of Shariat, which was enacted only in 1937, but is being paraded as divine. Something which most Muslim majority countries have done away with! The West-educated barrister is shamelessly championing this regression. Just as many modern-educated liberal Muslims in 1986 either sided with the Congress or kept mum on the regressiveness that was demonstrated in case of the legislation against the pyrrhic judicial victory of Shah Bano.

Cynical exploitation of the idea of secularism and the wilful failure of secular parties in the past decades has eventually shifted the Indian polity Rightward. Credit: PTI

Owaisi’s crafty silence on the unscrupulous underhand deal made by Nadvi in itself testifies something significant about his politics. Notably, no big rally by the clergy or by Owaisi has been organised against lynching. They won’t ever bring out such big rallies on the issues of artisans, farm distress, education, healthcare, employment, etc.

The saffron forces would then tell their constituency: “Look here, despite our hegemony, these Muslims are not prepared to be stationed in their place; that they are still craving for political power as equal citizens, rather than being contented to live with whatever little we would be offering to them”. The BJP gets yet another testimony to convince its constituency that the majority is in perpetual threat of the minority. Thus, an Owaisi is too useful for the BJP. Both fatten each other; each derives sustenance from the other.

Yet, the liberal-pluralists across the communities and groups seem to stay contented with one thing: failure of the incumbent Right Wing regime on agro-economic fronts will eventually bring back centrist forces to power. They may well be grossly mistaken with this smug understanding. Cynical exploitation of the idea of secularism during these many decades has eventually shifted the Indian polity Rightward. In the distant future, even if an election throws them out of power, their presence in the legislative houses would probably remain quite significant.

So, is there any way out? One of the ways is: both the Muslim liberals as well as the other liberal, progressive, Left voices shall have to admit their past follies. They should, therefore, launch a massive campaign against the misadventure of the extremely dangerous mass mobilisation of the MPLB to perpetuate misogynist practices like talaq-e-biddat. Quite clearly, pandering to or tolerating minority communalism/conservatism, cannot help them fight majority communalism. Will they wake up? Well, at the moment, this seems least likely. #KhabarLive