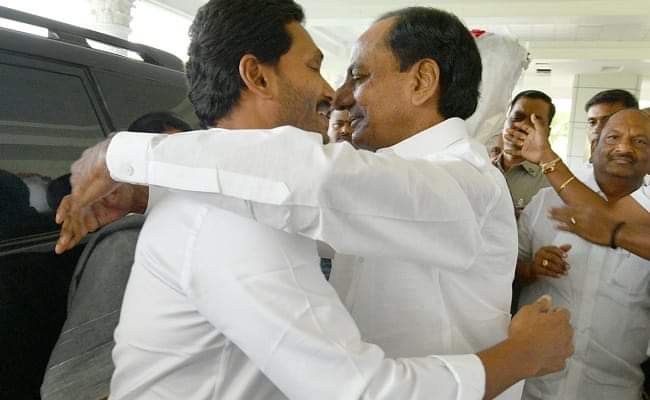 KCR and his entire family members waited at the portico even before Jagan arrived there to welcome him, which is unusual by any sorts.

No one should have any objection over Jagan meeting KCR to invite him to attend his swearing-in ceremony as CM-designate of neighbouring Telugu State.

But KCR is famous for ‘cunning politics’. He takes no time in ‘ditching’ others for his selfish political gains.

ALSO READ:  And, They Don’t Really Care About Us

If today, KCR extended grand welcome to Jagan at Pragathi Bhawan, it was only because of Jagan defeating his arch rival Chandrababu Naidu in Andhra Pradesh.

Thousands of crores of assets owned by common institutions in Hyderabad are yet to be bifurcated between Telangana and Andhra.

Can Jagan expect to get same welcome from KCR, if he demands AP’s share in assets in Hyderabad?

Can Jagan expect the same treatment from KCR, if he restores YSRCP in Telangana and starts contesting elections against TRS?

Anyone can easily say ‘no’ to these questions.

KCR is famous for ‘use and through policy’. He used Congress, BJP, TDP, TJAC, Telangana employees unions, civil organisations during Telangana statehood agitation and shunned them after he became CM.

Leave about political parties, he even adopted ‘use and throw’ policy in case of T.Harish Rao, who worked day and night for building TRS in Telangana and bringing the party to power in Telangana.

Jagan should not forget that he was attacked by TRS leaders and activists with stones in Manukota in Warangal district in May 2010, to obstruct his Odarpu Yatra. Jagan was forced to cancel his Odarpu Yatra in Telangana.

Jagan should not forget KCR’s abusive words against his father YS Rajasekhar Reddy, during Telangana statehood agitation and even after becoming Telangana CM.

As Telangana CM, KCR described YSR as ‘durmargudu’ in Assembly and also as ‘thief’ who stole Telangana water to Seemandhra.

Jagan can meet KCR. But it should be only CM-to-CM and government-to-government relations and nothing more than that.

If Jagan tries to move closer beyond this, KCR will be always ready to ‘trap’ him and everyone knows what would be the outcome if anyone falls in “KCR’s trap”. #KhabarLive