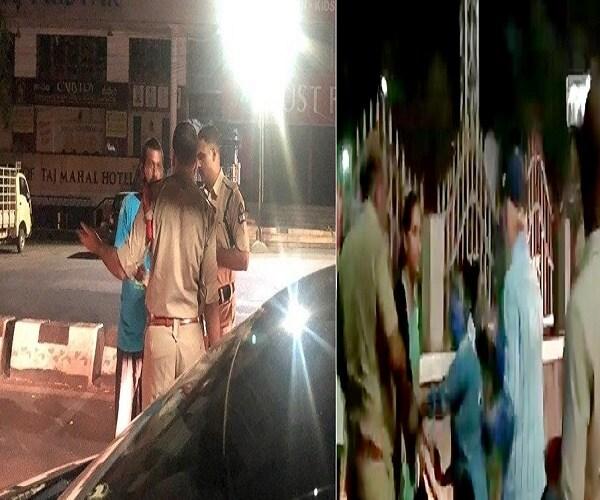 Despite journalists, doctors, nurses, and health workers being exempted from the state lockdown as they are enlisted under ‘essential services’ by the Telangana government, several reports have emerged of them being attacked by the police on the first day of curfew. Curfew has been imposed in the state from 7 pm to 6 am as part of the lockdown.

Ravi Reddy, the bureau chief of Hindu newspaper was physically assaulted and abused by the Begumpet police, for being on the road, during the curfew hours. Reddy was returning home after work. Although journalists are exempted from the curfew as per Government Order 45, Reddy was held by his neck and pushed by the police on duty at Begumpet.

The incident took place around 10.15 pm, near the end of the Begumpet flyover, which was barricaded by police. Reportedly, there was a mild lathi-charge as well, when journalists gathered around and questioned the police.

Speaking to #KhabarLive, Reddy said, “I was waiting for the police to remove the barricades. Soon after, at least 20 vehicles including many journalists had gathered behind. I went and spoke with an Assistant Commissioner of Police level officer, I showed my identity card and explained that I was a journalist and we are exempted from the curfew. But he instead and asked me to speak with the Sub Inspector. But the SI didn’t pay heed. After a while, the vehicles were diverted towards Fatehnagar.” Reddy is a resident of Old Alwal which is in Secunderabad.

Ravi Reddy reasoned with the police that he needed to proceed straight towards Secunderabad. However, the SI and constables manhandled him, and forcibly pushed him into his car. “I was held by the neck and heckled,” Reddy said. He added that none of the police personnel were wearing their nameplates.

After moving the car a little ahead, Reddy reported the harassment to their Resident Editor. Subsequently, the Director-General of Police and the Hyderabad Commissioner was informed. “I have been working as a journalist for the last 24 years. My stint included working in a Naxal-affected area but I never faced such a situation,” Reddy said.

ALSO READ:  Why 'Bureaucrats' Are Not Comfortable With 'Chief Minister' In Andhra Pradesh?

TUWJ said that they would be meeting DGP Mahender Reddy and give a representation in this regard. “When the Chief Minister himself clearly said that print and electronic media are essential services, the harassment of the journalists means that the police are violating the Government Order. This highhandedness needs to stop. We are risking our lives and doing our job. We are cooperating with the government to tackle the crisis, and this is the treatment we are receiving. We condemn this,” Virahat said.

Similarly, duty doctors and nurses faced harassment from police and some of their vehicles were vandalized by police.

Dr. Sidhardha K, a doctor from Osmania Hospital, recalling his ordeal said, “I left the hospital at 9 pm. On my way home, I was stopped by police who said I wasn’t allowed to be outside. I showed them my identity card in a digital form, but the police officer refused to listen and told me again I wasn’t allowed to be outside. They hit me and broke the glass and visor of my bike when I tried reasoning with them.”

The doctor said that he filed a complaint with the Lalaguda police in this regard. Another PG student from Osmania Hospital said, “I was on the way back from my shift at night when the police stopped us. There were three of us in the car as there have been issues arranging for rides during this time.” As per the Government Order issued on Monday only two persons can travel in a car. #KhabarLive