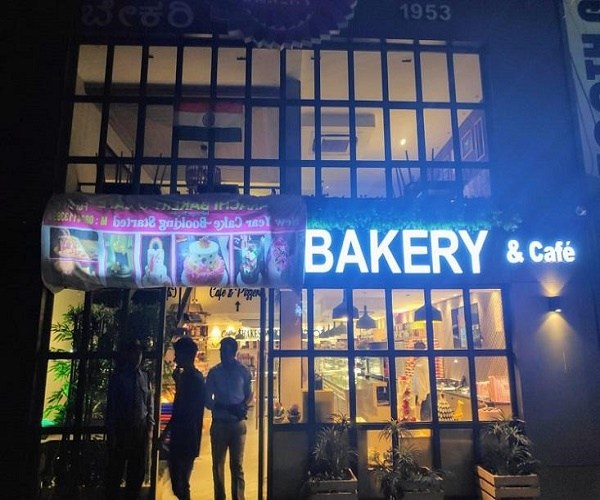 A Karachi Bakery outlet in Bengaluru was forced to cover up the word ‘Karachi’ on its main name board on Friday, after a mob protesting the reference to Pakistan gathered in front of it. This comes more than a week after 49 CRPF personnel were killed in a terror attack in Kashmir’s Pulwama district.

The incident occurred between 8 pm and 8.30 pm on Friday evening on 100 Feet Road in Indiranagar when a group of 20-25 men assembled in front of the bakery and raised slogans, insisting that the establishment change its name. The men refused to identify themselves but forced the staff to cover ‘Karachi’ on the name board.

The staff, fearing repercussions, went on to cover that portion of the name and also put up the Indian national flag on their building. However, there was no incidence of violence or damage to property.

Speaking to #KhabarLive, the manager of the establishment, said, “The mob stayed for about half an hour. They demanded us to change the name. The men claimed to know people in the army. They thought we are from Pakistan. But we have been using this name for the last 53 years. The owners are Hindus; only the name is Karachi bakery. To satisfy them, we put up the Indian flag.”

Despite the incident, the bakery continued to operate until its scheduled closing time of 11 pm.

Soon after Pulwama attack, many students and traders from Kashmir were attacked and harassed by mobs in various parts of the country, including Dehradun, Jodhpur, Ambala, Panchkula, Delhi and Patna.

This attack on Karachi Bakery took place on a day when the Supreme Court ordered the central and the state governments to act against the boycott of Kashmiri establishments and attacks on Kashmiris who are away in other states for studies and work.

Even former Jammu and Kashmir Chief Minister Omar Abdullah met Union Home Minister Rajnath Singh, asking for a nodal officer from the union ministry to address such concerns on Saturday.

Karachi Bakery was founded by Khanchand Ramnani, who migrated to India during the partition in 1947. The bakery’s first outlet was opened in Hyderabad and has grown into a nationwide franchise. The bakery is popular for its fruit biscuits. #KhabarLive