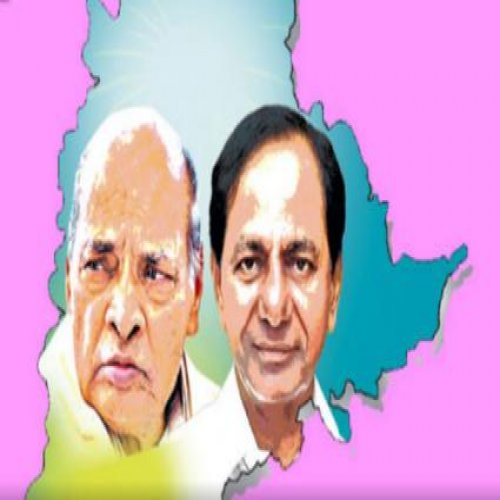 Facing criticism about the handling of COVID-19 and rising anti-incumbency sentiments, the Telangana chief minister is falling back on the comfort of regional sentiments.

With his government facing the heat amid allegations of mishandling the COVID-19 crisis, Telangana chief minister K. Chandrashekar Rao has chosen to revive a tactic that has proven to be successful in the past – rekindle the Telangana sentiment.

KCR, as the Telangana Rashtra Samithi (TRS) chief is popularly known, has been speaking about self-pride of his state’s people once again, this time by demanding greater recognition for former prime minister P.V. Narasimha Rao. Using the centenary celebrations of the veteran Congress leader to his advantage, KCR has written to Prime Minister Narendra Modi to bestow the Bharat Ratna, the highest civilian award, on Narasimha Rao.

The TRS government has turned PV’s centenary birth anniversary (June 28) event into year-long celebration, with KCR projecting him as Telangana’s “muddu bidda”– son of the soil – who became the first prime minister from South India.

Pamulaparthi Narasimha Rao, or P.V. Narasimha Rao, was born in Warangal district of Telangana. He is sometimes referred to as the ‘Father of Indan Economic Reforms’, for the liberalisation of the economy during his term as prime minister. He is also accused of inaction during the demolition of the Babri Masjid, but was exonerated by the Liberhan Commission. PV was also embroiled in various corruption charges.

Obviously, the state Congress does not want to be outdone by its rival and joined the race for the PV’s legacy, albeit hesitantly. Dasoju Sravan, a spokesman of the Telangana State Pradesh Congress Committee (TSPCC) declined to comment on the state unit celebrating PV’s birth anniversary, when the former prime minister was allegedly “dishonoured” by the party national leadership, saying “it is a sensitive issue”.

The TRS chief urged the NDA government to name the University of Hyderabad after Narasimha Rao and provide space for his portrait in the central hall of the Parliament. KCR used the occasion to accuse the Congress top brass of having meted out shabby treatment to the departed leader even in his death. PV’s mortal remains were not allowed into the All India Congress Committee (AICC) head office to let the party’s rank and file say their final goodby, KCR alleged. Driving his point home, the Telangana chief minister also got PV’s family members to recall how their wish to cremate the body in Delhi – his karma bhoomi for decades – was bluntly denied.

Why is a regional satrap embracing a stalwart from his rival camp? Analysts say KCR with such a move is aiming to kill the two birds with one stone—the rise of BJP and the Congress on his home turf.

KCR achieved his goal of a separate Telangana state six years ago by mastering the art of regional sentiment. It is with the same sentiment that he decimated the opposition and rode back to power for the second time with a sterling performance in the 2018 state elections. However, the onward march of his party’s juggernaut hit the roadblocks in the parliament elections in 2019, with the BJP and the Congress making significant gains.

KCR hopes to recalibrate the power of regional sentiment by projecting Narasimha Rao as an icon of Telangana to match the BJP’s Hindu nationalist agenda, says Tirumalai Inukunda, a retired political science professor who taught at the University of Hyderabad. He told The Wire that the TRS’s regional sentiment was overshadowed by the BJP’s nationalist agenda in the last general elections.

Allegations of KCR establishing dynastic family rule and failure to deliver a slew of promises made to the people have upended his apple-cart. Anti-incumbency against the TRS government is rising. The Lok Sabha poll results made way for the resurgence of opposition parties. The BJP won four of the state’s 17 Lok Sabha seats, including the one held by KCR’s daughter K. Kavitha. The Congress secured three seats in that election.

According to Tirumalai, the TRS badly needed to renew the vigour of regional sentiment to overcome growing disillusionment among the people over his government’s “non-performance”. A sense of alienation prevails in the Backward Classes, Scheduled Castes and Scheduled Tribes that KCR has failed to ensure social justice.

More recently, the Telangana government has drawn sharp criticism from different sections over the handling of the COVID-19 pandemic.

While the Telangana chief minister has been pioneering PV’s image as a leader of Telangana, it is ironic that Narasimha Rao was known to be a staunch integrationist who advocated a united Andhra Pradesh state.

Indeed, he strove hard to see the formation of a Telugu linguistic state during Jahawarlal Nehru’s regime. It is also ironic that his tenure as chief minister of the united Andhra Pradesh was cut short by regional movements. Rao became the CM on September 30, 1971 and stepped down on January 10, 1973, when President’s rule was imposed to control the Jai Andhra movement, which began as a reaction to the Telangana movement.

It is also curious that in the 1984 parliament elections Narasimha Rao failed to win in his native Hanamkonda seat in Telangana. This was despite the prevalence of a pro-Congress wave triggered by the killing of Indira Gandhi. He was instead elected from the Ramtek constituency in Maharashtra, where he also won a second time.

After his ascendency to the PM post in 1991, he was elected from the Nandyal Lok Sabha seat in the Andhra region, with a massive majority of 5.80 lakh votes. The Telugu Desam Party, headed by N.T. Rama Rao, did not field a candidate against Narasimha Rao in that election. NTR too had praised PV as a son of the soil.

Therefore, the TRS and KCR’s move to project him as a leader of Telangana would paper over the Congress leader’s complex political history.

Y. Girijapathi, a netizen from Andhra Pradesh, sought to know the rationale behind KCR, who led the Telangana movement, embracing Narasimha Rao, a staunch integrationist. However, Pathuru Sudhakar Reddy, a former MLC of the TRS, said the question of whether PV would have supported the statehood of Telangana ceases to exist in the current scenario. “We have decided to let the whole world know of the great virtues of our son of the soil, beyond any political beliefs he may have had,” he said.

On the other side, an umbrella group of various Muslim organisations in Telangana has appealed to the state government to withdraw its decision to organise birth centenary celebrations of former Prime Minister PV Narasimha Rao, saying the move has hurt the sentiments of the Muslim community.

UMF is headed by Moulana Raheemduddin Ansari, who is the chairman of Telangana Urdu Academy, a government body.

The group is close to All India Majlis-e-Ittehadul Muslimeen (AIMIM), a friendly party of KCR’s Telangana Rashtra Samithi (TRS).

Though AIMIM is also part of UMF, the statement issued by the body did not carry the name of any party leader. The clerics and other prominent people who issued the statement are considered close to AIMIM chief and Hyderabad MP Asaduddin Owaisi.

AIMIM’s critics have questioned Owaisi’s silence over the centenary celebrations launched by KCR.

The Hyderabad MP has friendly ties with KCR and has been a supporter of the latter’s outlook, which is considered secular. Owaisi’s party, UMF and other Muslim groups backed TRS in the 2018 Assembly elections and last year’s Lok Sabha polls.

UMF pointed out that it was during Narasimha Rao’s regime that Babri Masjid was demolished at the disputed site in Ayodhya, causing huge damage to the country’s secular fabric.

“Narasimha Rao while being in Congress implemented the agenda of Sangh Parivar,” it said and reminded KCR that hundreds of Muslims were killed in the post-demolition riots and Muslim youth were jailed under black laws like Terrorist and Disruptive Activities (Prevention) Act and tortured.

The Muslim leaders advised the Chief Minister to cancel Narasimha Rao’s centenary celebrations and instead focus on containing spread of COVID-19 in the state.

Meanwhile, Jamaat-e-Islami has also opposed the TRS government’s move to organise centenary celebrations and termed this as a burden on the public exchequer and a waste of time.

Jamaat’s Telangana unit chief Mohammed Hamed Khan said that at a time when COVID-19 was spreading fast and people were worried over lack of proper healthcare facilities and infrastructure, the TRS government was wasting public money, time and energy on birth centenary celebrations of Narasimha Rao.

Khan told the Chief Minister that centenary celebrations would reopen the ‘wounds’ of Muslims. He also pointed out that it was due to Narasimha Rao’s condemnable actions that his own party Congress dumped him. #KhabarLive #hydnews