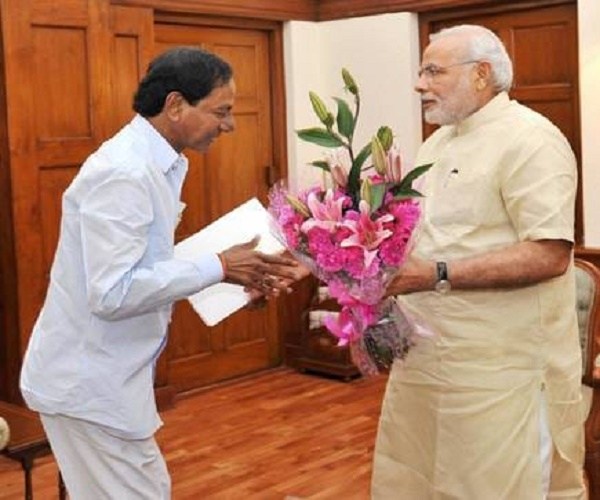 It’s a tale of trust deficit. During the statehood movement, many believe that Telangana Rashtra Samithi (TRS) patriarch K Chandrasekhar Rao earned a reputation for being untrustworthy, particularly through his oft-repeated saying, ‘I don’t mind kissing even a hairy caterpillar if it realises my dream.’ But he followed his own words at the end of the day.

After the UPA-II’s decision to concede his demand for a separate state for his native Telangana, he and his family took part in a photoshoot with then Congress President Sonia Gandhi with a promise to merge his party with the grand old party. But he then fought the Congress in 2014 and rode to power, claiming to be the sole achiever of Telangana’s statehood.

KCR then appeared as a trusted ally to Prime Minister Narendra Modi, an image he seemed to reinforce in action. He backed most of the NDA’s controversial decisions, from GST (Goods and Services Tax) and demonetization to the use of electronic voting machines (EVMs) in elections, KCR repeatedly gave credence to that image. The TRS leader stood with Modi at a time when all opposition parties, headed by TDP’s Chandrababu Naidu and the Congress, made EVMs a campaign issue in the run-up to the recent Parliament Elections.

At the same time, however, as an architect of the Federal Front, he saw himself as a potential Prime Ministerial candidate, rising to power with the support of regional parties. He visualised a fractured verdict and even proposed leading a coalition government. KCR even suggested that he was not averse to seeking support from the Congress to realise his ambition.

But once the results came out, Narendra Modi’s resounding victory put an end to that hope.

Modi, KCR in the same boat?
Paradoxically, Narendra Modi, with Amit Shah by his side, has earned a reputation through his hire-and-fire approach. It has become evident through his treatment of Naidu in Andhra Pradesh and JD(U)’s Nitish Kumar in Bihar. There’s nothing wrong with a political party’s aim to grow, but Modi’s feverish attempts to pillion-ride into states where his party is non-existent breeds distrust among allies. Modi needed Nitish and Naidu for numbers in the Parliament. When Modi ultimately had more numbers than he needed, a leader like Nitish had to struggle for a voice.

Riding two horses at once
Back home, KCR attempted to find an ally in the AIMIM (All India Majlis-e-Ittehadul Muslimeen), while staying in the good books of Narendra Modi during his first term. KCR’s appeasement politics obviously leaves room for the BJP to grow in Telangana.

Up until the December 2018 state elections, the BJP was not a force to reckon with in Telangana. In fact, its numbers in the state Assembly fell from four in 2014 to one in 2018, with a drop in vote share from 8.7 percent in 2014 to 7.07 percent. But the BJP remarkably demonstrated its strengths with an increased vote share of about 19 percent in the 2019 general elections.

Suddenly, the BJP had turned into a potential threat to the TRS. Its substantial gains in the 2019 general elections were largely attributed to the Congress’ failure to fill the void after it suffered a massive defection of lawmakers to KCR’s camp.

The BJP did not stop merely storm the TRS bastions, but managed to claim four Lok Sabha seats. The TRS saw one embarrassment after another, including the defeats of KCR’s daughter, Kavitha Kalvakuntla, a sitting MP in Nizamabad and his confidante B Vinod Kumar in Karimnagar in North Telangana. In south Telangana’s Mahabubnagar, BJP finished second.

It’s not only time for KCR to sit up and take notice, but also to revisit his soft approach towards Modi and his party in order to defend his regime.

Prof K Nageswar, who teaches journalism at Osmania University, says KCR paid a heavy price for his inability to visualise a rival in the BJP in general elections.

KCR now appears to be drawing a line between himself and Modi’s government. Maybe that’s the reason he skipped Modi’s swearing-in ceremony and the NITI Ayog meeting. KCR also seems to be trying to push forward his dream project in Kaleswaram without Modi’s assistance. Notably, the TRS chief has conspicuously made personal visits to the neighbouring Chief Ministers in Andhra Pradesh and Maharashtra, with an invite for the launch programme of the Kaleswaram irrigation project built on the Godavari River. #KhabarLive