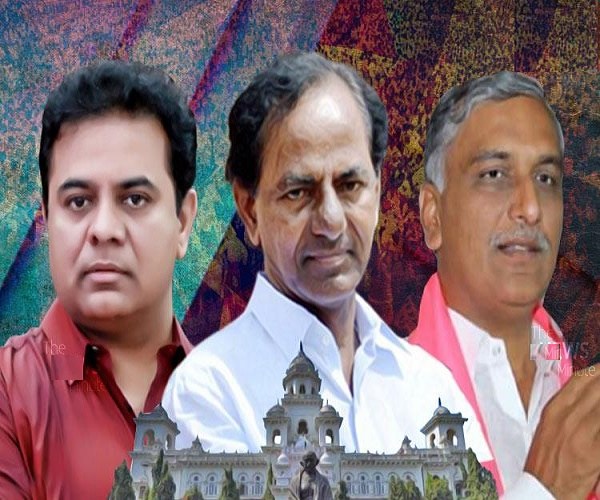 With the results of the Lok Sabha elections not turning out the way he expected it to be and his vision of a non-Congress, non-BJP Federal Front falling flat in his own backyard, Telangana Chief Minister K Chandrasekhar Rao is now maintaining ambiguity on the fate of his son K T Rama Rao and his nephew T Harish Rao, both senior party leaders.

In February, the state government expanded its cabinet, with 10 ministers being sworn in. While the expanded cabinet had old faces, KCR’s move to not induct KTR who had won from Sircilla assembly constituency and Harish Rao, who had won from Siddipet, had raised eyebrows. Both politicians, known to be close to KCR, had instead been given the task of ensuring TRS’ win in all Lok Sabha seats in the state. With the same plan in mind, KTR was also made the Working President of the TRS.

While the initial plan was for KCR to play a role at the Centre and hand over power in the state to the two leaders, with things failing to work out, there is speculation that Harish Rao and KTR may be inducted into the cabinet.

Sources tell #KhabarLive that while there were internal party discussions on the possible expansion of the cabinet but a final call was yet to be taken. A reshuffle is likely by the end of June as the cabinet presently has 11 members, including Deputy CM Mahmood Mohammed Ali, and can have a maximum of 17 ministers. Many portfolios including Information Technology (IT) and Irrigation continue to be held by the Chief Minister

The Telangana Chief Minister is upset as the Lok Sabha election results came as a major blow to him. Confident of sweeping the state and repeating his performance from the Assembly elections in December last year, the Telangana Rashtra Samithi (TRS) had been drumming up support for a consortium of regional parties. However, out of the 17 MP seats up for grabs in the state, the BJP won 4, while the Congress won 3, leaving the TRS with only 9 MPs.

In the biggest shock perhaps, KCR’s daughter, Kavitha, was defeated by the Bharatiya Janata Party’s D. Arvind by over 71,000 votes in Nizamabad. Party leaders said her prospects were marred by the entry of a record number of candidates including 178 farmers who wanted to highlight their problems like lack of remunerative prices for turmeric and red jowar.

Ministers to be shunted out?

KCR, however, is reportedly not too upset with KTR and Harish Rao. While the former was in charge of coordinating with leaders across the entire state as campaigning was underway, the latter was put in charge of Medak, where the TRS won with a huge majority.

However, he is upset at others. Two of his ministers, Talasani Srinivas Yadav and Malla Reddy, lobbied within the party to ensure that their son and son-in-law get two MP tickets respectively, and both first-timers faced defeat. While Talasani Sai Kiran Yadav lost the Secunderabad seat to the BJP, Rajashekar Reddy lost the Malkajgiri seat to the Congress. Both the leaders are not long-time party loyalists either, and had defected from the TDP after bifurcation.

Additionally, sources say that KCR is also upset with Education Minister G Jagadish Reddy, who was tasked with winning the Nalgonda and Bhuvanagiri constituencies. The TRS chief, was already miffed at the way in which the Intermediate results fiasco was handled, and with both constituencies going to the Congress, it is likely that Jagadish may be shown the door. #KhabarLive