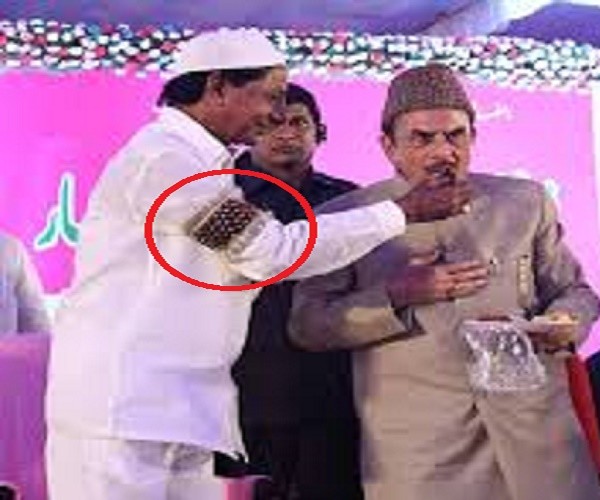 In the run-up to the Assembly polls, political merchandise like badges, flags and even sarees have caught the attention of the political parties and they are being sold like hot cakes. While the TRS and BJP have their cash counters ticking, the Congress seems to be lagging behind as it has not announced its candidates yet.

With Assembly elections drawing close, party offices in Hyderabad are bustling with party workers joining in scores. And, they make sure to buy memorabilia and promotional products cutting across party lines.

The red-coloured cloth called Imam-e-Zamin, made famous by caretaker chief minister K Chandrasekhar Rao, who is often seen wearing up his sleeve is in much demand among TRS supporters now.

“A lot of members, especially, those who come from districts make sure to buy at least one product from us. It’s like a collection for them to remind themselves of their visit to the political party head office,” says an elated N Krishnakantha, who sells poll merchandise at the BJP party office.

Selling promotional material of political parties has become a much sought after business now. While a lot of these products are priced under Rs 100, they are bought in bulk quantities by party workers to be used in the election campaign.

There are several items like wristbands, pens, badges, caps, flags and sarees to attract voters. The price of the poll material varies between Rs 5 and Rs 300.

Seasonal products like a woollen scarf is the latest product that has become the most sought-after product.

“The woollen scarfs, which we import from Delhi and Punjab, are being sold like hot cakes,” Krishnakantha said.

Interestingly, the sellers at the Congress party are unhappy with the sales and the reason seems to be the ambiguity in the selection of candidates. The party, which is in alliance with TDP, TJS and CPI, has not finalised seat sharing with its allies yet. “The Congress party has still not announced its list of candidates for the elections. With no clarity on that, the sales, usually in bulk orders, are yet to begin,” said Nageshwar Rao, who sells Congress promotional products at the party office.

The e-tailers are also not leaving any stone unturned as several promotional products are sold but with a twist. The offline store owners allege that the prices are exorbitant as the profit margin is more than 100 per cent. “We are selling a woollen scarf for `80 but the online stores are selling between `140-160 which is exorbitant. The profit margin we have is around 5 per cent,” Krishnakantha said. #KhabarLive