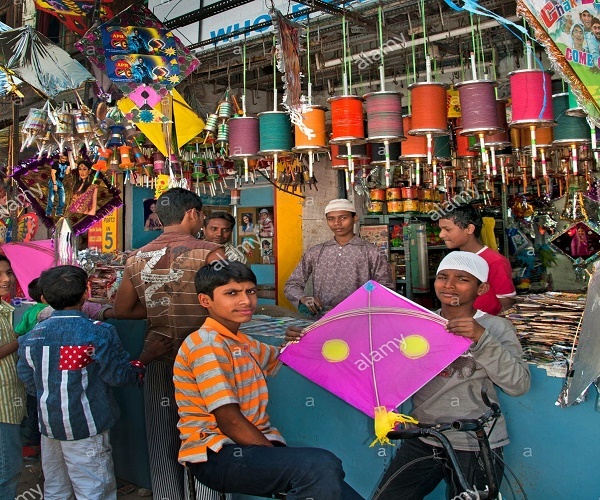 Those involved in gudumba business have shifted to selling kites and idols. The street between Purana Pul and Mangalhat in the old city is awash with mutli-coloured kites, balls of coloured thread and other paraphernalia needed for flying kites.

Smile is back on the faces of traditional kite makers of Dhoolpet. The reason for their confidence is largely due to the plastic ban in the country, due to which arrival of plastic kites to the local markets in the city has drastically come down.

Dhoolpet and Gulzar Houz are two traditional kite markets where several hundreds of traders set up temporary stores in the run up to the annual Sankranti festival. Although, barring a few months, kite flying is a year-long affair, traders tend to turn-up in large numbers specifically for Sankranti.

Hundreds of families in the areas of Dhoolpet, Mangalhath, Yakutpura, Dabeerpura and Vattepally make kites for months at a stretch to cater to the demand at the kite markets.

Nevertheless, the business for paper kites had come down in last few years with the flooding of plastic kites in the market. “We are happy after various States imposed ban on plastic kites. Traders are now approaching us and placing orders for paper kites. Unfortunately, we are not geared up for this season but for sure next term we will be fully prepared,” said Kishan Singh, a kite maker from Lower Dhoolpet.

The traders pay anywhere between Rs 30 and Rs 100 to each craftsman for making and supplying a kite. “If three members of a family work together, they can make anywhere between 150 kites and 200 kites in a day. Problem is that there are not many people left in this vocation. Due to low demand, in last few years many have switched over to other trades,” said Vimala Bai, a crafts woman from Dhoolpet.

Narsing Rao, a shop keeper from Jalli Hanuman said that the traders were now selling off the stock they had purchased few months ago. “Next year, people will see a variety of paper kites besides the traditional designs, we expect more colourful printed kites akin to the plastic,” he said.

Already paper kites are being sold at Dhoolpet and Gulzar Houz at a price between Rs 3 and Rs 20 each depending upon the size and design. “Sales are gradually picking up in the run up to the festival. Earlier, since November we had rush at the stores,” said another trader.

As Sankranti draws closer, the hub of kite trade in the city is a noisy hubhub. “There are more shops now than ever before,” says Manoj Singh of Bharat Kites, one of the oldest and biggest kite shops in the city.

And thereby hangs a tale.

Three years after the crackdown that shut the industry that manufactured bootleg liquor known as gudumba, many of the men involved in the trade shifted to kite business. The result: a sharp surge in the number of shops that sell kites in the area.

Traditional Manja makers
The traditional manja makers at Dabeerpura and Dhoolpet have their hands full this kite season. Ever since the Chinese made Nylon manja was banned by the authorities, the demand for local manja here has grown steadily.

The traditional thread manja – both the local and Barelli variety – are made by a handful of families along the Dabeerpura stretch and Mangalhath – Musi River banks during the Sankranti festival.

The traditional manja is made using locally available ingredients including glass powder. The makers make anywhere between Rs 100 and Rs 120 for 1,000 meters of the thread. The finished manja is then rolled on the “charakh” before it is sold in the markets.

“Now there are only a handful of families in this vocation. Several of them have shifted out of it due to loss of business and no more interested in getting back as it is full of uncertainty now,” said Shaik Omer, a manja maker from Dabeerpura.

To make up for the demand, the traders at the Hussainialam, Gulzar Houz and Dhoolpet are now sourcing the ‘manja’ from north India during Sankranti. “Locally we are unable to get it made because the number of families who made it has come down. We are placing orders with the traders in Uttar Pradesh and Delhi,” said Ishtiyaq, a trader at Gulzar Houz.

Low profit
“I quit the gudumba industry as there was too much pressure from the police. The risk was high. This is much better, though the margins are lower. The profit margin is just 10% in the kite business, but there is no pressure except for the occasional raid for Chinese manja,” says Dharam Singh, a reformed bootlegger who switched to selling kites and idols three years ago.

Bulk purchases
The area known as Dhoolpet is one of the biggest trade centres for kites in Telangana along with the area near Gulzar Houz near Charminar. Traders from across the State as well as from the neighbouring States like Karnataka, Maharashtra and Andhra Pradesh come to the city to buy stocks in bulk.

Akshay Singh too was formerly in the gudumba trade. Now he sells kites and idols. “

This is a low-profit trade. While others have taken to driving cabs, or become delivery executives and taken up other trades, I have switched to this. For Ganesha puja, we get small idols from different places in Maharashtra and sell them here. For kites, Hyderabad is a big centre,” says Mr. Singh, who started his business three years ago. #KhabarLive