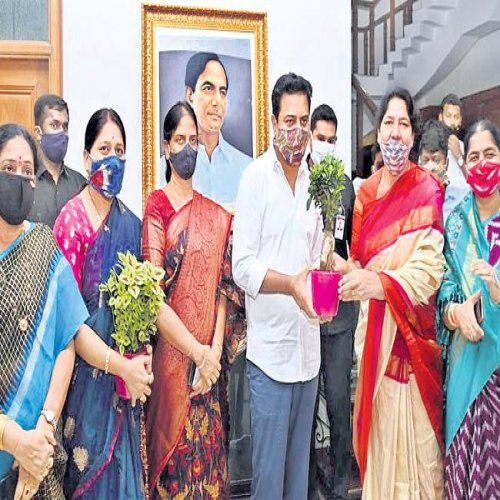 It is an open secret that TRS working president and IT minister KTR is a de facto CM of Telangana and it is only a matter of time he takes over the mantle from his father KCR.

But, the TRS leaders and cadre have already decided that KTR is the future chief minister and therefore, they are going all out to get into his good books.

It was evident from the way the party leaders went overboard to pamper the TRS working president on the latter’s birthday all over the state on Friday.

Starting from extending him personal greetings to wishing him through tweets, they did everything to attract his attention.

Though KCR’s birthday in April was completely a low-key affair due to lockdown, KTR’s birthday was like a festival across the state notwithstanding the restrictions imposed by the authorities on account of Covid-19 pandemic.

Banners, posters, hoardings and buntings were erected all over Hyderabad and huge traffic restrictions were imposed to enable the party workers go to his camp office at Pragathi Bhavan.

Blood donation camps, and personal deeds through gift a smile initiative by supporters and fans were held at different places on occasion of KTR’s birthday celebrations.

On the occasion of the birthday of the IT Minister the Telangana Information Technology Association (TITA) in collaboration with the State cultural department launched “T-Culture” app.

Minister for Women and Child Welfare Satyavathi Rathod has directed the concerned officials on Friday to serve sumptuous special food for the children at the State run Sishu Vihars and Juvenile Homes on Friday on the occasion of the birthday of KTR. #KhabarLive #hydnews