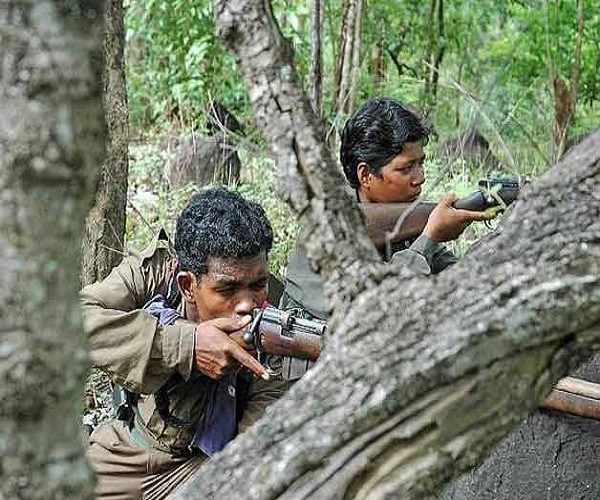 The arsenal of naxalites of the Communist Party of India (Maoist), or Maoists, is as robust and diverse as it is sophisticated. The security forces have, until now, not been able to apprehend any member of the Maoist military think-tank –– the Central Military Commission (CMC) –– that guides all armed activities of the rebels. While one CMC member died due to a heart attack in March 2018, another surrendered to the police in December 2017.

The CMC at present comprises five members. Besides, the Maoists’ volition to commit violence and launch attacks –– big or small –– persists. If any, it might have received a fillip after Nambala Kesava Rao alias Basava Raju replaced Muppala Lakshmana Rao alias Ganapathy as the general secretary of the CPI (Maoist).

Indigenous and Ingenious
The Maoist arsenal is indigenous, as well as ingenious. Largely, the Maoists equip themselves by looting weapons from the security forces. The rebels are following what Mao Tse Tung once said: ‘the enemy’s arsenal is our arsenal’. The guerrillas have come a long way from fielding traditional farm implements such as crowbars, sickles and spears to fielding a melange of weapons, including country-made weapons, single barrel breach guns (SBBLs), double barrel breach guns (DBBLs), light machine guns (LMG), self-loading rifles (SLRs), AK series rifles, INSAS rifles and rocket launchers.

Further, the rebels have also been tapping into the grey arms market within the country, and occasionally abroad. The then Home Minister of Andhra Pradesh had said on the floor of the AP State Legislative Assembly, on August 23, 1991, that the rebels (in their earlier avatar as the People’s War Group [popularly known as PWG]) had bought 20 sten guns and 60 AKs from the Liberation Tigers of Tamil Eelam (LTTE). Further, the Maoists signed a memorandum of understanding (MoU) with the People’s Liberation Army (PLA) of Manipur in September 2006, especially for sourcing weapons, as also for training with them.

According to a media report of January 29, 2019, the Special Cell of Delhi Police apprehended one Raj Bahadur, who was allegedly supplying ammunition to the Maoists and recovered 35 live cartridges from him. The Delhi Police had earlier announced a reward of Rs 1 lakh for his arrest. He was arrested earlier, too, in 2008, on similar charges from Odisha. This was not the first instance of apprehending Maoist arms suppliers. Earlier in 2018, two others were held from Delhi and Gadchiroli in Maharashtra.

Source of Ammunition
Pilferage from Ordnance factories is an important source of ammunition for these arms suppliers, who sell them to the Maoists, besides criminal gangs. Way back in December 2001, a carton containing ammunition with markings of Ordnance Factory, Kanpur, was seized from an arms dump of the rebels in Warangal district, now in Telangana. Besides, on January 13, 2015, Vikas Kumar, a native of Kanpur, was arrested in Karimnagar (Telangana) and 352 rounds of ammunition were recovered from him.

Lately, on May 7, 2018, it was reported that seven revolvers, one carbine and 10 rounds of ammunition were recovered after they were stolen from the Ishapore Rifle Factory (West Bengal). Interrogation of the six accused in the pilferage/theft also revealed that this was going on for the past 10 years and that they had earlier also supplied 16 INSAS rifles and eight SLRs. These were rejected as being faulty and were pilfered and sold away after carrying out repairs.

The ingenuity of the Maoists in the manufacture of weapons is noteworthy. For example, there have been instances when the Maoists uprooted telephone poles, cut them into two pieces, filled them with explosive material and used them as cannons. The rebels maintain production units in all areas of their operations and a dedicated team undertakes the repair and fabrication of weapons.

Rockets and Launchers
The Maoists have also designed and developed rockets and rocket launchers. Copies of the designs were seized for the first time in May 2003 from a Maoist dump along the Andhra-Odisha border in Malkangiri district. Thereafter, an R&D-cum-arms making unit was busted in Bhopal, Madhya Pradesh, on January 10, 2007, and drawings of cross-sections of rockets and rocket launchers were seized.

ALSO READ:  A Job In The Corporate IT Sector: A Blessing Or A Curse?

In fact, the Maoists got rocket launchers and empty rocket shells manufactured at seven different units in Ambattur, an industrial suburb of Chennai. Most of these were seized in two separate raids in Mahabubnagar (Telangana) and Ongole (Prakasam district of Andhra Pradesh) in September 2007. These rockets are crude and have missed the target, except on one occasion in Jharkhand when they had hit a BSF camp. When the Maoists attain sophistication in developing rockets, the damage that a rocket could inflict on static and strategic locations would be immense.

The Union Ministry of Home Affairs is factually correct when it states that there has been a sharp decline in Maoist violence over the past few years.

It would, however, be inaccurate to underestimate the Maoist military strength and their intent to commit violence. Therefore, the security forces would need to keep up the pressure they are currently applying on the Maoists. #KhabarLive