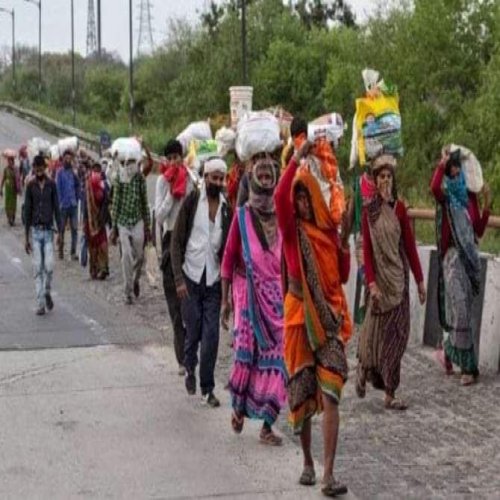 The extension of India’s national lockdown till May 4 has revived concerns that the country’s migrant workers, many of whom work in the unorganised construction sector, are being pushed to the brink of destitution.

A recent survey of more than 3,000 migrant construction workers conducted by Jan Sahas, an NGO, found the lockdown had robbed 90% of those surveyed of their only source of income and 42% of them did not have a day’s worth of food rations. Another survey of 11,000 workers, most of them construction workers, conducted by a group of 73 volunteers called the Stranded Workers Action Network, found that 96% had not received rations from the government and 89% have not been paid by their employers during the lockdown.

State governments have pledged to provide free food rations, and cash transfers of between Rs.1,000 to Rs. 6,000 for construction workers, but interviews with government officials and an analysis of the Comptroller and Auditor General of India (CAG) reports of 12 states shows that this monetary relief is a fraction of Rs 52,000 crores accumulated by state governments over years of levying a 1% to 2% worker welfare cess on construction projects.

Worse, construction workers must complete a cumbersome process of registration and renewal with their respective state boards to be eligible for relief and rations, implying that the most vulnerable workers invariably slip through the net.

This years-long pattern of under-expenditure, CAG reports indicate, is consistent across states irrespective of the political party in power; the only exception being the Communist Party of India (Marxist)-led government in Kerala which has spent more than the cess collected.

This reluctance to spend money on the workers it has been earmarked for is significant in the context of a March 24 advisory by the Ministry of Labour and Employment to all states and union territories to use the Rs 52,000 crores of available cess as coronavirus relief.

On 8 April, the Union Home Ministry said that Rs. 3,000 crores had been distributed among two crore registered construction workers in 31 states and Union Territories in amounts ranging from Rs. 1,000 to Rs. 6,000 —some 6% of the available funds.

Labour activists estimate there are 10 crore construction workers. The Government of India claims 3.5 crores of them are registered. While the central government has asked that all registered construction workers receive monetary relief, most states are giving money to only those registered workers who have renewed their membership and are deemed active members, a considerably lower number.

“What the state governments are doing is insignificant. I would not even say it is insignificant, it is pittance,” said Subhash Bhatnagar coordinator of the National Campaign Committee for Construction Workers, a platform of trade unions that had drafted the first social welfare legislation for unorganised workers that was eventually passed in the 1990s.

In interviews with #KhabarLive, state labour departments responded along familiar lines — a lack of data, the difficulty in identifying intended beneficiaries, and a sarkari reticence to spend money.

“We have introduced 18 welfare schemes. But we can only give money for those who it is intended for,” said Swami Prasad Maurya, Uttar Pradesh’s Labour Minister, adamant that construction workers had to register and renew their membership. “We can’t just spend the money because it is there.”

“The easiest thing is to just give out cash. It could be misspent,” echoed Vipul Mitra, chairman of Gujarat Building and Other Construction Workers Welfare Board. But as of May 2019, the Board that Mitra heads had spent only 7% of the funds it had accumulated over the past decade.

In 1996, the Government of India enacted the Building and Other Construction Workers Cess Act, which allowed for state governments to collect cess at the rate of not more than 2% of the cost of construction and allocate this money to the State Building and Other Construction Workers Welfare Boards (BOCWWB) to spend on the safety, health and welfare of the construction workers. When little was done to implement the new law, Bhatnagar said that his organisation moved the Supreme Court in 2006.

Since 2006-2007, most states have accumulated hundreds of crores in cess but do not spend enough on health and maternity benefits, life and disability cover, education, education, skill development and pension. Till September 2018, States and Union Territories had collected around Rs. 45,743 crores and spent Rs. 17,591, 38% of the available funds. That the Union Labour Ministry said the available cess was back up to Rs 52,000 by March 2020 offers an indication of just how much money flows through these state boards, who attract relatively little scrutiny.

Take for instance Uttar Pradesh, India’s most populous state, which has the highest number of registered construction workers in the country, but the Bharatiya Janata Party (BJP)-led state government spentonly 7% of the Rs. 4,246 crore worth of accumulated cess funds on 15% of these workers in 2018.

Now, the state government has announced that a total of 30.5 lakh migrant workers, which include 20.3 lakh construction workers, would receive Rs. 1,000 per month as emergency relief. The first instalment of monetary relief of construction workers works out to approximately Rs. 200 crore — indicating the state government could actually afford to spend a lot more, say activists like Bhatnagar.

The latest audit report on Gujarat said the state government had failed to transfer Rs. 375.97 crore to the Gujarat Board, which was in violation of the cess rules, and the Board had not finalised its accounts since 2006-2007.

As of May 2019, Gujarat’s worker welfare board had spent on Rs. 200 crores, or 7%, of the total cess collected since 2006-07, said Vipul Pandya, General Secretary of the Ahmedabad-based trade union, Bandkham Mazdoor Sangathan, based on state labour department’s response to a question raised in the Gujarat Legislative Assembly, and information he has received from the Gujarat Board.

Pandya said even the cess collected appeared to be much lower than expected in a state like Gujarat.

Pandya said that successive “capitalist” BJP-led governments had supported the big corporations over the construction worker, which had resulted in Gujarat collecting less cess than other states.

“There is so much construction here, so many new projects, but the cess is less. If the law had been implemented properly, the cess for Gujarat would have been 10,000 crores. I feel the cess that has come is mostly from the public sector, not the private sector,” he said.

The problem with the welfare board payouts, activists explain, isn’t just about state governments not spending enough — it is also about who they spend it on.

A cumbersome process that requires construction workers to first register themselves, and then continually renew their registrations has meant that states reach a small percentage of intended beneficiaries.

Government data from several states shows a significant discrepancy between the number of registered construction workers and those who are deemed active and receive benefits. Hundreds of thousands of workers do not renew their membership because they are poor, not educated and find the process too complicated.

In Punjab, the Congress Party government has given coronavirus relief worth Rs. 175 crores ― Rs. 6,000 each to almost three lakh construction workers who have renewed their membership, but government data shows there were 7.46 lakh construction workers as of 2018. And the latest audit report on Punjab shows that as of 31 March, 2018, the state had Rs. 833.13 crores in cess lying unused as on 31 March, 2018, with no more than 18% of the funds being used in any year from 2013 to 2018.

The social price of registration paperwork is most visible in Delhi, where the number of registered construction workers dropped precipitously when registration was digitised and the length of the online application form increased from four pages to 12 pages.

The latest audit report on Delhi rebukes it for its poor utilisation of cess as well as its poor registration of construction workers. Of an estimated 10 lakh construction workers in Delhi, the report said that only 1.49 lakh workers were registered with the Delhi Board as of March 2018. The number dropped to 40,000 in 2020, when the registration process was made more cumbersome.

Noting that Delhi had given relief to 32,358 of the 10 lakh construction workers in Delhi, Bhatnagar, the labour rights activist, said, “If you are giving money to 4% it will have no benefit, no impact.”

If you are giving money to 4% it will have no benefit, no impact
In Madhya Pradesh, the data shows 25.87 lakh registered workers in 2018, but less than five lakh presumably active workers received benefits, around 19%.

The “monetary and non-monetary costs” puts off even active registered workers from making claims to avail benefits, said Vidhya Soundararajan, an economic professor specialising in worker welfare at the Indian Institute of Management (IIM), Bangalore.

“The process of making that claim is extremely hard. There are so many impediments from beginning to end. It is a really hard thing for a worker, especially a daily wage worker, to do,” she said.

The process of making that claim is extremely hard. There are so many impediments from beginning to end.
Restricting beneficiaries
The tendency to restrict beneficiaries, honed over years of withholding benefits from some of the country’s most vulnerable citizens, is now visible in how states are doling out their emergency coronavirus cash transfers.

In Haryana for instance, the BJP state government had announced coronavirus relief of Rs. 1,000 per week each for 4.5 lakh registered construction workers, and allocated Rs. 70 crores as the first and second instalment of the subsistence package.

Yet, not all of Haryana’s 4, 56, 446 construction workers who have renewed their membership have been given monetary relief in March. 71, 043 workers were excluded, but received Rs. 4,000 through different insurance and pension schemes under Mukhya Mantri Parivar Samriddhi Yojana.

34,782 workers have been excluded in cases where both husband and wife have been registered as construction workers — shockingly, in such cases, one partner has been dropped from receiving benefits.

“The exclusion of one member when both husband and wife are registered members is an exclusionary afterthought and smacks of patriarchal mindset which imagines that two registered members are not independent souls,” said Himanshu Upadhyay, who teaches development at the Bengaluru-based Azim Premji University.

“States have accumulated huge unspent funds and very few beneficiaries of welfare schemes,” Upadhyay said. “Our migrant workers are desperate because the promises made to them are hollow. They know the welfare benefits have not reached them in the past.” #KhabarLive