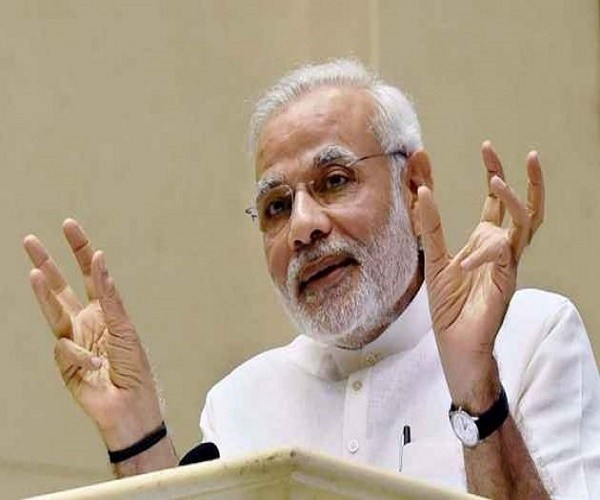 Prime Minister Narendra Modi on Monday said attempts to provide reservation to economically backward minorities in Telangana are a betrayal to the nation and an insult to those who framed the Indian Constitution. He also dubbed it as ‘treason’. Addressing an election rally of the Bharatiya Janata Party (BJP), he called for defeating any such move to protect the country’s unity.

Hitting out at the Telangana Rashtra Samithi (TRS) government for its move to increase reservation for economically backward minorities to 12 percent, Modi said he was surprised how the power-hungry were pushing for religion-based quota for the sake of their family and to save their seats of power.

Modi wondered from where the reservation for minorities would come when the Supreme Court had already fixed the upper limit of total reservation at 50 per cent.

Stating that the issue of religion-based reservation was discussed in the Constituent Assembly, the Prime Minister said the great personalities framing the Constitution decided against it in the interest of the country’s unity.

Modi wondered from where the reservation for minorities would come when the Supreme Court had already fixed the upper limit of total reservation at 50 percent. “They will take away the rights of Dalits, STs and OBCs from backdoor. Will you allow this crime?” he asked the participants in the rally held at L B Stadium in Hyderabad.

The Telangana Assembly had last year passed a resolution to increase reservation for minorities in jobs and education from current 4 percent to 12 percent and the same was sent to the Centre. TRS has repeatedly blamed Modi for the delay in implementing its poll promise made in 2014.

Modi also came down heavily on TRS, saying it destroyed Telangana the way Congress destroyed the nation. Countering Congress President Rahul Gandhi’s allegation that TRS is ‘B’ team of BJP, Modi said TRS and the Congress had common nature, character, thinking and policies.

The Prime Minister recalled that during the Karnataka Assembly elections, Rahul Gandhi used to dub Janata Dal-Secular (JD-S) as the ‘B’ team of BJP, but after the elections formed the government with the same party to keep the BJP out of power.

Branding the TRS and the Congress as the two sides of the same coin, he alleged that they have already started planning backdoor entry to prevent BJP from coming to power in Telangana.

He described dynasty politics as a threat to the democracy. He pointed out that barring the BJP, all major parties in fray in the Telangana elections were parties with dynasty politics and family rule. He said the Congress, TRS, Telugu Desam Party (TDP) and the Majlis-e-Ittehadul Muslimeen (MIM) all were family-ruled parties. “All these parties are becoming threat to democracy,” he remarked.

Modi said Telangana had wasted its five years of welfare due to the arrogance of one family. He alleged that the KCR family exploited emotions of Telangana movement for itself. Stating that Telangana had huge potential, he said the state could not progress because of the kind of rulers it got.

“Why people of Telangana demanded a separate state? Why they suffered so long for separate Telangana. Why so many youth sacrificed their lives? They did it for a bright future of Telangana. One family was not to be given the right to loot Telangana.”

Referring to the TDP’s alliance with the Congress, Modi recalled that N.T. Rama Rao had formed the TDP for the self-respect of Telugu people after former Prime Minister Rajiv Gandhi had insulted them. He alleged that Naidu for the sake of power and vested interests put the entire party into the lap of Rahul Gandhi.

Responding to Modi, AIMIM president Asaduddin Owaisi advised him to read the Constitution of India. “If you can’t understand the Constitution, I request you to take the help of somebody who knows it,” the Hyderabad MP told an election rally.

Speaking hours after Modi addressed a BJP rally in Hyderabad, Owaisi said the Prime Minister should read Article 15 and 16 of the Constitution. The AIMIM chief reminded Modi that his party’s government in Karnataka continued the reservation for Muslims. “In Maharashtra you are giving reservation to Marathas. Is it allowed?” he said.

“You can give reservation to Marathas, Jats and Gujjars but not to Muslims. As the Prime Minister you can’t discriminate against one community. You have taken oath on the Constitution and you are the Prime Minister of India, which also has Muslims.”

The Lok Sabha member from Hyderabad said while Muslims cannot be given reservation on the basis of religion, they can be extended this benefit on the basis of their social and educational backwardness.

He also advised Modi to go through Sacchar Commission, Mishra Commission and Sudheer Committee reports which amply make it clear that Muslims are the most backward socially and educationally after the Dalits.

“Our backwardness is proved but it is another matter that you don’t want to accept it. You merely make tall claims of ‘sab ka sath, sab ka vikas’,” he said.

Owaisi said the AIMIM would make all efforts to see that socially and economically backwards among the Muslims get reservation not just in Telangana and Maharashtra but all over the country. #KhabarLive