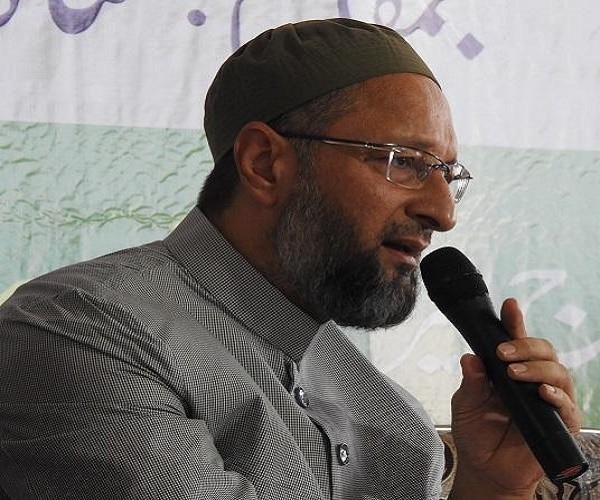 Hyderabad MP and All India Majlis-e-Ittehadul Muslimeen (AIMIM) chief Asaduddin Owaisi triggered a row after he claimed that a Congress candidate from Mudhol in Telangana offered Rs 25 lakh to cancel the former’s rally in Nirmal.

Speaking in Nirmal rally, the AIMIM chief said, as he held up his phone, “The Congress candidate said ‘stop Owaisi and I will give you Rs 25 lakh’. I have a recording. This is the Congress’ politics. What do you call such a party? You think you’ll buy me for 25 lakh?”

“They think that because my name is Asaduddin Owaisi, I have a beard and wear a cap, they can buy me? I am not going to be bought,” he added. The party on Tuesday later released a phone recording to the media which, it alleged, was between Rama Rao Pawer Patil and Bhainsa Municipal Chairman Jabair Ahmed from the AIMIM.

“Maheshwar Reddy (Congress candidate from Nirmal) came. He said he will give Rs 25 lakh, if you stop the event,” the man said to be Rama Rao Patil is heard saying. To this, Ahmed says, “That’s not possible. Even if he makes it Rs 50 lakh, I can’t do that. I can’t do anything about it.”

However, the first person continues to try and persuade Jabair over the course of the conversation, but Jabair refuses to succumb. Following this, the voice which seemingly belongs to Patil asks Jabair not to tell anyone about the offer and backs down, before hanging up the call.

“A massive crowd of people turned up to support me when I went to file my nomination. Seeing the crowd, TRS leader Indrakaran Reddy called Asaduddin Owaisi to Nirmal. The response was so dismal that they had to bring people from neighbouring constituencies to attend their events,” he said.

When Telangana caretaker Chief Minister K Chandrasekhar Rao dissolved the Legislative Assembly on September 6, he said that the ruling Telangana Rashtra Samithi (TRS) and the AIMIM were ‘friendly’ parties. In line with this, the TRS has put up seemingly weak candidates in the strongholds of the latter party.

ALSO READ:  Why Telangana 'State Cabinet' Is Not Formed Even After 40 Days Of Elections?

In his response, Owaisi told #KhabarLive at the time, “Our goal is that public at large should benefit from voting for us and there should be development especially for minorities like Muslims and Dalits. In the Telangana election, unlike the Karnataka election, there will be a majority government of the TRS. I’m convinced that K Chandrasekhar Rao will be the next Chief Minister.”

Telangana will go to the polls on December 7 and the counting of votes will take place on December 11. #KhabarLive