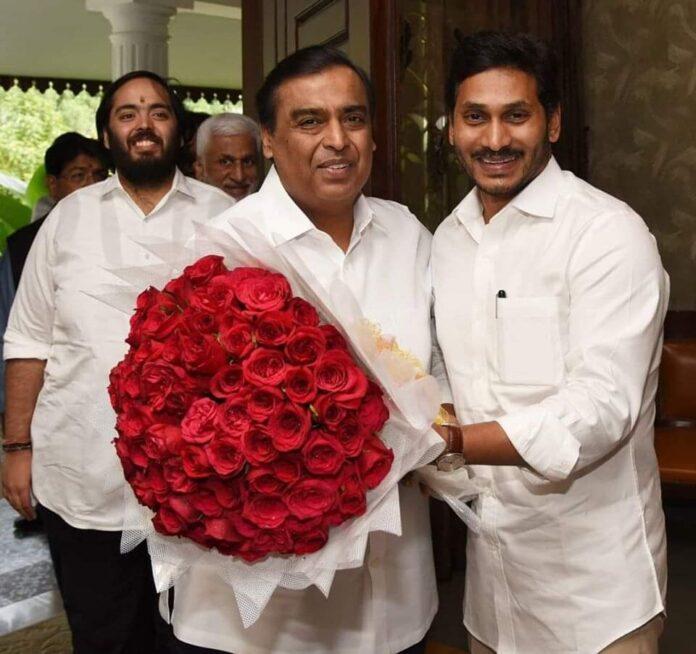 Mukesh Ambani was accompanied by his son Ananth Ambani and Parimal Nathwani, the two-time Rajya Sabha Member of Parliament from Jharkhand in a closed-door meeting.

Reliance has business interests in Andhra Pradesh and in 2018, Mukesh Ambani had made the grand announcement of starting an electronics park in Tirupati, spread over 150 acres. The park was supposed to manufacture mobile phones and television sets.

Though sources say the revival of the plan for the electronics park and other future investments by the Reliance group was discussed, the presence of Parimal has given rise to speculation that the meeting could have been more political in nature. Sources suggest that Ambani is attempting to get Nathwani re-elected as a Rajya Sabha MP, and if possible from Andhra Pradesh.

The polls for the four Rajya Sabha seats from Andhra Pradesh are expected to be held on March 26.

Nathwani, an industrialist himself, is a key associate of Mukesh Ambani and is set to complete his second term in office on April 9. In his second term as an MP, he has managed to garner just 40% attendance in the Parliament but has managed to ask 1383 questions. Nathwani is also Group President (Corporate Affairs) of Reliance Industries.

His renomination from his home state as an independent, however, appears to be difficult with former Union minister and Jharkhand Mukti Morcha (JMM) president Shibu Soren deciding to take a plunge back into politics with the upcoming Rajya Sabha polls.

It’s being speculated that the BJP lobbied with the YSRC Party to allow Nathwani to get elected as a Rajya Sabha MP from Andhra Pradesh. The state has a total of 11 seats in the Rajya Sabha and four are going to polls.

Reliance in February had signed an MoU with plans to set up a Rs 15,000 crore electronics manufacturing hub at Tirupati. The MoU was signed by the former Andhra Pradesh government which was at the time led by the Telugu Desam Party (TDP). In the May elections, the YSRCP won state elections and the electronics park eventually got scrapped by Reliance in November 2019. #KhabarLive