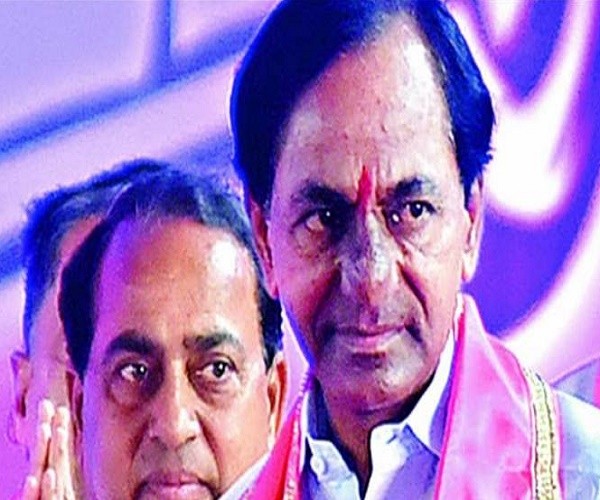 The Muslim vote will play a crucial role in deciding who wins the upcoming assembly election, which is why both TRS and the grand alliance (Congress, TDP and others) are trying their level best to woo the community.

“While half of my extended family is likely to vote for the Congress-Telugu Desam Party alliance, the other half thinks it is better to support the Telangana Rashtra Samithi which has done some good work for Muslims,” said Dr. Taha, an assistant professor at Centre for the Study of Social Exclusion and Inclusive Policy, Maulana Azad National Urdu University (MANUU), Hyderabad. Taha is from Suryapet district and his relatives live in Muslim-concentrated districts like Mehboobnagar, Nalgonda and Khammam.

“Those in favour of TRS cite schemes like Shaadi Mubarak, minority schools, overseas scholarships and budget for minorities” explained Taha. “However, those who are in favour of the Congress-TDP alliance, believe that KCR is just making a fool of Muslims by delivering speeches in flowery Urdu. Moreover, there is also a fear that TRS might once again join hands with BJP,” he added.

According to Taha, the situation his relatives are currently in more or less represents the mood of Muslims across the state.

Telugu writer and activist Yusuf Baba, better known as ‘Sky Baba’ echoed Taha’s observations. “Muslims are both happy and angry with KCR,” said Baba, a native of Nalgonda. “Happy because he built English medium residential schools for Muslims, started the Shaadi Mubarak scheme and because one of his deputy chief ministers is a Muslim,” Baba told The Wire. “At the same time, Muslims are suspicious of KCR because of his proximity with BJP and Modi in the recent past,” he added.

ALSO READ:  What We Need To Learnt From 'Animal Abuse' In India?

Apart from KCR’s proximity to BJP, people are also vary of the claims made in the name of work done for the welfare of minorities.

“There is a huge difference between what KCR claims and the reality,” said Amjedullah Khan, spokesperson of Majis Bachao Tahreek (MBT), a local political party. Pointing out the gaps in the budget earmarked for minorities welfare and the actual amount spent over three years, he claimed that “not even half of the earmarked amount was spent last year”.

It should be noted that as far as Shaadi Mubarak scheme is concerned, it is not Muslim specific. The scheme is for women above the age of 18. Amongst non-Muslims, it is known and promoted as Kalyana Lakshmi. The scheme was launched in October 2014 for SC/STs and minorities, but was later extended to one and all.

The Muslim vote will play a crucial role in deciding who wins the upcoming assembly election. Muslims constitute 12.7% of the total population in the state. From a total of 119 constituencies, the community plays a decisive role on nearly 30 seats. The importance of Muslim votes also becomes evident from how both TRS as well as the grand alliance (Congress, TDP and others) are trying hard to woo Muslim voters.

According Fasihullah Shaikh, editor of Hyderabad Youth Mirror, Muslims of the state can be broadly divided into two categories, rural and urban. “Rural Muslims have been traditional Congress voter and seeing new energy in Congress they are likely to once again vote for Congress,” Shaikh told The Wire. “As far as urban Muslims are concerned majority of them live in and around Hyderabad and likely to be intact with AIMIM, hence in support of of TRS.”

Like Taha and Baba, Shaikh also maintained that as of now Muslim voters stand divided. Notwithstanding, these observations many believe, TRS is likely to be preferred by majority of Muslims. Part of the reason of their conviction is based on AIMIM’s full support to the ruling TRS.

The Asaduddin Owaisi led All India Majlis-e-Ittehadul Muslimeen (AIMIM) is supporting TRS with full force. “I am convinced that K. Chandrasekhar Rao will be the next chief minister,” Owaisi declared recently. The party can directly influence voters in more than 20 constituencies, of which seven it has been winning in last two elections. In 2014, the party contested on 20 seats and performed reasonably well. However, this time it is only contesting eight seats even though the party had initially filed nominations for 21.

According to a report in LiveMint, “The decision is part of its tactical understanding with caretaker chief minister K. Chandrashekar Rao’s Telangana Rashtra Samithi (TRS), and could give Rao an edge in seats with sizable Muslim voters.” Apart from AIMIM, Jamaat-e-Islami Hind, an influential politico-religious organisation with substantial support base across Telangana has lent its support to TRS.

Meanwhile, last week, a number ‘Muslim intellectuals’ met Rajya Sabha MP Ahmed Patel, who is also Sonia Gandhi’s political advisor, during his visit to the capital city and promised their support to the grand alliance in order to defeat the TRS in Telangana.

But according to a senior journalist, who requested anonymity, the meeting is unlikely to have much influence following as far as electoral politics is concerned. “They are good for drawing room discussions and hall meetings but can’t influence the voters. They themselves know it very well,” the senior journalist said. #KhabarLive