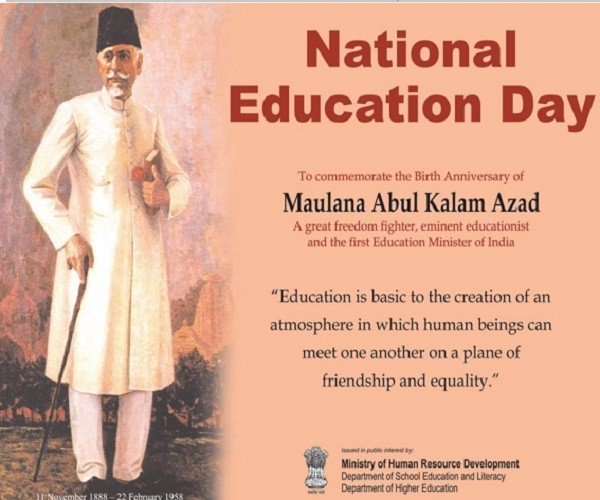 Just like we celebrate Teachers’ Day to commemorate the birth anniversary of Sarvepalli Radhakrishnan, India’s first Vice President, the nation celebrates the National Education Day on November 11 as a mark of respect to Maulana Abul Kalam Azad. The latter was a freedom fighter and independent India’s first Education Minister (served from 1947 to 1958).

Maulana fought for country’s freedom and in 1912, he started a weekly journal in Urdu called Al-Hilal to increase the revolutionary recruits. For his contribution – both as an educationist as a freedom fighter – he was awarded the Bharat Ratna in 1992.

The ex-minister was a renowned scholar and poet and was well-versed in many languages. His real name was Abul Kalam Ghulam Muhiyuddin and was known as a brilliant orator. He firmly believed in universal primary education, free and compulsory education for all children upto the age of 14, vocational training and technical education.

He strongly advocated the education of women. In 1949, in the Central Assembly, he emphasised the importance of imparting instruction in modern sciences and knowledge. He also said that no programme of national education can be appropriate if it does not give full consideration to the education and advancement of one-half of the society – that is the women.

He is also responsible in establishing most of the major cultural and literary academies we have today, including the Sangeet Natak Academy, Lalit Kala Academy, Sahitya Academy as well as the Indian Council for Cultural Relations. The first IIT, IISc, School of Planning and Architecture and the University Grants Commission were established under his tenure.

Maulana was an eminent scholar of Urdu, Persian and Arabic. He also advocated the retention of English language for educational advantages. He also believed that primary education should be imparted in the mother-tongue. #KhabarLive