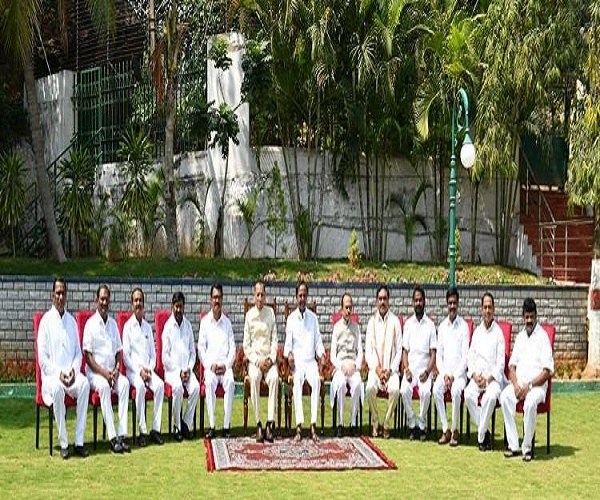 The Telangana government finally got its expanded cabinet on Tuesday, with 10 ministers taking oath. Only a two-member cabinet was sworn soon after the government was elected on December 11, 2018. However, between Telangana’s government’s previous and current cabinet, one thing remains constant — the conspicuous absence of women.

The lack of women in the TRS party itself has been criticised previously, but, as it goes on to show, isn’t a concern for the party. The TRS had even reduced the number of tickets to women in the 2018 elections. Just four women had been given tickets, out of which three won — former Speaker Padma Devender Reddy, Ajmera Rekha and G Sunitha Reddy. It remains to be seen if Telangana will induct a woman into the cabinet during later expansions. Padma Devender Reddy held the highest post given to a woman in the previous cabinet.

Following the swearing-in, former Deputy Chief Minister Kadiyam Srihari told reporters that the next expansion would have a woman, and a legislator from the ST community.

And while the party may claim that they may give a cabinet berth to a woman during the expansion, one event encapsulates the TRS’ attitude towards women best — when newly inducted Jagadish Reddy was asked about the lack of women in the cabinet, his kneejerk response was “Intlo unnaru kada” (They’re at home), before retracting and changing it to “Women are our backbone”.

According to TRS sources, the delay in the expansion of the cabinet was due to a bureaucratic reorganisation exercise undertaken by Chief Minister K Chandrasekhar Rao to club departments and responsibilities under each ministry. #KhabarLive