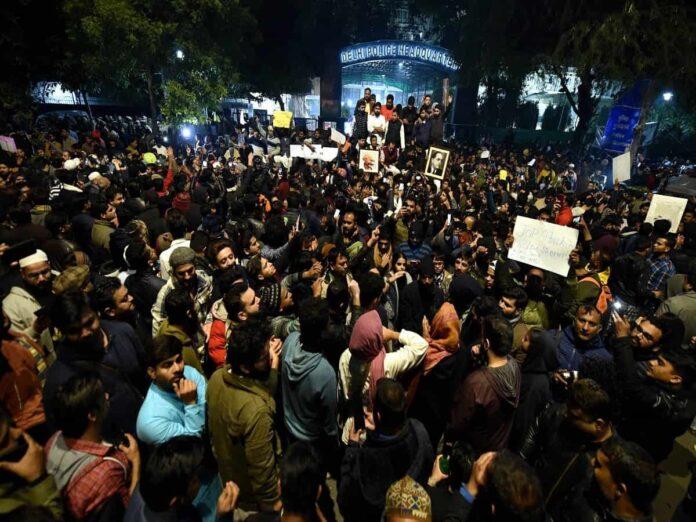 Recently, Hyderabad police detained and booked cases against four minors who were part of anti-CAA protests. The two boys and two girls were among the 28 persons detained by the police – and according to activists who were present at the scene, and family members, one of the boys was assaulted by civilians with the full knowledge of the police. All four minors were kept at the station, which is against the Juvenile Justice Law in the country, the activists said.

Shahanaaz, the mother of the two girls aged 14 and 16, who were detained by the police on the night of February 8, tells #KhabarLive that her daughters were taken to the Central Crime Station (CCS) police station at Goshamahal, and were wrongfully confined at the police station until the morning of February 9.

“The police have booked both my daughters under five sections – the same sections that the adults were booked under. I told them that they can’t keep my daughters at the station the whole night,” Shahnaaz says, adding that the police did not give a reason as to why the minors were being booked in cases along with the adults. “There was another girl there who had just turned 18,” Shanaaz adds.

“My daughters didn’t sign the notice seeking their presence at the police station, I signed it on their behalf. But my daughters were let off only in the morning. The police has now asked me to come to the Habeeb Nagar police station on February 14 with my identification cards,” she adds.

Under the Section 10 of the Juvenile Justice (Care and Protection of Children) Act, 2015 the police can arrest or detain a child found violating the law – but the child has to be placed under the care of a special juvenile police unit, or an officer designated as a child welfare police officer. The designated officer also has to produce the child before the Juvenile Justice Board within 24 hours, and the child cannot be held in a lock-up nor can she be sent to jail. The mother of the two minor girls told #KhabarLive that neither she nor her children met with any officials as mandated under the JJ Act.

Police have registered cases under IPC sections 147 (rioting), 341 (wrongful restraint), 353 (assaulting a public servant), 188 (disobedience) read along with section 149 (unlawful assembly), and section 3 of the Prevention of Damage to Public Property Act that deals with mischief. All four minors have also been booked under these sections along with the adults.

The Hyderabad police also took two minor boys into custody – and one of them, a regular at anti CAA and anti NRC protests, was allegedly assaulted by Mythri committee members with the knowledge of the police.

One of the protest organisers, Shiba told #KhabarLive that while all protestors were taken in a bus to the CCS at Goshamahal, one of the boys was taken separately in an Innova car. “Four men in civil dress hit the boy. His face had turned red due to the beatings,” says Shiba who was detained in the bus and saw the boy being taken in an Innova car by four unidentified men, “We kept asking the police who those men were and what department they were from. The police said they were civilians from Mythri committees who help the police manage crowds.”

Mythri committees formed under each police station limits are to act as a bridge between the police and the community. “But do these people from Mythri committees have the authorization to pick up a minor and beat him? The police stopped the bus at Goshamahal before entering the station and the Innova car dropped off the injured boy. The minor was then made to enter the bus where everyone else was detained. It was to make it look like he was on the bus the whole time,” Shiba alleges.

“The minor boy was selectively targeted as he is regular at the protests, we think the police are trying to intimidate everybody who is regular to the protests,” alleges Shiba.

A total of ten female protestors were detained by the police that night. Under section 46(4) of the Code of Criminal Procedure that is to be followed by the police, women cannot be arrested after sunset and before sunrise. If an arrest has to be made, it has to be only under exceptional circumstances, and a woman police official should make a written report and obtain prior permission from a First Class Judicial Magistrate. None of these procedures was followed by the Hyderabad police on the night of February 8, say the women protestors.

“They did not interrogate us at the station, they just left us there but took our phone numbers. They asked for our identification proof, specifically for our Aadhaar numbers, but I didn’t give it to them,” says Shahanaaz.

“This is not the first protest my daughters have taken part in a protest, they also took part in the crystal gardens protest along with two of their friends who are also minors,” Shahanaaz alleges.

“The police seem to want to psychologically intimidate children. If the police themselves do such things, then who will we go and complain to?” asks the mother of two.

ALSO READ:  Why Jagan Should Not Fall In KCR's Trap?

Flash protests began in Hyderabad ever since the police stopped giving permissions to hold protests against the CAA, NPR and the NRC. Those organising the protests since December 2019 allege that the Hyderabad police have now begun tapping their phones and are sending police in plain clothes to monitor their activities.

“The police are following me in civilian dress or safari suits, they come in pairs,” alleges Shiba, “It started a week after I was first arrested in January, it’s intimidating.”

The Hyderabad police apart from taking photographs and making videos of the protestors are also collecting the name, number, address of the protestors. The police are particular about asking for the Aadhaar card details of those detained at the protests. Some resist giving their Aadhaar numbers but most end up sharing the information with the police. “The police are insisting on Aadhaar card, they are saying they need to check if the information we have provided is accurate and need to verify,” says the activist. While most women refused to share their Aadhaar numbers, the men were forced to part with this data.

Srinivas Kodali, an independent researcher on Aadhaar and Open Data told #KhabarLive, “The collection of Aadhaar by Hyderabad police from the protesters is to monitor their actions and movements. The police have been using facial recognition on the entire population of the city already. It is already using facial recognition to identify places where a large density of crowd exists. All of this without a surveillance law is illegal, but with no one demanding accountability, it keeps continuing.”

We have tried to contacting the Hyderabad police for their response and version on this allegations but they were unresponsive. #KhabarLive