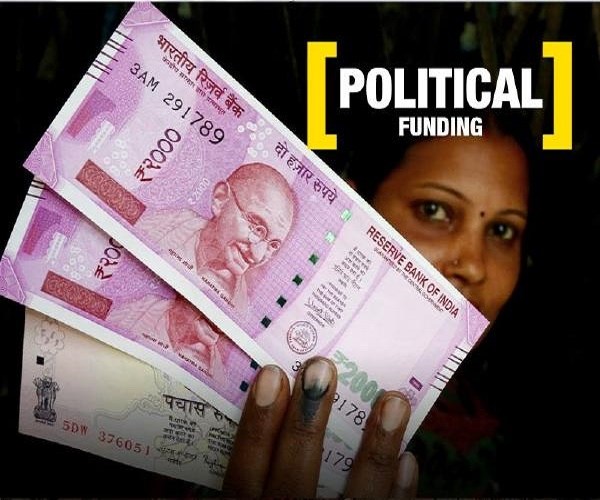 A democracy cannot have multiple standards of transparency. But in India that exists widely and is practiced religiously. It is difficult to even imagine that a government, which forced crores of fellow Indians to stand in long queues to prove their integrity during demonetisation, cannot prod the country’s most responsible class to come clean on their businesses. Politicians in India not only enjoy VIP status, but even the finances of their parties savour VVIP status of non-transparency.

In a nation where the government is hell-bent on monitoring all financial operations of a corporate and a commoner, political contributions are the only transactions incentivised for their murkiness.

The much-hyped electoral bond is another smart incentive to preserve the opacity in political funding in India. While claiming to cleanse the political funding, the government has, in fact, invented a special currency to be used for political contributions.

Political funds are not controversial because they are dealt in cash. Even in the middle of demonetisation in 2016, political parties were allowed to accept contributions of Rs 2,000 in cash. This rule continues till date. Political contributions are muddy because we never know the identity of the contributor. The electoral bonds (that can be bought from specified branches of SBI in multiples of Rs 1,000, Rs 10,000, Rs 1 lakh, Rs 10 lakh or Rs 1 crore) will not carry the name of the donor/s. Thus, the legal banking system will only be used to facilitate the entirely obscure and unlawful transaction.

To get to know about what has necessitated the invention of a new currency or electoral bond, one has to traverse through the list of unusual incentives political parties relish in India.

• For the first time In India, the Vajpayee government had conferred a “VIP” status to political contributions under the law of income tax. Companies were allowed to declare political contributions as expenditure, claiming a tax rebate on the same, while political parties are fully exempted from taxes. According to data collated by the Association for Democratic Rights, between 2012 and 2016, corporate donors contributed 85 per cent of funding (Rs 956.77 crore) to top five political parties. This transaction was by and large tax-free.

• Despite a crackdown on cash during note ban, the political parties were allowed to receive cash donations of small (up to Rs 2,000) amounts.

The amendments to the Finance Bill 2017 removed: (i) The limit of 7.5 per cent of net profit of the last three financial years, for contributions that a company may make to political parties. (ii) The requirement of a company to disclose the name of the political party to which a contribution has been made.

• With this change, the companies were allowed to offer, and political parties receive unlimited corporate funding without any obligation to transparency.

Were these incentives not enough to facilitate political funding? What has prompted the government to come up with electoral bonds?

The fact of the matter is that despite several concessions, it was not easy to make fat cash donations. With the help of electoral bonds, the big cash contributions will land in political accounts through the banking channel while the identities of donors will only be known to the political parties. No surprises if black money travels to political accounts via electoral coupons, purchased from the bank with forged identities (KYC).

It is time to pose some straight questions to the government:

1) Why should political contributions get a double (company and political party) tax exemption? What charity is being served with this funding?

2) What is the harm in telling the country who is paying how much to which party?

Now, we are required to be extremely strict with our politicians, or else we have to accept that whichever party is in power and howsoever popular the leader is, this darkness will never end.

It is one thing for governments to promise transparency — and another thing to deliver it.

With the government itself apparently coming in the way of transparency by asking, “Why should the voter know the source of political funding?”, all hopes were pinned on the Supreme Court vis-à-vis the opaqueness surrounding the electoral bond scheme for funding of political parties.

On April 12, the Supreme Court said all political parties must furnish receipts of political funding received through electoral bonds and details of the identity of donors to the Election Commission.

But hold your excitement!

The court has directed that this information be submitted — in a sealed cover — which means the public doesn’t get to know the details. In the interim order, the apex court also directed all political parties to provide details of the amount of the bond and bank account of donors by May 30 to the poll panel.

The apex court said it would examine in detail changes made in Income Tax law, electoral law and banking laws to make them in consonance with the electoral bond scheme and ensure the balance does not tilt in favour of any political party.

By the time this ‘balancing act’ is done though, a new government would be in power. But voters will not know who funded the party they voted for.

The government’s submissions before the Supreme Court meanwhile are shocking.

Attorney General KK Venugopal on April 11 reportedly told the court, “Transparency cannot be the mantra” and “My opinion is voters have the right to know about their candidates… why should they know where the money of political parties is coming from?”

For a government that made people stand in queues for days outside ATMs to claim their own money this questioning of a voter’s right to vital information is indeed shocking.

In his submissions before the bench of Chief Justice of India Ranjan Gogoi and Justices Deepak Gupta and Sanjeev Khanna, the AG, while addressing a question on the need for transparency in political funding, reportedly said that the “realities of the day” have to be taken into account and “it can’t be applied without appreciating the particular problem”.

Perhaps the voter could at least be informed about the “realities of the day” — and under what realities a voter can be denied her/his right to information?

The AG had told the court earlier that since there is no state funding of elections, parties need money. Can the need for funds be the ground for any citizen or organisation being allowed to not disclose where they earn their money from?

Venugopal said the reason to protect donors under the electoral bond scheme from disclosing their identity was because donors feared victimisation by political parties to whom they had not contributed.

But the collective responsibility for this lies with the political class — and on the ground that their own politics has become a threat to donors, they cannot deny the citizen’s right to know.

The only way to counter black money is transparency.

If transparency is compromised, the floodgates to pumping black money into the system remain open.

The AG told the court that the identity of the donor is not completely hidden because it is disclosed to banks via KYC — yet, this still does not ensure that people know where the party they want to vote for is getting its money. Also, if bonds are bought through shell companies, we would not know where the money actually came from.

In the name of transparency, we often have tax notices being sent to innocent citizens.

Why shouldn’t the same rule apply to political parties?

Political parties are increasing poll expenditure, despite the tabs introduced on this, and in order to fund it, they are asking the voters to not question them.

If political victimisation scares people from contributing for parties, then so be it. It will help move one step closer to creating a level playing field — and letting people without money also participate in the electoral battle. #KhabarLive