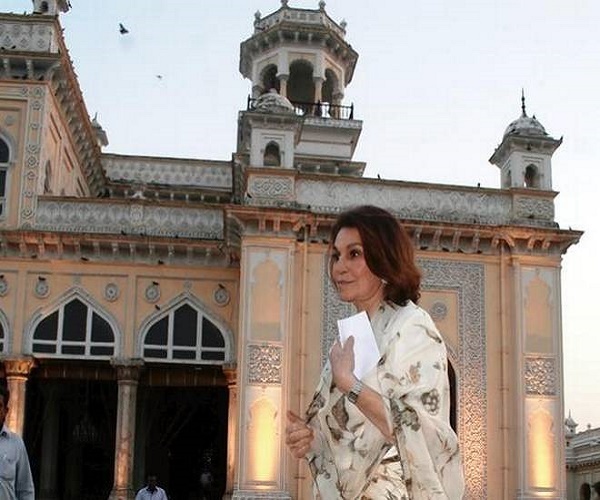 Make them Deccan showpieces, says 8th Nizam’s former wife. Some of the fabulous jewels of the Nizams of Hyderabad were brought and showcased at the Salar Jung Museum for a few days in 2001 and then in 2006. Now, Princess Esra, former wife of the VIII Nizam Mukkarram Jah Bahadur, wants the jewellery housed in Hyderabad on a permanent basis.

“The world knows only two crown jewels; those of Iran and England. The Nizam’s jewellery is a fantastic collection and it should be housed in Hyderabad on a permanent basis. This book shows how the lives of royalty were inextricably linked to the jewellery and to the craftsmanship of the land,” says Princess Esra pointing at a book titled ‘Treasures of the Deccan – Jewels of the Nizam’.

Research on jewels
The book, an eight-year research effort between jewellery historian Usha Bala Krishnan and photography archivist Deepthi Sasidharan, ties up the pieces locked up in Reserve Bank of India vaults with sepia-tinted photographs clicked by firms of Bourne & Shephard and Raja Deen Dayal.

ALSO READ:  Inside Hyderabad’s Quest For A Less-Polluting 'Elephant God Of Ganesha'

“I got the idea of matching the photographs with the jewellery while documenting them at the Chowmahalla Palace and I reached out to Usha who had already done the research on the jewellery,” says Ms. Sasidharan.

It was during the research that the duo managed to identify a royal woman by name, thanks to an inventory of her jewellery. “When I was cataloguing the jewels of the Nizam for the government of India, I came across a trust deed with two entire sets of jewellery as belonging to one Iqbal Begum and another Gauhar Begum who were wives of Mir Osman Ali Khan. And Deepthi came across the photograph of a woman wearing the exact set of jewellery described in the trust deed. We could identify Iqbal Begum with the emerald taviz (amulet) she has as her armband,” says Ms. Krishnan.

Scattered treasure
The jewels of Nizam are part of a horde of treasure that got scattered after the Police Action in 1948, which led to the accession of Nizam’s Dominion into India. Just Jacob’s diamond (earlier known as Imperial diamond) acquired under duress by the Nizam VI Mir Mahbub Ali Khan is a 184.75 carat ripe strawberry sized flawless cushion cut white of South African provenance.

Valuation
Justice A. N. Sen (retd.), appointed Umpire in the Nizam Jewellery arbitration proceedings, had valued the jewellery at ₹225,37,33,959 on July 27, 1991, but the Supreme Court lowered the amount citing arithmetic error. An international auction house had valued the same jewellery at a staggering ₹1,192.32 crore.

Some of the jewellery pieces are stunning works of craftsmanship that reflect the local idiom which evolved in a region where diamonds were first mined. The South Africa and Brazilian kimberlite mines were discovered much later in the middle of the eighteenth century.

“Visitors go to see the crown jewels in London and are filled with wonder. Indian visitors try to have a search for the Kohinoor diamond there. The Nizam’s jewellery is in a different league. They show a beautiful blend of Deccan taste, craftsmanship, choice of colour and sense of style.

If these jewels are brought to Hyderabad where many of them were created and worn by royalty, it will be an honour for the city and the country. Who keeps jewellery locked away?” says a passionate Princess Esra, who has single-handedly transformed the Falaknuma Palace and Chowmahalla Palace into must-visit places in the State capital over the past 10 years. #KhabarLive