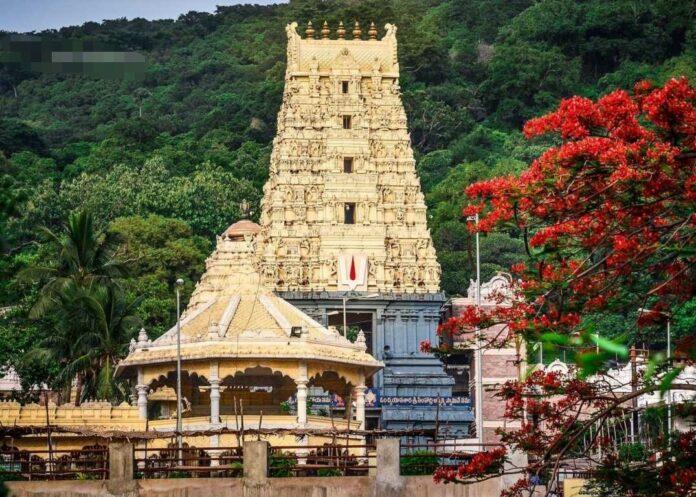 The controversy in the Simhachalam Varaha Lakshmi Narasimha Swamy Devasthanam Trust threatens to grow into a political issue in Andhra Pradesh.

At the centre of the storm is a State Government order dated 3 March.

Through the order, Sanchaita Gajapati Raju has replaced Ashok as the chairman of the Simhachalam Sri Varaha Lakshmi Narasimha Swamy Devasthanam Trust and MANSAS (Maharaja Alak Narayan Society of Arts and Science) Trust Board.

Sanchita is the daughter of late Anand Gajapathi Raju, Ashok’s elder brother who died in 2016.

Anand, who was first with the Congress and then the TDP, headed the trust from 1994 until his death.

Sanchaita’s appointment, a shrewd move to replace Ashok, has brought to limelight the infighting in the erstwhile royal family of the Gajapathis in Vizianagaram, a sleepy town 60 km from Visakhapatnam.

The Simhachalam Varaha Lakshmi Narasimha Swamy Devasthanam Trust runs the Simhachalam or Simhadri temple, which is 18 km from Visakhapatnam and dedicated to the Narasimha avatar of Lord Vishnu.

MANSAS was set up on 12 November 1958 by the last Maharaja of Vizianagaram P V G Raju by donating vast tracts of land in memory of his father Maharaja Alak Narayan Gajapathi Raju to promote education and continue administration of educational institutions under the patronage of the royal family.

The trust, set up with 13,000 acres and other properties, provides financial support to at least 12 educational institutions.

What has raised hackles of Reddy’s opponents is the haste with which Sanchaita was sworn in as the chairperson of both trusts. Even the BJP has questioned why she should be sworn in within 24 hours of the government order being issued.

The Andhra Pradesh Government had reconstituted the Simhachalam Temple trust’s board on 2 February and the members were scheduled to be sworn in on 29 February.

The event, for which Ashok was invited, was cancelled at the eleventh hour and then the State Government came up with the order on 3 March appointing Sanchaita as the chairperson.

The main bone of contention, however, is the locus standi of Sanchaita, born to the late Anand and Uma Gajapathy Raju. The couple, who had two girls, divorced in 1991 and Uma married filmmaker Ramesh Sharma.

Anand later married Sudha and a daughter was born from this wedlock.

Born in Hyderabad and schooled in Delhi, Sanchaita was brought up by Uma. Anand visited her till 1996 after which poor health did not permit him to meet her.

Anand’s second marriage limited Sachaita’s access to him, though he told her that his blessing would always be with him. Though both met a couple of times, unpleasant developments took place with his extended family.

Since Anand’s death the gulf between his and Ashok’s family has only widened.

Sanchaita says she faced the worst after Anand passed away in 2016, when she wasn’t even allowed to stay in the house. Ashok, though, has a different version.

The former union minister says there was no space for Sanchaita in the house and they had made arrangements for her stay at the residence of a family friend.

What helped Reddy appoint Sanchaita was that she was the only one who could have replaced Ashok as traditionally the eldest legal heir of the family heads these trust since 1713 when the Simhadri temple trust was set up.

The Andhra Pradesh Chief Minister took advantage of a letter to him from Sanchaita claiming her right. “I applied saying that as the eldest legal heir of my father, I have the right to be a part of these organisations. Should not a woman render service?,” she asked the media.

Ashok, who has headed the trust after Anand’s death in 2016, contends this saying his father PVG Raju’s wish was that only a male heir should head the trusts. Sanchaita argues that her grandfather was always committed to women’s empowerment.

On his part, Ashok has alleged that Sanchaita is not a Hindu and belongs to some other religion. His supporters have posted a photo which shows her standing in front of Mother Mary statue in the Vatican city.

Those backing Sanchaita have shared her social media posts of her temple visits or wishing people on Diwali or Dussehra to prove that she is a practicing Hindu. They have also shared images of Ashok celebrating Christmas to question his Hindu credentials.

“I am the daughter of Uma Gajapathi Raju and Ananda Gajapathi Raju. They are both Hindus. Yes, I go to churches. I may go to other religious places. I would like to ask my uncle, hasn’t he ever visited a Gurudwara, mosque or a church? He visited them several times and clicked photos. Does it mean he is not a Hindu?” wondered Sanchaita in interviews to the media.

Ashok says the Andhra Pradesh government’s intervention into the Trust affairs is not welcome. He has alleged that there is a far more bigger objective in removing him as the chairman of the trusts without even serving him a notice.

He argues that valuable lands under the trust’s holding are at risk and alleges that efforts are on to corner them.

Sanchaita is critical of the stand of the Opposition parties. “Do you know over 60 per cent of the students in MANSAS-run educational institutions are girls? I am very disappointed when a few individuals from a particular political party ask these kinds of questions,” she asks.

To compound her woes, the State BJP unit has sent a report to national general secretary (organisation) BL Santosh.

Meanwhile, Ashok’s family has filed a case in the court against the Sanchaita’s appointment and has sought a stay.

For Reddy, the feud within the Vizianagaram royal family has not only helped him to embarrass the Opposition but also show the State BJP in poor light besides further driving the wedge in the Gajapathi family. #KhabarLive