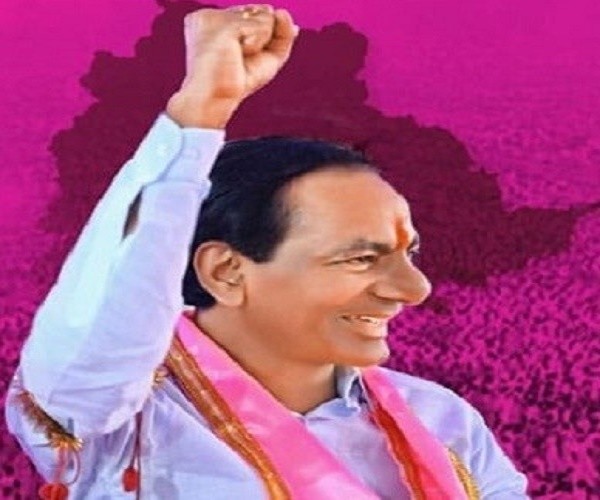 The Telangana Rashtra Samithi (TRS) president K Chandrashekar Rao, having been elected as its Legislature Party Leader unanimously, sworn-in as Chief Minister of Telangana for a second term at Rajbhavan, Hyderabad. Governor ESL Narasimhan administered the oath of office and secrecy to Chandrashekar Rao in a simple but enthusiastic ceremony attended by senior officials and non-officials.

Earlier, two days ago, the ruling TRS led by its president and Chief Minister K Chandrashekar Rao, riding high on a series of welfare measures and development schemes, initiated and successfully implemented during the 51 months of governance in his first term, retained power by securing a landslide victory in the State Legislative Assembly elections held in December 7. Both the Congress, with its grand alliance, and the BJP that rules majority of Indian States, which claim alternatives to one another in the national political scenario, had to be contented with fewer seats that they could hardly manage to secure.

The TRS led by Chandrashekhar Rao steamrolled the Opposition to capture the Telangana State Legislative Assembly for a second consecutive term with near three-fourths majority. Proving all exit polls utterly wrong, barring the India Today and ARAA survey, the TRS won 88 of the 119 constituencies, the Congress tally was a mere 19 and that of the TDP just 2. While the BJP could get just one seat, the rest including the CPI and the CPM drew blank. The MIM of Asaduddin Owaisi, a friendly party of the TRS, retained its seven seats. Two independents later joined the TRS making its total strength 90.

The results sent clear signals that a slew of welfare measures like Rythu Bandhu, Rythu Bhima, Kalyana Lakshmi, Shaadi Mubarak, Aasara pensions and various other welfare measures benefiting women, minorities, BCs, SCs and STs introduced by the TRS government, were received well by the people and turned out to be a vote bank for the TRS. The unprecedented mandate is the result of the people’s all-round support for a productive government as opposed to the negative politics of the opposition, mainly the Congress and the TDP. The two parties ceaselessly sought to derail the development process in Telangana State through umpteen court cases and representations to the Union government to stall irrigation projects.

The excellent results in favour of the TRS came in spite of hectic campaigning by Prime Minister Narendra Modi, BJP president Amit Shah and Union Ministers Rajnath Singh, Smriti Irani, JP Nadda and UP Chief Minister Yogi Aditya Nath and score of others in favour of the BJP; Rahul Gandhi and Sonia Gandhi as well as a number of top Congress leaders and AP CM Chandrababu Naidu and his TDP coterie in favour of Grand Alliance. In fact, the TRS did exceedingly well in the districts where these so-called stalwarts campaigned extensively in the three weeks prior to polling.

As Chandrashekar Rao declared after the electoral success, this is certainly the “victory of the Telangana people.” “Farmers, women, Dalits, Girijans and various sections of the people all have given this victory to us,” Chandrashekar Rao said at a press conference after the results. Chandrashekar Rao further said, “It is the people’s victory, and we accept it with all humility. With the huge mandate comes greater responsibility to deliver on our promises.”

Consequent to his party’s landslide and resounding victory, Chandrashekar Rao in the press conference which he addressed in the party headquarters, the Telangana Bhavan, made no secret of his determination to emerge as a key person in the national political scenario. Chandrashekar Rao declared that “There emerges a new national political party in the country very soon, which will be a consortium of regional parties. It will not be an attempt at uniting political parties. We are going to unite the polity of India, and the people of the country.” Chandrashekar Rao further added that the massive TRS victory in Telangana is an endorsement of the innovative policies and programmes it had launched during its four-and-half year rule.

The Chief Minister pointed out that there are about 15 crore farmers in the country who are in distress, and hence there is a need for a new national economic model. The Chief Minister cited the experiment of the TRS government in Telangana which had shown the way for tackling the agrarian crisis which were appreciated by many experts including Dr MS Swaminathan.

The Chief Minister is of the opinion that his proposed new national party, the Federal Front, which will be in the nature of a consortium of regional parties, when comes to power, would implement the Rythu Bandhu Scheme aimed at investment support for agriculture and farmer in the entire country. Chandrashekar Rao even spelt out the financial burden on this which will be just about 3.5 Lakh crores and the Union Budget very well permits this. Minority welfare, marketing agricultural produce, optimum utilisation of 70,000 TMC ft of water etc are some of the schemes proposed by Chandrashekar Rao to benefit one and all in the country.

“Hame ek Congress mukht aur BJP mukht Bharat chahiye (We need a Congress-free and BJP-free India),” KCR declared to media persons. Chandrashekar Rao promised to bring together all like-minded parties at the regional level in the country to form a viable alternative to both the BJP and the Congress to ensure a qualitative change in the country’s political scenario and in the process would give a new definition to national politics. By playing a crucial role in national politics, said Chandrashekar Rao, he would strive hard to put an end to the routine governance. The aim is to bring structural changes in the polity said Chandrashekar Rao.

Chandrashekar Rao further said that the need of the hour is to overcome the deep-rooted political crisis in the country and a complete overhaul in the economic, political and agricultural sectors where the country has been lagging behind many other countries. Chandrashekar Rao even proceeded further and declared that, “within next 10 days, the modalities of the national alternative would be announced in Delhi. A draft has already been prepared and a working model will be arrived at. This will be released in all Indian languages. The objective of national alternative, in the form of a federal front, is not a mere alignment of political parties, but unification of people which can be achieved only through a new economic and agricultural model using a new political system.”.

Chandrashekar Rao further said that he had already interacted with a cross section of people who included politicians, economists and numerous analysts to understand how a consortium of political parties could be developed. His concept of national alternative to both the BJP and the Congress would be open to all regional parties.

Chandrashekar Rao asserted that once he ensures that the new government settles down in the State, he would go to New Delhi to start working on national politics actively. Emphasising the need for India to tackle the arrogance and indifferent attitude of both the BJP and the Congress first, he felt that there are still four-five months’ time left before the general elections, which is sufficient to formulate an alternative. MIM leader and Hyderabad MP Asaduddin Owaisi along with him will play a crucial role in the formation of non-Congress and non-BJP alternative at the Centre.

The BJP is on the move to get defeated in the next general election and the Congress is certainly not going to replace it come what may. There is a crystal-clear political vacuum, as the present ruling coalition led by the BJP, and the so-called projected alternative, the Congress, cannot provide the momentum that India needs and needs very critically.

It’s time that the country needs a new direction as 70 years have passed since attaining independence and still, we are struggling for basic minimum needs. None of the national political parties, either the Congress or the BJP exhibited the mindset of out of the box thinking which the need of the hour is.

Hence Chandrashekar Rao’s action plan for a national alternative to both the Congress and the BJP is all the more relevant and triumphant Chandrashekar Rao shall play dynamic role in national politics. #KhabarLive