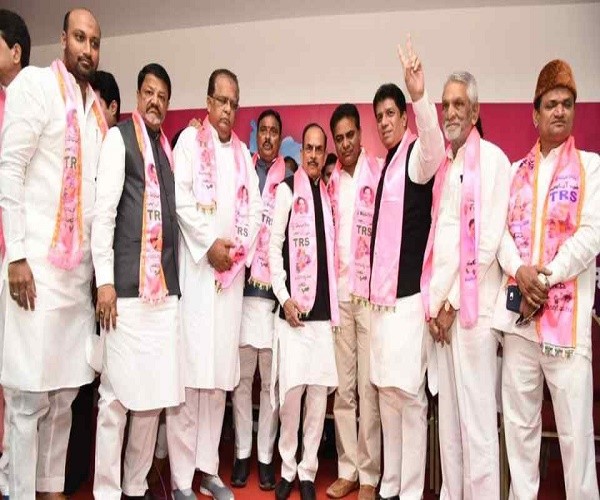 In poll-bound Telangana, several Congress leaders have resigned and crossed over to rival political parties in the last few days. Among the notable few who have left are Abid Rasool Khan, former chairman of State Minorities Commission and vice president of Telangana Congress, and Khaleequr Rahman, the National Coordinator of the All India Congress Committee (Minority Department). Both joined rival Telangana Rashtra Samithi (TRS) in the presence of KCR’s son K.T. Rama Rao and caretaker deputy CM Mohammad Mahmood Ali.

According to reports, former Congress MP and cricketer Azharuddin is also likely to abandon the party and join TRS. Later some time, he clarified as still he is in Congress party, somebody spread the rumour. Moreover, Congress leader Abdul Sattar has joined Hyderabad MP-led All India Majlis-e-Ittehad-ul Muslimeen (MIM) along with several supporters.

The primary reason for leaving Congress, many have said, is the “injustice to the minorities in allotment of seats” in the current assembly election. “Congress is not giving tickets to deserving Muslim candidates,” said Khan while talking to #KhabarLive at his residence here in the capital city. According to him, the party is giving tickets to those who have been defeated time and again, people with criminal background and little social standing. “Upright and deserving leaders have been sidelined in the party only to promote those who have criminal cases and are not committed to the core ideology of the party,” added Khan.

In his resignation letter to party president Rahul Gandhi, disgruntled Khan wrote, “Sir, you are an honest and secular leader but the party is controlled by Sanghis wearing khakhi within the party, which is to your knowledge.” Khan claimed that before leaving Congress, he wrote several letters to both state as well as national leaders but they remained unanswered.

Rahman, who joined TRS along with Khan wrote in his resignation letter to Gandhi: “I have realised that Muslims are becoming irrelevant in the party and the party would like to utilise them as the vote bank without giving them proper representation and importance.”

According to these two aggrieved leaders, Congress should have given at least 13-14 tickets to Muslims. So far, the party has only given tickets to seven Muslim candidates. Congress is contesting on 94 seats out of 119 seats as part of a grand alliance, Maha Kutami, which includes Andhra Pradesh’s ruling party Telugu Desam Party and Communist Party of India. What is interesting to note is that TRS, the party in which these disgruntled Muslim leaders have put their faith, have allocated an even lesser number of seats to Muslims. Out of 119 seats TRS is contesting, it has fielded just three Muslim candidates.

Shaikh Abdullah Sohail, chairman of Telangana Pradesh Congress Committee Minority Department, rubbished allegations against Congress. “The party has given tickets to almost double the number of Muslims in comparison of last assembly election,” he told #KhabarLive in a telephonic conversation. As per Sohail, while in the last election – 2014 – the party had given a ticket to only four Muslim candidates out of the 119 seats it contested, this time around, it has given seven out of 94. “The party wanted to give one more ticket to a Muslim (Mahboob Nagar seat) but could not because of the alliance,” he claimed. When asked about Khan’s allegation that Sohail has been involved in corruption and criminal activities, he responded: “If that is true, how come he had been dining with me and attending my family functions until he resigned from the party?”

“Unlike him, I am not a page-3 political activist. I have no political godfather,” Sohail said, adding: “It is true I am not an intellectual like him but whatever position I hold in the party today, that is because of my hard work over the years. I have worked for the party almost on all the levels, right from ward committee.”

When asked about Rahman, he said, “He is an all-rounder. Even while being in Congress, he used to hobnob with senior office bearers and sympathisers of different political parties, from TRS to BJP.” Sohail said Khan was asked by the party to contest from Karwan constituency in the Old City of Hyderabad against an incumbent MIM MLA but he refused. Khan confirmed to #KhabarLive that he was indeed offered a ticket from Old City area but he did not take up the offer because he felt that he was being made a scapegoat. “I told the party that I am ready to contest from the Old City provided other big leaders like Mohammad Ali Shabbir are also ready to contest from the area,” he told #KhabarLive, adding, “when it was not done by the party, then I refused.”

Khan is widely believed to be a person with good intention. Several people #KhabarLive spoke to praised his tenure (2013-17) as chairman of State Minorities Commission. However, none of them said that he had the capacity to win an election. A journalist who has known him for two decades said on the condition of anonymity, “He is a nice man but has hardly any following in the community, forget about winning an election.” S.Q. Masood, an activist working amongst Muslims of Hyderabad, echoed the journalist’s opinion. When asked whether these resignations are going to affect Congress’s Muslim vote, he said: “No, because these leaders hardly have any mass following.”

Commenting on the lack of representation of Muslims in Telangana assembly, senior journalist Mir Ayub Ali Khan said, “The real problem lies outside Hyderabad while Muslim leadership is concentrated in Hyderabad.” According to him, there are several constituencies outside the city where a Muslim candidate can comfortably win, but over there Muslim leadership is hardly promoted by any party, including Congress.

“What is needed is the promotion of local Muslim leadership in those constituencies that are well-connected with the masses. Only then the representation will increase, otherwise, Muslims from different political parties will be fighting on select seats,” opined Khan, who was till recently associated with the Times of India. He also said that the resignation and crossover is unlikely to impact Congress vote share as these leaders hardly have a base and following. #KhabarLive