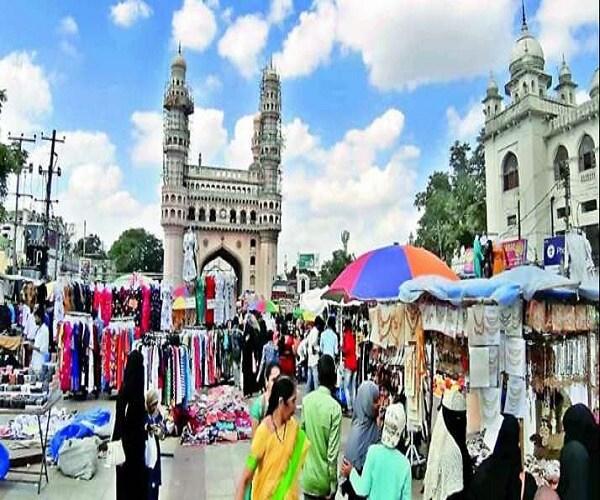 Since a long time, the Hawkers and vendors in twin cities of Hyderabad and Secunderabad alleged that they are being harassed by civic and law enforcement authorities as the Telangana government has not yet implemented the Street Vendors Act, 2014.

Mohd Sajid sits right at the entrance of the large arch that welcomes citizens to the Secunderabad railway station. As he cuts up watermelon swiftly and serves the fruit to customers walking in and out of the station, he constantly glances at his watch, aware of every passing minute.

“They (the police) have given me strict timings. I’m allowed to be here for two hours in the morning, then from 1 to 4 pm and again from 9 to 11 pm. Though it’s not an official order, if I don’t follow it they will book a petty case against me,” he says.

Sajid says there is a challan of around Rs 1,000 and also possible jail time if he violates the police’s oral timings.

“If we get caught, they open a sheet against us. Many vendors suffer due to this. Because of this, it gets difficult to get a No Objection Certificate (NOC) if we go looking for jobs elsewhere,” he says.

Despite being a vendor for the last 19 years, Sajid is yet to be given an official identity card by the government, though it has been many months since he applied for one.

A little ahead, Javed Mohd, a cobbler who sits by the street, says that he has a card but is still not safe. He and Sunitha, a flower vendor who sits close by, echo the same thought.

“The police deliberately ask us to leave sometimes, because some ‘sir’ is coming. Even though I follow the timings that they give me, I am forced to shut my business for a few hours randomly,” Sunitha says.

“Every time a senior official comes, I’m asked to vacate and run. Why should I run? Am I thief? I’m just trying to eke out a living,” Javed says.

Hawkers and vendors in Hyderabad say that this happens because the Telangana government has failed to implement the Street Vendors (Protection of Livelihood and Regulation of Street Vending) Act, 2014.

“The Street Vendors Act was passed in Parliament around the same time as the AP Reorganisation Act but it is not being implemented properly on the ground. While a notification was issued in 2016, to notify the scheme of the Act for the state, there are many discrepancies,” says James John, the Greater Hyderabad General Secretary of the National Association of Street Vendors of India (NASVI).

John says that as per the Act, a Town Vending Committee (TVC) has to be appointed with representatives from various government departments, including the Greater Hyderabad Municipal Corporation (GHMC) and the police, besides members of hawkers’ associations.

“Elections for the posts are supposed to be held democratically, but we have instead been nominated so that the authorities can tell the Centre that they are following the Act, at least on paper,” says John, who is a member of the TVC.

“Surveys are supposed to be conducted periodically, and vending zones are to be demarcated. Time slots also have to be allotted by the TVC officially. But none of this happens properly. As a result, the local police issue oral orders and set the timings as per their convenience,” he adds.

This has led to vendors facing uncertainty and fear, in some cases, even if they have been issued an ID card.

“My stall was earlier there,” says Srinivas, pointing to a pillar close to the Secunderabad West metro station, near Alpha Bakery. “I was shifted here during the construction and I’m running my stall here.”

“Even if I wish to go away for two days and come back, there is no guarantee. We live day to day,” he adds.

The GHMC is currently working to set up vending zones across the city. At Begumpet circle, for example, officials are mulling zones across areas like Alpha Hotel to Old Gandhi Crossroad and Solapur Sweet House to the old Market Police Station. However, GHMC may likely declare the area just outside the Secunderabad station as a ‘red zone’ where no vending can take place.

“This would render many of us jobless. Vendors have to be situated where the people are. The zones are also supposed to be proposed only after consultation with the TVC, which is also not being done as per the guidelines,” John says.

The vendors also allege that the police arbitrarily evict several of them from time to time.

In December last year, after a representation by the vendors, Telangana Mission for Elimination of Poverty in Municipal Areas (TSMEPMA) Director TK Sreedevi wrote to the GHMC Commissioner stating that no street vendor should be evicted or relocated until a survey is completed.

A letter was also circulated to officials of all states by Sanjay Kumar, Joint Secretary with the Ministry of Housing and Urban Affairs, in February last year, which stated, “It needs no emphasis that the street vendors belong to the urban poor category. The Act was passed to protect their rights of earning livelihoods and prevention of harassment by the police and authorities.”

Venkat Mohan, state president of the Telangana Street Vendors and Hawkers Trade Union, who had submitted the representation to TSMEPMA says that the rights of the vendors are clearly defined in Section 3(3) of the Street Vendors Act, which deals with ‘Survey of street vendors and protection from eviction or relocation’.

“ID cards should be issued along with a certificate of vending. Until then, they should not be relocated. The Act is very clear on this. The authorities are not clear on the law. They are not running things by the TVC and issuing notices,” he says.

“Though the Act was passed in 2014, it hasn’t percolated to the ground. There is a need to educate vendors on this. A detailed survey has to be carried out and only then can officials proceed,” Venkat adds.