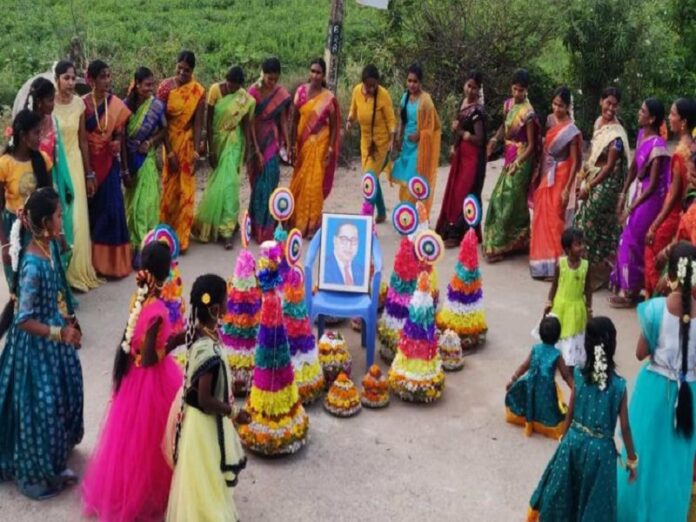 Examining the rationality of the different claims surrounding the history of the festival is futile, but beneath it, is a larger question. Whose culture is it?

Bathukamma Bathukamma, Valalo Bathukaagamaaye, Valalo…Vaadala Bathukamma Valalo Medala Paalaye, Valalo..(Dear Bathukamma, your life has been left in chaos. The Bathukamma of the streets is now in forts and mansions). These lines are from a song written and composed by popular Dalit singer Apoori Somanna and explain what he calls a cultural onslaught in contemporary times against Bathukamma, a popular festival of flowers in Telangana that usually takes place between the second half of September and the first half of October.

Early human societies architectured certain cultural practices that were not codified. It was later in human history that authority emerged in the guise of religion and other associated forms. Many aboriginal, peasant communities, despite threats of dominance and colonisation, have succeeded in maintaining their indigenous cultural practices across the globe, and the same can be said for Bathukamma.

An undetachable bond with flowers, nature and music is the focus of the Bathukamma celebration around production. Bathukamma is celebrated by making a hill-shaped arrangement of different coloured flowers along with turmeric powder and kumkuma. Women dance around the arrangements in a circular or semi-circular pattern, clapping continuously in a rhythmic fashion, breathing life into the songs. On the ninth day of the celebrations, they drop their respective flower arrangements/Bathukammas in a lake or water body of the village, followed by a feast at the shore.

Telangana’s production castes (communities who are in the agriculture) and mainly those categorised as Backward Classes (BCs), have traditionally celebrated the festival. Till some time ago, Dalit women in some places celebrated it separately or were not allowed to celebrate it even in their own settlements. Though the situation has changed to some extent after the formation of Telangana, as it was declared as a state festival, we still see sporadic incidents of Dalits being shunned when they attempt to participate in the festival in the public sphere.

This year, however, there has been a fundamental change. A group of Brahmin priests under the banner of the “Vidwat Sabha” intervened to decide the dates of the celebration, paving way to a new ‘method’, as until now, the dates were not decided by priests. This bid is nothing but an attempt to appropriate, if not hijack, the culture of peasant castes and especially women.

Examining the rationality of the different claims surrounding the history of the festival is a futile exercise, but beneath it, is a larger philosophical and political question. Whose culture is it?

Unlike other mainstream religious festivals or celebrations, Bathukamma is unique as it celebrates life by the arrangement of a variety of flowers. Some of the popular narratives, by way of songs, suggest that it was started in the reign of the Kakatiya dynasty while others claim that Bathukamma was a gift by goddess Lakshmi Devi to a Chola king, Dharmanga, after the death of his 100 sons. Some songs, which are sung at the time of the celebrations, are in praise of goddess Parvathi or Varalakshmi.

These songs keep changing and differ from place to place based on the popular history in the region. Vedic chants or words such as ‘muhurtam’ (auspicious time) are not heard in the celebrations as the people celebrate as per their convenience.

Historically, it has been the elite class who have controlled the cultural narrative. The stories of those below them in the hierarchy were not told, heard or documented because it was prohibited. Many elderly Dalit people claim that the Bathukamma celebration was historically part of the culture of their ancestors and that it was somehow taken away from them.

One of the ways in which this was done, they say, was through stories. One folk story involves pieces of roasted beef, a crow and a Madiga (Dalit sub-caste) woman who was working as a vetti labourer (bonded labour) at a fort owned by a feudal lord. According to this story, the Madiga woman, who was well-known for her nuance in singing, was stealing the show at every Bathukamma festival.

Disgruntled by her presence, some (dominant castes) waited for an opportunity to prohibit her from the gathering. On one occasion, the Madiga woman is said to have rushed from bonded work at the fort to the Bathukamma celebration while carrying roasted beef pieces. As the celebration was set to begin, a crow came flying and knocked down the woman’s Bathukamma, before fleeing with a piece of beef.

The village resolved that the Madiga woman and her fellow women should not take part in the celebration in the future, claiming that the incident was the sign of a curse from goddess Bathukamma. From then on, Dalit women never reclaimed their right over Bathukamma. Or so, the story goes.

Prof Kancha Ilaiah, a prominent social scientist who comes from a shepherd community in Telangana, observed in his book Why I am not a Hindu, “The violent, hegemonic, brahminical culture sought to destroy Dalit Bahujan productive structure, culture, economy and its positive political institutions. Everything was attacked and undermined.” In Bathukamma’s case, the Dalit-Bahujan culture has been hijacked, and is being given a colour which is strange to the traditional practice, in the interests of dominat sections.

Whether one accepts or dumps the legends, citing academic reasons, everyone has to accept that Dalit women have a right to culture and especially a right to celebrate Bathukamma, as much as any other community celebrating it.

Politically, it is a welcome sign to see Dalit women in some places celebrating Bathukamma near BR Ambedkar statues or at their community halls or by keeping his portrait in the midst of Bathukammas. It may not prove beneficial immediately, but it is possible to imagine that they have absorbed the spirit of Ambedkar’s revolutionary thoughts by placing his portrait at the centre of their celebrations, and tomorrow, they may recite the Preamble of the Indian Constitution through which he wanted to liberate them.

For the last few years, Vimalakka, a revolutionary singer and activist of the Arunodaya Cultural Federation, has been organising ‘Bahujana Bathukamma’ in a large-scale manner across the state. In fact, a similar event was also organised in front of the Osmania University Arts College building, which was at the epicentre of the Telangana agitation for separate statehood. A section of intellectuals in Dalit studies observed the phenomenon and have dubbed it as ‘sanskritisation’ and warned people not to fall into a trap. However, one could argue that this claim falls flat as Dalit women are simply reclaiming and re-asserting a culture that was once theirs.

This process of reclaiming and reasserting one’s culture will challenge the Hindutva forces that are trying to brand Bathukamma as a religious festival. Their embrace of the festival must be studied in the context of their communal, divisive mentality —  they’re happily willing to cite the atrocities committed on women during the Nizam era while clearly undermining the role of dominant caste feudal landlords in the same time/period. #KhabarLive #hydnews