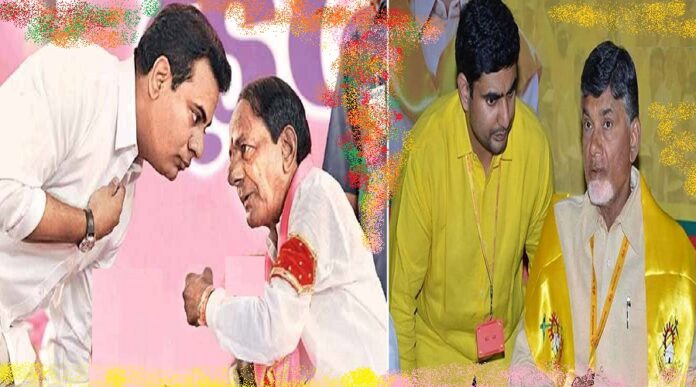 The Telugu states of Telangana and Andhra Pradesh heading towards the dynasty politics in quest of making heirs – as Telangana Chief Minister wants heir as his son already in the queue, the other side, DefeatedAndhra Pradesh former chief minister Chandrababu Naidu strongly pushing his son to take over his place further in Andhra Pradesh politics.

Family dynamics are intrinsic to the political narrative in India and the situation is no different in Telugu states. Members of several families known for their domination in the political landscape in their respective regions are in the fray for next month’s general elections in both Andhra Pradesh and Telangana.

Most of the politicians, dominating the political scene for decades in their respective regions, have managed to get tickets for their kin. Those who could not succeed made way for their successors. What is interesting is that members of some political families are pitted against each other as candidates of rival parties. The families which run the ruling parties in both the states and others considered close to them are ruling the roost.

Telangana CM and TRS supremo Chandrasekhar Rao hinted several times on his successor in the coming days. KT Rama Rao, who is a minister in the KCR cabinet is a front-runner.

During September 2019, on the floor of the state’s assembly, Telangana chief minister K. Chandrasekhar Rao deftly avoided what many see as the inevitable succession drama within his party. “I will not let my son (K.T. Rama Rao) succeed me as chief minister since I am hale and healthy and want to lead my state for three terms with full vigor.”

On the other side, having faced one of the worst defeats in the last assembly elections, TDP chief Chandrababu Naidu is struggling to keep his son in power.

As the letter bomb dropped by 23 senior Congress leaders to target the leadership of the Gandhis just ahead of the Congress Working Committee (CWC) meeting this week has brought into the spotlight the role of dynasty politics across all political parties in the country.

Yet another party appears to be beset with a similar crisis. The ‘sonrise’ planned by Telugu Desam Party (TDP) leader and former Andhra Pradesh chief minister N. Chandrababu Naidu has been rather a ‘sonset’ so far.

The letter to Sonia Gandhi had demanded an overhaul of the Congress party’s leadership, implying that members of the Gandhi family need no longer be the sole leaders of the party. The storm raised by this letter ended in Sonia accepting party leadership for another four months, with chances that her son Rahul Gandhi will lead the Congress once more after this period.

Naidu’s strenuous efforts to make his son Nara Lokesh, the crown prince of the TDP, failed when his party lost badly in both the state and the Lok Sabha elections last year. Lokesh himself suffered a humiliating defeat in the Mangalagiri assembly constituency in the capital region.

While Rahul, as the president of his party, led the Congress to a humiliating defeat at the polls in 2019, Lokesh faced the elections as a backroom boy in Naidu’s camp. The scion of the Nara family was projected as a chief minister in waiting during the TDP’s 2014-19 term; he was a powerful minister in the state cabinet who held the Panchayat Raj and IT portfolios. He was also made a member of the party’s highest decision-making body.

In fact, Naidu had apparently prepared the ground for his heir-apparent as long ago as in the run-up to the elections in 2009, giving the young leader the credit for “inventing” a novel populist poll plank, the Direct Cash Benefit Scheme for the poor.

Naidu had hoped that his son would succeed him in the state in the 2019 assembly elections so he could move into national politics. But his legacy plans went awry thanks to his party’s defeat by Jaganmohan Reddy’s YSR Congress.

Much like Rahul Gandhi, Lokesh failed to galvanize and inspire young voters in the last two elections in Andhra Pradesh, although he led the party’s campaigns from the front alongside his father. As a result, young voters drifted towards the more militant Jaganmohan Reddy and the theatrical Pawan Kalyan of the Jana Sena said a senior leader in the TDP who wanted to remain anonymous.

The TDP has changed a great deal since it was founded by movie mogul N.T. Rama Rao nearly four decades ago. Naidu struggled hard to reinvent himself in the fast-changing political world after he succeeded his father-in-law in the August coup of 1995, recalls political analyst Raka Sudhakar.

Meanwhile, Jaganmohan Reddy grew out of the shadow of his father, Y.S. Rajasekhar Reddy. Sudhakar believes that it is unlikely that Lokesh will succeed in the TDP’s dynasty politics if he fails to reinvent himself as his father did and become relevant to politics as they are today.

YSR, as Rajasekhar Reddy was popularly known, was killed in a helicopter crash in 2009 soon after he drove his party to power for a second term. His son Jagan Reddy subsequently floated the YSR Congress and went to the polls in 2014 as Rajasekhar Reddy’s heir.

He was defeated at the polls but later emerged as a self-made leader in 2017 when he began a grueling 3,648 km padayatra (foot march) over 341 days through all the districts of Andhra Pradesh. This brought him a landslide victory in the 2019 assembly elections in the state.

Political analysts believe that Lokesh needs to be as innovative as Jagan Reddy and discover narratives alternative to Jagan’s party if he wants to make his way in succession politics.

For instance, Chandrababu Naidu had promised to produce a world-class capital in Amaravati after Hyderabad went to Telangana when Andhra Pradesh was bifurcated. But Jagan’s story was that the focus on Amaravati triggered regional imbalances, with the backward Rayalaseema and Uttarandhra areas at the receiving end.

When Jagan came to power, he recommended distributed development in the form of three capitals – the legislative capital at Amaravati, the executive capital in Visakhapatnam, and the judicial capital in Kurnool – as a counter to Naidu’s Amaravati-centric development paradigm.

It is evident to see which side the circumstances make a move and who will take over the dynasty politics in Telugu states. Let’s wait and watch! #KhabarLive #hydnews