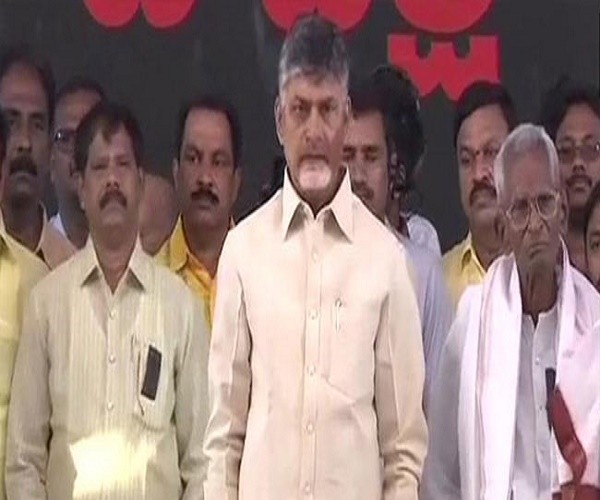 Interestingly, he said the YSRCP-sponsored bandh has caused Rs 12 crore loss to the APSRTC. But, today, he himself is fasting and not just that, he is making all his cadres to fast wherever they are. The total cost of the arrangements for Chandrababu’s fast is said to be around Rs 30 crore.

The fast site, Indira Gandhi Stadium, has been fully decked up. Tents are being erected to enable 15000 persons sit at the site. There would be very good sound systems and the stage would be decorated aesthetically. Coolers have been installed. Those sitting on deeksha would be supplied with cool drinks and butter milk.

Colleges and DWCRA groups have been asked to send their members so that there is a good attendance at the deeksha site. 200 RTC buses and 100 private buses have been pressed into service. The whole expenditure is being born by the state exchequer. The party is taking no chances as the earlier Nava Nirmana Deeksha at Vijayawada was a complete failure and empty chairs greeted Chandrababu.

Meanwhile, ridiculing the day-long breakfast to dinner deeksha of Chandrababu Naidu, YSR Congress has said the fast has cost the ex-chequer Rs eight crores and the event is aimed at eking out political mileage and has nothing to do with Special Category Status (SCS) but it has ended up as an extravagant entertainer.

Speaking to KhabarLive, Party MLA RK Roja said, the 4/20 fast is only a farce and a meek attempt to redeem his lost ground in wake of the tremendous response YS Jagan Mohan Reddy has received in Krishna district as Chandrababu Naidu has never bothered about people SCS or any other peoples issue.

Our Party President YS Jagan Mohan Reddy was on indefinite fast demanding SCS for seven days and our five MPs after resigning from Lok Sabha sat on an indefinite fast and there were numerous other protests demanding SCS which were genuine and this fast of Chandrababu Naidu is nothing but a sham and has taken the shape of an entertainment programme aimed at accumulating political mileage,.

Had the Chief Minister done this fete at Delhi that would have been more effective but it only publicity that he wants and his supportive media has been blaring all the noise to drum up his support, she said.

Had his MPs resigned from Lok Sabha with all 25 MPs quitting en masse, it would have given a very impressive impact and the SCS would have caught the attention of the nation.

The fast has cost the ex-chequer Rs 8 crores which is absolutely not necessary and is only to cover up his failures and deeksha carried out between breakfast and dinner has no value.

Film star Balakrishna in his address from the deeksha stage has been very incoherent and lacked any reason or justification, she said. #KhabarLive