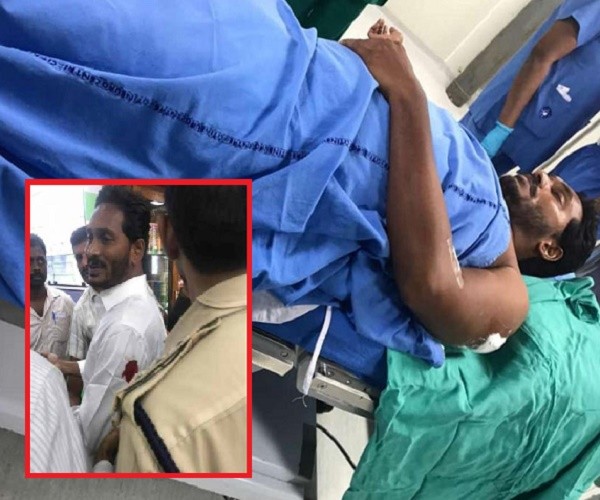 The attack on the YSR Congress Party chief Y S Jaganmohan Reddy by a waiter in the Visakhapatnam airport lounge on Thursday afternoon raises disturbing questions about VVIP security in protected and sanitized areas like the airports.

The assailant, later identified as Srinivas working in the restaurant in the airport used a small sharp knife which is tied to the legs of cocks in cockfights and could have been extremely dangerous. Luckily the YSRCP chief managed to duck and received the laceration on his left shoulder. He was given first aid in the airport and then flew to Hyderabad where a large contingent of policemen escorted him to his house.

The attack on Jaganmohan Reddy raised the political heat in Andhra Pradesh, where he had taken up a people’s contact programme christened ‘Praja Sankalpa yatra’ walking the entire length and breadth of the State highlighting the failures of the ruling Telugu Desam Party. The attack elicited all round condemnation. The Civil Aviation minister Suresh Prabhu went on twitter to condemn the attack and declare that a high level enquiry has been ordered into the security lapse. The Governor ESL Narasimhan called up the AP police chief RP Thakur to enquire about the incident.

The YSRCP legislator and actress Roja saw a sinister design in the attack on Jaganmohan Reddy. There were doubts expressed over whether the small but sharp knife being was laced with poison, but these apprehensions were dispelled later.

Meanwhile, the assailant, who was overpowered by some policemen present in the lounge was handed over to the police who took up investigation. It was said that he had a long letter on his possession, but contents of which were not yet released to the media. It was not known how the restaurant waiter managed to take a sharp edged knife inside the airport premises, which is under the control of the Central Industrial Security Force (CISF).

In the first reaction from the AP government, its Panchayat Raj minister Nara Lokesh used twitter to condemn the attack on Jaganmohan Reddy. “Such cowardly attacks have no place in the modern society”, the minister, who is also the son of AP Chief Minister N. Chandrababu Naidu tweeted.

Telangana IT Minister KTR has condemned the attack on YS Jagan. In a tweet, he also said that the culprits should be punished severely.

The All India Majlis Ittehadul Muslimeen (AIMIM) chief Asaduddin Owaisi condemned the attack on Jagan saying it was a major security lapse which should be probed. He asked the Civil Aviation minister Suresh Prabhu as to how a person could bring a dagger inside the airport lounge. Owaisi said the attack showed the vulnerability of politicians with this “new phenomenon of selfies”. #KhabarLive