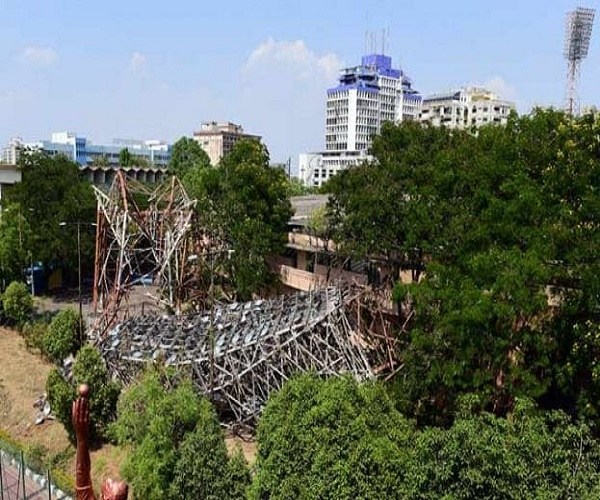 A day after a floodlight tower collapsed at the Lal Bahadur Stadium claiming the life of one person, the Greater Hyderabad Municipal Corporation (GHMC) has sought an assessment on the structural stability of various facilities at different stadia in the city.

On Monday evening, during the heavy winds and rain, one of the four floodlight towers at L B stadium came crashing down killing an employee of GST. At the same time, heavy winds blew away a canopy at the Uppal cricket stadium.

These incidents prompted the civic body to seek a complete assessment of the facilities such as floodlight towers, stands and other vulnerable structures. The study and assessment is expected to be carried out by experts from Jawaharlal Nehru Technological University (JNTU), Hyderabad.

While, the Sports Authority of Telangana State (SATS) manages LB Stadium and Gachibowli Athletics Stadium, the cricket stadium at Uppal is managed by the Hyderabad Cricket Association (HCA). All the three stadiums are equipped with floodlight towers, besides expansive canopies, stands and other structures. Following the LB stadium incident, GHMC instructed SATS and HCA to get the structural stability assessment of these structures carried out to prevent recurrence of Monday like episodes.

“Notices are being issued to SATS and HCA to get the structural stability assessment of the stadia done by JNTU and other experts. Once the report is submitted, future course of action will be decided based on their observations and recommendations,” said GHMC Zonal Commissioner Musharraf Ali Faruqui.

The historic L B Stadium, also known as Fateh Maidan, was constructed long ago and the floodlights were installed in the early 90s. Of late, not many sporting events are being organised at the stadium and it is turning into a venue for political and other programmes.

There is no periodical maintenance of the floodlight towers at the stadium, the GHMC official said. So much so, the electricity department had disconnected power supply to the towers a few years ago. They are being operated on temporary power generators during events, he said.

Though, major sporting events and tournaments are organised annually at Gachibowli Athletic Stadium, the structures here need maintenance. The multi-floor building, which is constructed to accommodate players during any major event, has been vacant since many years. As a precautionary measure, the GHMC wants SATS to get the structural stability of the floodlight towers and other structures in the stadium.

Similarly, the municipal corporation instructed the HCA to get the structural assessment of the floodlight towers and other structures at Rajiv Gandhi International Cricket Stadium at Uppal. One of the canopies at the stadium was blown away on Monday night. Since there was no match and the stadium was empty, there was no untoward incident. However, the civic body wanted the assessment done of such structures too.

Notices to cell towers managements, ad agencies
The GHMC is also serving notices to the managements of cell towers to get the structural stability of the towers done by experts or by Osmania University or JNTU Engineering wings and submit the same. Similarly, advertisement agencies have also been directed to clear flexies on hoardings set up on major thoroughfares in the city to avoid any mishaps.

Last year, the corporation had directed the agencies to get structural stability of unipoles and hoardings in different areas. There were not many incidents of hoardings collapsing in the city this season, said GHMC Commissioner M Dana Kishore.

Canopy trouble for HCA yet again
The canopy issue has come back to haunt the Hyderabad Cricket Association (HCA). The day after the rain and the strong winds, the major portion of the stands at South end looks open at the Rajiv Gandhi Stadium on Tuesday.

It could be a tricky situation for the HCA and the Committee of Administrators (CoA) panel of Justice (retd) A R Dave and Justice (retd) G V Seethapathy and Ratnakar Shetty.

HCA CEO C Panduranga Murthy said they are looking to address the problem. Luckily, the canopies were insured last year. “We have identified three agencies to do the repair and with the approval of CoA panel, we would call for tenders,’’ he added.

The canopies at North and South Stands are mired in controversy. The much-needed canopies came up in these two stands only in 2012 but ran into controversies because of alleged misappropriation of funds.

Apart from allegations of corruption, the structural construction of the canopies also put the then Arshad Ayub-led HCA in sort of embarrassment as players complained against the shadows that fell from the canopies on to the ground.

It was felt that the gap between the canopy and the floodlight towers was very less. As a result some of the lighting fell on the canopy and there was a shadow from the two stands that stretched on the ground leading to complaints by the batsmen.

Facing the flak, the HCA had to ask the people concerned to solve the problem. With no possibility of raising the already controversy-ridden canopy, the technical people suggested four `focus’ lights on either side of the Stands so that there would be no reflection of the lights from lower ends of the towering floodlights near those places. That helped and there were no direct shadows on the ground. But now with a gaping hole on Southern Stand, the issue of shadows would once again trouble the batsmen.

But for curator YL Chandrashekar and the ground staff, it would be nervous moments till BCCI take a final decision. If the final is allowed to be played, then it will be second time after 2017 that HCA will host a final here. The wicket and the playing field have come in for high praise from the players, teams and BCCI. But looks like nature’s fury had the last laugh.

The city which witnessed unseasonal rains accompanied by strong winds on Monday that also brought down one of the four massive floodlight towers near the tennis court at Lal Bahadur Stadium raising questions about the structural stability of the other three towers. #KhabarLive