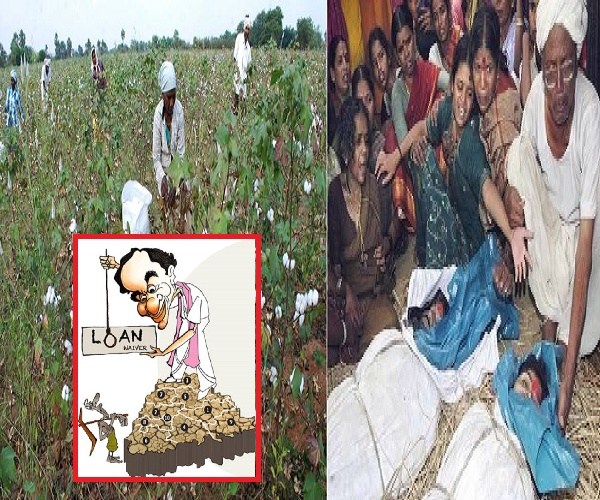 In Telangana, Siddipet is the bastion of the ruling TRS, has witnessed one of the highest number of farmer suicides in the state. Despite KCR’s several farmer related populist welfare schemes, the rate of suicides is alarming.

A few kilometers from Siddipet town, in the village of Medinipur, lives 35-year-old Boorugu Lakshmi. In 2017, Lakshmi’s husband Narasimhulu killed himself after he couldn’t repay a debt of Rs 3.5 lakh. The couple had taken four acres of land on lease, and when the market price of cotton crashed that year, they were faced with huge losses. Heartbroken, Narasimhulu had killed himself.

Like Narasimhulu, several small farmers, who got into cotton cultivation have taken their own lives faced with mounting debts. A study carried out by Rythu Swarajya Vedika (RSV), a farmers’ organisation, along with Tata Institute of Social Sciences (TISS) in 2018, found that since 2014, an overwhelming 81.4% of suicides in the state were of farmers who cultivated cotton. The study based on 700 cases also stated that 93% of those who killed themselves were marginal farmers. RSV’s study also revealed that 520 of them were tenant farmers.

By all accounts, cotton cultivation in Telangana is a big gamble. But two years on, Lakshmi continues to grow cotton in the half acre of land that she owns. “What choice do I have?” she asks, “With cotton at least I have a guarantee of getting back my investment. There is no such hope in other crop production.”

Why farmers continue to cultivate cotton
Cotton is a cash crop cultivated not just in Siddipet but across Telangana. Cultivating cotton requires deep pockets but promises high returns. However, the cash crop comes with a very high rate of failure.

Despite the alarming rate of farmer suicides, cotton cultivation has witnessed an exponential growth in the state. Telangana is the third highest in terms of cotton cultivation and production in India, after Gujarat and Maharashtra.

Cultivation, however, fell by over 20% in 2016-17, with fluctuating prices in both the domestic and international market pegged as the reason. The Centre had also removed export subsidies on cotton, which came as a huge setback for farmers.

It was at the time that Chief Minister K Chandrasekhar Rao appealed to cotton farmers to grow alternative crops.

But farmers like Lakshmi say that cotton is still a better bet than other crops. “After meeting all the expenses like labour, pesticides etc we make Rs 10,000 a year, if we cultivate cotton,” Lakshmi explains. This, she says, is still more than what they would get with any other crop.

One reason that farmers cite for this decision is the lack of rainfall – cotton, they say, requires less water than other crops.

Farmers say cotton needs less water, experts disagree
Telangana had recorded a 17% rainfall deficit (699 mm against the normal of 845 mm) in 2018. According to a study on the Telangana’s groundwater for the period of June to December 2018, the state’s average water level stood at 11.15 m bgl (below ground level) as compared to 9.05 m bgl during the same period in 2017, a decline of 2.10 m. In around 9% of the state’s geographical area, the ground water level is deeper than 20 m bgl. This includes districts of Siddipet, Medak, Sangareddy, Kamareddy, Rangareddy, Nagarkurnool and Vikarabad districts which received less rainfall.

Farmers say they opt for cotton since it requires less water unlike other cash crops like chilies. “Cotton requires a good spell of rainfall after sowing. A good rainfall in the beginning is crucial but after sowing the crop doesn’t require much water.”

However, this is a false notion says, says agriculture scientist Dr GV Ramanjaneyulu. Like any other crop, cotton also requires water, and good rainfall gives a good yield.

“Cotton requires as much water as paddy. It is a wrong belief that cotton doesn’t require much water. For cotton, there has to be favourable soil and adequate water, else the harvest will be low and it would be deemed a failure,” he explains.

Ramaiah, however, disagrees, “Compared to paddy and chilly, cotton doesn’t require so much water,” he says.

‘Monkeys don’t let anything else grow’
Monkey menace is another practical reason why farmers prefer cotton over other food crops. Deforestation in the state has driven out monkeys from forests, forcing them to raid villages and agricultural fields.

The problem which started in 2008 has only escalated further and spread to other districts as well. In 2013, the Telangana government found that Adilabad, Nirmal, Mancherial and Kumram Bheem Asifabad districts were the worst affected by the monkey menace. As a temporary solution, the government had in 2018 allocated Rs 30 crore to drive out the monkeys.

“The menace of monkeys is severe. They don’t let maize or any other crop grow,” says Lakshmi, “They have now started eating cotton flowers too.”

Beeram Ramulu, a farmer activist who has been working in the region says, “It’s like the monkeys are taking a call on which crop to produce. Though several farmers have been avoiding other crops like maize, tomatoes, beans and have shifted towards cotton, due to hunger monkeys are eating these cotton flowers before they bloom.” He recalls, “Two years ago, the Gram Panchayat of Chityala in Cheriyal mandal had pooled in money and hired a Langur to shoo away the monkeys. This was quite effective. However, the Langur escaped from captivity later.”

‘Land not suitable for cotton cultivation’
But there’s more to the woes of a cotton farmer. Telangana has traditionally been a cotton producing state, particularly the northern region of Karimnagar, Nalgonda, Adilabad and Mahabubnagar, which has black soil. However, there has been a steep growth in cotton cultivation in other parts of the state since 2008, says agriculture scientist Dr GV Ramanjaneyulu. Several other regions have taken to cotton despite conditions for its cultivation being unsuitable, he observes.

Ramanjaneyulu also notes that cotton cultivation in the tribal belt of Adilabad is leading to malnutrition in the region. “There is a severe crisis of malnutrition in Adilabad as everyone has moved from food crops to cotton although only 10% of land is suitable for its production. This crisis has to be addressed immediately,” says the scientist.

As per the findings of the National Family Health Survey (NFHS-4) 2015-16, Adilabad recorded one of the highest malnutrition figures in the state. According to the report, after Medak (37%) and Nizamabad (36.3%), 35% of children under 5 in Adilabad were underweight. Thirty-eight percent of children under 5 in the district were stunted – the highest in the state, while 22.1% were wasted.

Seed companies cheating farmers?
Rajeshwar, another farmer from Siddipet alleges that cotton seed companies are also to be blamed for the suicides. “These companies sell bogus seeds promising high yields, it is a menace. No company is reliable, each time it is a gamble for the farmer. When the crops fail because of fake seeds, the farmer would take his own life rather than going on a legal fight with a mighty seed company,” he laments.

A scientist who is the head of cotton breeding, at a well-known seed company admits the same, noting, “The GM seeds aren’t resistant to all the pests. However, we can’t deny that many pests have evolved over the years and are ruining the yield.”

He claims ‘mismanagement’ as one of the reasons for the pests evolving and adapting to the conditions. “Generally, the farmers should also plant non-GM seeds surrounding the field, so that these pests wouldn’t have been pushed to evolve. This is not to blame the farmer, but the government bodies should have advocated this,” he argues.

While farmers have been painted as greedy for shifting to cotton cultivation despite being aware of the huge risks, Ramanjaneyulu says that the state must be proactive when it comes to preventing farmer suicides.

“The seed companies sell 1 crore seed packets in Telangana which is huge. They should impose a restriction on it. Depending on the region, seeds should be distributed. The onus is on the government to advise farmers about cropping patterns and to limit cotton production,” he says.

Weighed down by debt and with three mouths to feed, Lakshmi says she has limited options. “The little compensation I received went for the debts that I took for the funeral of my husband and the previous loans. If I have to survive and educate my children, I have no other choice but do farming. My daughter will soon get married. I need to make enough money, and for that I need too continue cotton farming.” #KhabarLive