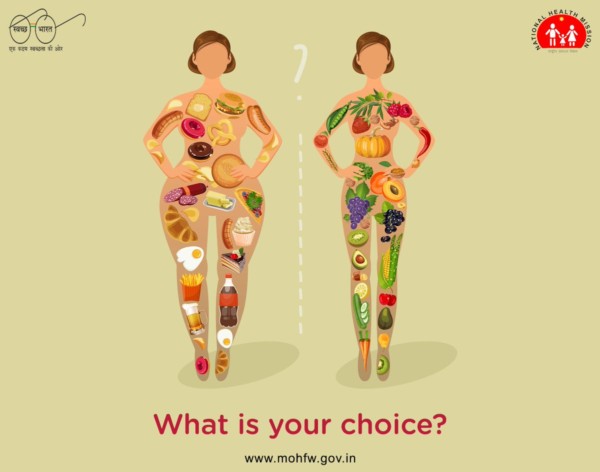 In a set of tweets the Ministry is making some rather judgemental observations on how to ensure you consume nutritious food. The Ministry of Health’s now deleted tweets over the last couple of days may have been meant to encourage ‘good nutrition’, but the graphic accompanying it only encourages vegetarianism and fat-shames.

The graphic shows the outlines of two women, with different figures. One is visibly larger, and contains meat, eggs, bread, burgers, beer, doughnuts, fries and fizzy drinks. The other is lean and contains exotic fruits and vegetables that are deemed available and affordable for the typical Indian woman, like avocados and raspberries.

The subtext of the tweet is obvious: what is your choice? Would you rather be fat and non-vegetarian or thin and vegetarian?

The Ministry of Health has done some commendable campaigns like those of menstrual hygiene and tuberculosis. But this tweet may be proof of the Ministry of Health’s fixation on propagating vegetarianism as a way of life. In the past, it has even proposed a switch to “vegetarian medication” which the pharmaceutical industry rejected.

The tweeted graphic unfairly equates health not only to weight, but vegetarianism as well – reinforcing several damaging notions.

First of all, it’s not the government’s business to shame you, even if you’re overweight. Yes, obesity is a very real problem in India, but at the same time the country also has the most underweight people. It is the government’s job to make sure people have access to adequate nutrition.

Warning people, without any rationale, against protein-rich foods like meat and eggs doesn’t help. Eggs are still officially part of the mid-day meal in some government schools, but has been substituted with banana in some state schemes so as not to hurt the “religious sensitivities” of vegetarian students.

Linking health with vegetarianism is also casteist. The obsession with defining itself as vegetarian and renouncing all forms of meat is allegedly based on history. But the pre-existing perception of India as a “vegetarian nation” was proved to be inaccurate years ago. Even though the number of non-vegetarians in India has come down, 70 per cent of Indians are still non-vegetarian.

And then there’s the use of a woman’s body. It might be an innocent creative decision, but women remain the target of multiple industries that profit off their insecurities.

The graphic is made for an urban audience, so of course the message has been tailored to reach only the more privileged strata of society. It was posted on Twitter with an English caption, which clearly indicates the target audience. Yet, the choice of foods is Western. For example, the graphic has pretzels and raspberries, both of which are expensive and are exotic to even urban Indians.

Basically, the Ministry of Health is asking you a weightist, casteist, privileged question: if you’re not eating expensive, organic food and drinking superfood smoothies, what are you doing? #KhabarLive