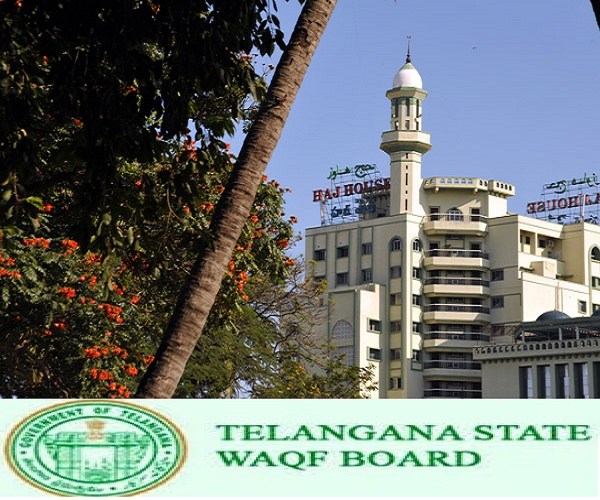 Telangana wakf board always in the controversy of doing illegal works and scams. The wakf board is acting on the instructions of land grabbers and big politicians. It is noted that the internal wakf properties are being illegally transferred and selling to others. The recent incident which uncovered the truth and facts of the responsible authorities,

Due to the inaction of the Wakf Board, a tenant of a Wakf property attached to the famous dargah Yousufain divided the property among his family members and registered the partition deed. He not only mortgaged the property with the Darussalam Co-Operative Urban Bank Ltd, but also leased out the property to a sub-tenant.

Another possessor of a Wakf property attached to the dargah alienated possession to a nearby mosque whose managing committee has constructed a building without obtaining permission from the Wakf Board.

According to documents, Syed Ahmed was the tenant of five shops. He sub-leased the shops to others at higher rates while he paid only Rs 6,000 per month. He stopped payment in 2016, but paid 13 months’ rent through a demand draft in January 2017.

Later, he took the advantage of the tussle between the Wakf Board and the mutawalli and secretly mutated the Wakf property in his name. He succeeded in registering a partition deed with the Joint Sub-Registrar, Hyderabad, claiming that the Wakf property was their ancestral property on 13-04-2017. Syed Ahmed also deposited the partition deed in June 2018 to obtain a loan of Rs 1,00,000.

A letter of mutawalli Abul Fath Syed Shah Hassan Shabbir revealed that another tenant of dargah Yousufain alienated his possession to Masjid Gul Banu. The mutawalli reported that Mohammed Abdul Salaman who possessed a godown near the zanani gate of the dargah, a property admeasuring about 432 sft and worth Rs 50 lakh sold this to the management of Masjid Gul Banu and the latter, a Wakf institution constructed a G+1 structure.

The mutawalli said that though he is the custodian of the institution, he was deprived of financial powers and miscreants were taking advantage of the situation. He alleged that Wakf Board employees failed to collect rents regularly from tenants. Board officials failed to take prompt action against defaulters and there was a lack of coordination between higher officials and their subordinates, leading to slow moment of files and growing misdeeds.

ALSO READ:  Why KTR Is Being Pampered As Future CM By TRS Cadre In Telangana?

Caretaker of the dargah and Inspector Auditor, Circle 3,4 & 6, have also submitted a report to the Board on 21-04-2019 that Syed Ahmed who was not paying the rents to the Board, had approached the City Civil Court and issued notices to the sub-tenants. According to Wakf Rules, the tenant of a Wakf property has no right to sub-lease the property. They also pointed to other defaulters of Wakf properties attached to the dargah. #KhabarLive