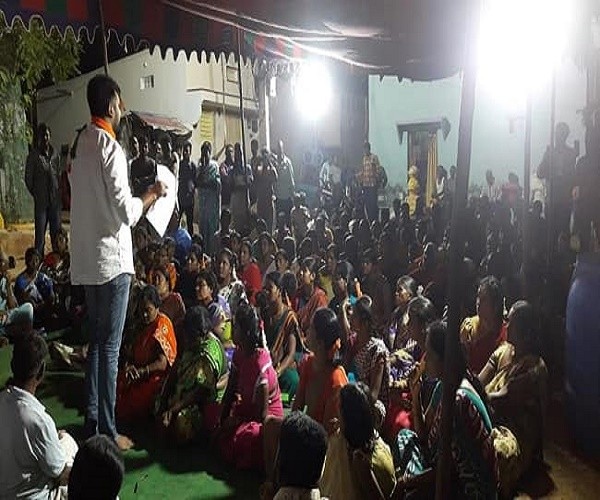 A Congress leader in the Secunderabad cantonment is winning hearts after he began a campaign titled ‘Basti Nidra’ or ‘sleeping in the slum’ to understand the issues of the locals in the area.

Telangana Pradesh Congress Committee (TPCC) spokesperson Manne Krishank says that 12 such campaigns have been conducted in seven wards of the cantonment, where people come forward and speak about their local issues before sharing a meal and spending the night there.

The meetings have been successful with at least 200 people turning up each time, the Congress leader says.

Owing to its large civilian population, Secunderabad was classified as a Category 1 cantonment under the Cantonment Act of 2006.

The Secunderabad Cantonment Board (SCB) is a local municipal authority that comes under the administrative control of the Ministry of Defence, and functions as a local self-government.

Elections are held every five years, and half the members on the board are civilians and the other half are military nominations.

Krishank says that Basti Nidra was in the works since January this year and started in June, but was expedited after over 28,000 voters in the area’s slums potentially lost their voting rights.

In July, the SCB said that it had removed the names of 28,123 voters of the total 1.91 lakh voters — most of whom were slum-dwellers — and claimed that they had ‘illegally encroached’ on defence land that belonged to the central government.

“Even the people whose voting rights have not been taken away continue to live in pathetic conditions. This is the reality. So out of this idea, Basti Nidra came up,” Krishank says, noting how people in various many slums continue to live without basic amenities like electricity or sanitation.

“I’m not here for an answer, I’m here for a solution. I didn’t plan this thinking that KCR would go for an early election. We started this in June. Things are pacing up now. Many people are asking me to come to their area and highlight their issues. This is a medium where people can talk peacefully about their issues. I’m against taking a cavalcade and waving at people and leaving, because people will never know me. I can’t make false promises and leave. I am learning about them and they are learning about me,” he adds.

The Congress leader says that he spent his entire life in Secunderabad, having studied at St Patrick’s High School and then Loyola College, before pursuing his further education at Osmania University — where he was plunged into the Telangana movement for separate statehood.

Krishank soon became an important member of the Osmania University Joint Action Committee (OUJAC) and later joined the Congress, but did not get a party ticket in 2014. However, he says that Basti Nidra has a feeling similar to his initial days.

“It is reliving the experience of the Telangana movement, where the main experience and maturity came from when we went into people. When I lost my ticket in 2014, many asked me if I felt bad. But 2009 to 2014 was a great learning experience for me. We used to do everything with the locals. I wanted to reproduce that in the cantonment area,” Krishank says.

“Each area has its own issues. There is so much to learn that I almost feel good that I lost my ticket in 2014. At this point of time, I’m really satisfied that as an opposition leader, I now am equipped with an understanding of what to do tomorrow if I get elected to the Assembly,” he adds.

“Generally, I give a call to youngsters and pass a pamphlet around informing people that we are coming and around 20 to 30 of us go to the slum. This is working out. This is beyond politics. Every basti in every ward should be addressed. Eating together is another important aspect, as everyone present sits down in a row after the meeting and shares a meal,” he says.

“Even during the rain, 150 people have turned up. The highest number was 750. Many local politicians allege that they are coming just for the food. If that was the case, we would have served dinner at 8:30 pm instead of 11 pm as people continue to talk late into the night. Gone are the days that a feudal leader will come and fight for you. We encourage the people to fight for their own rights. Nobody knows local issues better,” he adds.

ALSO READ:  Late Arrival Of Ambulance Cause For Lost Of Precious Lives In Hyderabad

The Congress leader also says once locals are comfortable talking about their issues, the anger is evident in their voice.

“I begin talking and ease them in but once their anger and fury is out, nothing can stop them. Development is being handpicked through local leaders on favourite areas, which means that many people are excluded from many government schemes. This is evident when they start speaking,” he says.

When asked about what kind of people speak the most, Krishank says “I should mention women, because they are always the most passionate about the problems in their area.”

“The common perception and mindset among political leaders is that none of us can enter a basti after 6 pm. We are breaking that and showing that bastis are not so bad. They are victims of their circumstances. They want people to hear them as well. They have immense ability to mobilise and fight for their own cause. Tomorrow, even if I win the election, I would like to continue this trend,” Krishank adds.

Krishank says that cantonment leaders are stuck between the Greater Hyderabad Municipal Authority (GHMC) and the SCB on one hand and the state government and the Local Military Authority (LMA) on the other.

“The situation is the same with these people as well. We needed to go to them and understand their pain and problems. We need institutional changes in the cantonment, whether it is cleaning up the streets or fixing some of the worst roads in the city in areas where there is a dense population. Not everyone travels like Telangana Chief Minister K Chandrasekhar Rao in luxury cars,” the Congress leader says.

“Many places don’t have toilets because they aren’t given permission to do so and they are under constant vigil by the LMA, because they have been categorised as encroachers. There are massive boards which say ‘trespassers will prosecuted’ in a bid to create an atmosphere of fear. Why is this happening? Because the government is not asking for exchange of land for these people. Instead, it wants land for a new Secretariat. All the issues are interlinked,” he adds.

Krishank is referring to is Chief Minister K Chandrasekhar Rao’s plan of building a new Secretariat at Bison Polo Grounds. KCR also has sought the transfer defence land to the state for the construction of flyovers as part of the Strategic Road Development Programme (SRDP). Following the announcement, hundreds of Secunderabad citizens, including Krishank, protested at the ground for days together.

“The identity of the cantonment is at threat. There is a large green cover here, but many have asked to shift the entire army because of small issues in the area. Even if that is so, can someone give me a guarantee that the area will not be taken over by the real estate lobby? The army has to stay because they are protecting the environment here,” Krishank says.

“If a Secretariat comes there even as people are losing their voting rights and the skyway soon follows, environmentally, life would be choked here. You can build a city, but not at the cost of trees. People have been living for 60 to 100 years, and they have come here to make a living. We can’t bulldoze our way through. We should instead open a dialogue. The least we can do is give them housing,” he adds.

The Congress leader also feels that the upcoming election will be a tough fight, as he will be fighting against a seasoned MLA.

“I have the vision and conviction to take people’s issues to the government in power. Tomorrow, if KCR wants to build a secretariat, he has to cross me. If I could gather 500 people as an individual, I can gather 5,000 as an MLA. Can he put all of them in jail and build a secretariat? This is a fight to protect the cantonment where I’ve grown up,” Krishank says. #KhabarLive